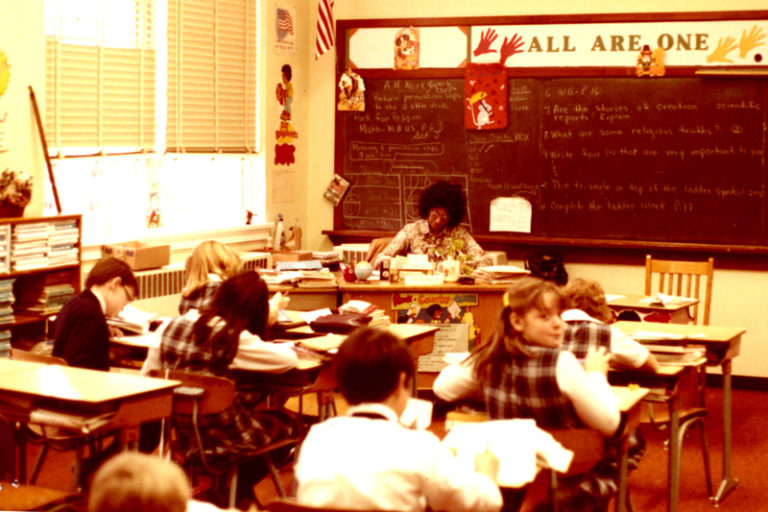 Dolores Poindexter’s Decades in the Classroom Influenced Hundreds…Including Herself

If you want to undertake an exercise in amused frustration, try having a conversation with Dolores Poindexter in a public place. Just try. Walk with her through the mall, the streets of Downtown Frederick, or after mass at St. John the Evangelist Catholic Church, where you can find her every Saturday evening. See if you can go more than five minutes without being interrupted by someone wanting to say hello or talk to “Mrs. P.”

That’s because Dolores Poindexter is a genuine celebrity, or at least “Frederick famous.” She got that honor by teaching at St. John Regional Catholic School for 35 years, molding hundreds of young minds—“my babies,” as she calls them—with a combination of old-school firmness and a trademark sense of humor.

Her babies, some of them multiple generations of the same family, grew up to become parents, professionals, teachers themselves, civic leaders, even the mayor.

So, she doesn’t get the pleasure of a public appearance without an interruption, not at age 85 and nearly two decades after her retirement.

And she doesn’t mind it a bit.

“I’m just glad they still remember me,” she says, smiling.

“She broke me” says Frederick businessman Tony Checchia, who recalls not being a bad student in Mrs. P.’s sixth-grade class back in 1980, but he was definitely underachieving. He liked to talk, socialize too much and look for shortcuts to get through the classwork. “Mrs. P. recognized right away I had much more potential than I was showing,” he says.

One day, Mrs. P. marched down her classroom aisle, heading straight for his desk. She had a paper in her hand, which she slammed on his desk. Teachers don’t do this often, so he was worried, but then … “She grabbed me and she hugged me,” Checchia says, becoming emotional in recalling the incident.” The assignment she pounded on his desk was marked with an “A.” “She said, ‘You see? I knew you could do it.’”

Like many former students, Checchia recalls Mrs. P. purposely pointing to her students—the jewelry and stylish outfits all part of her unofficial uniform—but with a genuine caring for making them better, in and out of the classroom. “You feared her, but you loved her,” he says.

It would be hard, maybe impossible, to find someone who went to St. John grade school in the 1960s, ‘70s, ‘80s or ‘90s who doesn’t remember Mrs. P. Recently Checchia and other former students took to social media to share Mrs. P. stories and to marvel at the influence she had on their lives.

“We were all blessed,” he says.

“Always Wanted to be a Teacher”

But, after much asking, cajoling and outright begging, here she sits at the dining room table of her West All Saints Street home, telling her life story from carefully written notes she prepared in advance of her interview.

This is the same three-bedroom, one-bath house where Dolores Roberts, or “Little Lossie,” was born and raised. She was an only child to a mother who worked as a domestic and a father who was a waiter at Hood College. The family was Catholic, which made the Roberts something of an oddity in Frederick’s African-American community that revolved around the Asbury Methodist Church just down the street. Her family had to walk blocks to St. John.

But that was to the church, not to the school. She went to Lincoln Elementary and graduated from the all-black Lincoln High School in Frederick’s racially segregated era.

She had a brief thought about becoming a nurse until her father warned her, “Girl, you cry too much.” But it was teaching that was always on Lossie’s mind. She would set up a blackboard on the front porch, instructing her “student” friends. Meanwhile, one of her aunts was a teacher who became a role model. “That was a big inspiration,” she says now, “and she encouraged me along the way to be a teacher. So, I always wanted to be a teacher.”

In 1950 she went to Maryland State Teachers College at Bowie, today known as Bowie State University. It was during her freshman year that she met the love of her life, Charles Poindexter. The couple married at St. John a few months after her graduation in 1954.

She taught on the Eastern Shore for a couple of years and then at some one- and two-room schools in Frederick County before finding her “second home” in 1963 at St. John, which was then next door to her church. With all due respect to Charles, it also became the second love of her life.

“Oh my God, I loved it,” she says of teaching. “To see their little eyes light up and say, ‘Oh, I got it!’ Or raise their hand and want to give you more information. I liked to see them motivated and get excited about something.”

She would stay at St. John until her retirement in 1999—along the way teaching in the third, fourth and sixth grades.

“I’m Not a Little Poodle”

It’s an understatement to say Dolores Poindexter found her career in the classroom rewarding. Her eyes widen and she even becomes emotional describing the best moments. “The reward comes when a child can come up with a concept you are teaching and they can understand it, and then can take a deep breath and say, ‘I got it.’ Or they want to share it. That was one of my biggest rewards.”

But she wasn’t afraid to ask for help, either. She cultivated parent volunteers, at first to handle duties like wiping off desks or opening milk cartons. But that led to the parents working individually with students in the hallway, going through flash cards to build confidence. “That’s all the kids really need, that extra reassurance. Sometimes in a classroom you just freeze up. I did. And I didn’t want that for my babies.”

One of those volunteers was Carol Ponce, who would become a paid aide at the school and a close friend of Poindexter’s. Ponce recalls marveling at Mrs. P.’s command of the classroom. “She was a disciplinarian and strict, but she was also a lot of fun,” she says.

One of her trademarks was snapping her fingers to get the attention of her students, a trait she developed early in her career when a supervisor told her he didn’t like the sound of raised voices. Dolores Poindexter improvised.

Alex Owen, who taught alongside Poindexter in the final years of her career, recalls stopping in his tracks the first time he heard the crack of her fingers snapping. “She said, ‘Mr. Owen, you can keep going. This is for the students.’”

Mayor O’Connor recalls the tough-but-fair educator who wanted the best for her students. “She was somebody who always struck me as always having the interests of the kids first and foremost,” he says. But she could do it with a sense of humor, too. O’Connor recalls students begging Mrs. P. to have recess outside on rainy days. “You can if you’re a duck,” she would tell them.

Her comedic skills are legend, even when applied for disciplinary purposes. More than a few students heard Mrs. P.’s maxim: “I have to jump down your throat and dance on your tonsils.” And homework assignments? “Treat this paper like a five-dollar bill. Don’t lose it.”

“I told them I’m not a little poodle,” she says. “I’m not going to stand on my hind legs and beg for their homework. That was their responsibility. They were growing up and they were going to have responsibilities in life.”

And those lessons, however small and funny, made a difference for many. Looking back at his pre-political career in journalism, O’Connor says he only now sees the path back to Mrs. P.’s lessons in language arts. “It would be hard for me to undervalue the influence she must have had” on me, he says.

“Only Plant Among the Flowers”

Dolores Poindexter is still firm but fair. Talk about something she doesn’t want to discuss and she will stop you with the same vigor she employed when halting traffic on Second Street during after-school car-rider duty.

For example, ask her about being the first African-American teacher at St. John.

“We don’t go there,” she says, with a smile and a laugh, but also a head shake that tells her visitor this territory is off limits. Maybe she’s still being humble, maybe the question raises issues she’d rather not revisit. The only other allusion to race she makes comes in describing her popularity today among former students: “I think they remember me so well because I was the only plant among the flowers.”

When pressed if she at least takes some pride in her groundbreaking role, she says softly, “No.” She insists she was just another teacher.

But she wasn’t just another teacher, and she was a groundbreaker.

The Rev. Kevin Farmer, pastor at St. John the Evangelist, recalls her telling him about her childhood, when she would watch the uniformed white girls of Frederick walking to St. John school, where she could not attend but would one day teach. “Which to me is a powerful reminder of how far we’ve come as a church,” he says.

“It could have been awkward, I guess,” she says of when she started at St. John—in those days before many of landmark episodes in the Civil Rights movement. “But I was accepted, and it was a second home. I loved my kids. I loved my parents.”

She will turn 86 on the 13th of this month, and other than an aching knee (don’t even think about suggesting surgery to her) she appears in good health. She’s certainly still quick enough for a friendly verbal spar, often with Charles.

Theirs is a genuine love story, built on family and faith, with many laughs mixed in. The same dining room table she’s using for her autobiographical notes has been the center of the Roberts/Poindexter universe for as long as anyone can remember. Holiday dinners, birthdays, Christmases were all celebrated here. Walls are covered with family photographs, and Charles spies a picture of a young Dolores Roberts. “There’s my brown-eyed girl,” he says with a grin.

When they were raising their three boys—Charlie, Wendell and Darren, now middle-aged men—they both worked extra part-time jobs to pay the bills and keep the kids in Catholic school. Dolores credits Charles for being there for the family when she worked evenings and weekends at women’s clothing stores. “I never did anything alone,” she says. “I’ve always had that support system behind me.”

They both enjoy routines now. A proud night owl, Dolores prefers Saturday evening mass, while you can find morning person Charles ushering at St. John on Sundays. To accommodate their differing preferences, he drives her to mass, drops her off and drives back an hour later to pick her up.

When her knee permits, she will walk down to La Paz Mexican Restaurant on a Tuesday afternoon, between the lunch and dinner rushes, to enjoy a meal and a margarita with Carol Ponce. Even though they intentionally go at a time of day when the restaurant has few customers, they are often interrupted by someone wanting to talk to Mrs. P.

Neither seem to mind.

“They are quite beautiful people now,” she says of her former students, tears welling in her eyes. … “It’s goose-pimply times sometime when you look at them, and to get the joy of seeing them tell me about their accomplishments. I like to know what they have been up to. It’s great.”