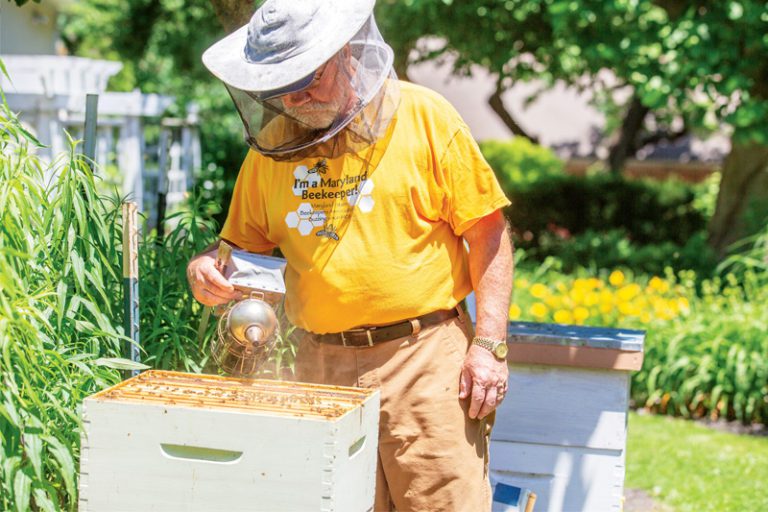 The honeybee is not only a great pollinator, it also apparently has powers of seduction. “I was petrified of bees until a friend convinced me to visit his hives. It was an instant addiction,” says Liz Baker.

Baker immediately started attending Frederick County Beekeeping Society meetings, eventually getting her own hives and serving as president of the organization last year. She now holds the position of outreach director. “Up close, I got to see how docile honeybees are. But after learning about them, you realize how truly amazing they are,” she says.

Dave Maloney of Frederick had a similar experience. He said “yes” to his son-in-law’s request to place a hive in his yard. Two weeks later, he paid for the hive and claimed it for his own. “I started reading about bees, and I really got hooked,” Maloney says. His lush garden is punctuated with bee boxes and sheds full of supplies. He continually educates himself about bees and teaches classes for the beekeeping society.

For Allen Winpigler, who lives near Lewistown, it was more the taste that reeled him in. “I was visiting with a relative and they needed help extracting honey,” he says. “I got stung a few times, but the honey was really good. By the next spring, I had four hives of my own. By the next year, I was up to 200 hives.” Today, Winpigler is a full-time beekeeper and runs Allen’s Apiary. He sells his honey locally at Frederick farmers markets and at the Common Market on Md.­ 85.

Whether it’s for the honey or the money, the number of beekeepers in Frederick County is on the rise and has been for the the last few years, according to Baker. Currently, her organization has approximately 200 members with about half being city residents. “I’ve noticed a lot more people in the city showing interest in keeping bees, which is great because you can do it just about anywhere, although we do encourage everyone to check with their homeowners association and, as a courtesy, their neighbors,” Baker says.

Most of the members are beekeepers, while others are in the learning process. And then there are those simply offering up their gardens for hives to improve pollination—a literally sweet arrangement that typically results in the gardener exchanging fresh veggies for honey.

Baker says the plight of the pollinator motivates many of the new members who have joined her organization in recent years. And while most losses today are not caused by colony collapse disorder—an issue covered heavily in the media a decade ago—honeybee populations are still struggling, according to Karen Rennich, executive director of the Bee Informed Partnership at the University of Maryland. “We just finished the annual report of hive losses. Beekeepers lost about 40 percent of their hives last year,” she says. Rennich cites three main causes: pests, pathogens and poor nutrition.

Asia’s Varroa mite arrived in North America in 1987 and has been causing problems ever since. The mites weaken the bees until they succumb to illness or cold. “Imagine that if the bee was as big as you, the mite would be as big as a dinner plate,” Maloney says. “And you’d have four or five of those hanging off you sucking the blood out of your body. The mites also introduce viruses, and we can’t treat for that.”

Treating for the mites requires vigilance and prompt action. “People think the bees just do their thing and we come along and collect the honey,” says Winpigler. “It was a lot like that until the mites arrived in the ’80s. That changed everything.”

As for nutrition, humans aren’t the only ones experiencing food deserts. “Maryland is one of the hardest places to keep honeybees because our nectar flow [the period when plants are in blossom] is so short,” says Rennich. “It’s about six weeks compared to somewhere like New York, where it is six months. We just don’t have the plant variety they do.”

“We don’t have the diversity and weeds we used to” have, says Maloney. “Farms often plant one massive crop instead of multiple crops. We spray weeds along the road. We do an extraordinary amount of spraying in this country. Mosquito spraying is a terrible insult to pollinators,” he adds.

Another reason more people are seeking out bees is simply for the honey. Not only does it taste good, there are many health benefits that come from using raw, lightly filtered honey. But finding a reliable source of that kind of honey is much harder than one might imagine. Food Safety News conducted a survey in 2011 that found approximately 75 percent of honey found on grocery store shelves and from big box stores was not pure.

Part of the issue is that the term honey is not well defined, leaving it wide open for “creative interpretation” and food fraud. Honey sold on a large scale may contain fillers such as water and corn syrup—and quite possibly, illegal honey.

“Honey laundering” typically involves honey from China, which carries high tariffs, being repackaged and sent to the United States via other countries. Not only does the dumping of cheap honey into the U.S. market drive domestic beekeepers out of business, it can present health concerns since the honey may be contaminated with heavy metals, pesticides and illegal antibiotics. In addition, the ultra-filtration process used to disguise the country of origin destroys the nutritional value of the honey.

The best way around this is to keep bees or find a trusted beekeeper. However, honey will be in short supply this year because the heavy rain through the first nectar flow in the spring prevented bees from foraging. Honey is typically harvested in July or August, giving the bees time to recover their stores for winter during the fall nectar flow.

The beekeeping society encourages anyone interested in beekeeping to attend one if its classes. “It can help you make the decision,” says Baker. “Plus, being a member provides ongoing education, mentorship, problem solving, sources for bees and supplies, and monthly guest speakers.”