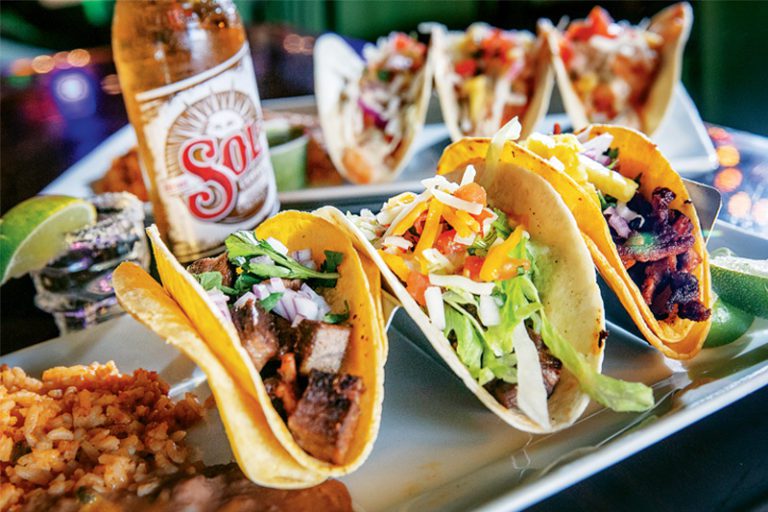 Tongues are wagging for Taco Daddy Cantina & Tequila Bar, one of Frederick’s newest Market Street eateries. The restaurant opened in February and quickly earned a reputation as colorful as its quirky Day-of-the-Dead-style skull logo, thanks to its late-night entertainment, substantial tequila assortment and potent margaritas.

People chat about them at the hair salon, comparing their most recent visits. Couples strolling by the festive facade point and remark to each other about wanting to try the place. Others surreptitiously peek at the plates of diners as they mosey past its windows. That’s fine with chef/operator Neel Kamal and his business partner, fellow chef Damian Portuguez. The pair met through work six years ago and it sparked an enduring friendship. Taco Daddy is their second project together and a return of sorts for Kamal, who got to know Frederick while working years ago at the former Bombay Grill at this same 137 N. Market St. location.

Kamal says the bar and restaurant are two sides of the same coin, transitioning seamlessly from laid-back lunches and family dinners to the late-night crowd looking for tasty food and spirited refreshments. The expanded bar—boasting more than 50 varieties of tequila from more than 20 brands —and entertainment are highlights of the concept, which Kamal says is unique among other Tex-Mex and Mexican restaurants. They’ve rolled out salsa nights and DJs spinning Latin music, with weekend hours until 1 a.m. Bar happy hours, Monday through Friday from 3 to 7 p.m., get the party started with food and drink specials, such as $2 tacos or $5 classic margaritas and $3 sangrias. During peak evenings, patrons pack into the bar or gather outside the door, waiting for their turn to get in. Its max capacity is about 100 people.

If tacos and tequila are a classic combo, fajitas and margaritas run a close second. Add the exuberant score of a Mariachi band and you have a real fiesta. Taco Daddy’s Tuesday special is two-fajita platters and two margaritas for $30, to be enjoyed while strolling musicians play from 7 to 9 p.m. Reservations are recommended, but not required. Mondays are Tres Amigos nights, with a special flight of three authentic tacos—spiced shrimp, sweet and savory pork, and lengua (beef tongue)—for $12.99. Lengua is popular in many parts of South America, but Kamal notes North Americans are catching on. “I’m sure everybody will love it once they try it.”

When asked about his favorite dish, Kamal doesn’t miss a beat. “Our tacos, chicken and steak, are very good. The meat is very tender. We do two or three tacos in a plate. That makes us a good Taco Daddy.” He laughs, “If I say enchiladas or fajitas, that might make me the Fajita Daddy.”

The menu hits all the popular highlights: quesadillas, chimichangas, burritos, nachos and even burgers. It also touts their Al Mojo de Ajo (garlic shrimp in butter and white wine for $18) as a “Daddy’s favorite.” There are soups, including black bean and chicken tortilla, and salads. Among reviewers, Taco Daddy’s southwest eggroll appetizer with chipotle ranch ($7.50) gets consistently high marks, as does the cinnamon-y churros dessert, served in a neat stack of four with vanilla ice cream and caramel sauce ($7). The children’s menu is a nod to Kamal’s 2 ½-year-old daughter, Mehi, who is a fan of tacos and chicken tenders. She also gets credit for inspiring the restaurant’s cheeky name. Proud papa Kamal jokes, “We thought about naming the place Nacho Mama, but it was taken.”

Portuguez, a native of Mexico, channels lessons learned cooking with his mother and grandmother as a foundation of Taco Daddy’s kitchen. He insists that freshness is key, even for drinks. “Everything is made from scratch in our bar. We have our own recipe for margaritas, made with agave nectar and fresh-squeezed [citrus] juice.” On busy weekends the staff juices masses of lemons and limes three times a day.

Back in June the bar added a signature Sandiarita, with fresh fruit—“sandia” is watermelon—tequila, agave nectar and a squeeze of lime. Drink specials rotate, including piña coladas and mojitos or other margarita varieties. There’s strawberry, mango and pomegranate, plus a jalapeño-spiked “Oohlarita” and a frisky Irish whiskey version with green apple, too. True tequila aficionados can upgrade the star ingredient or savor it straight. Choices are distinctly categorized as “blanco” or “plata” (white/silver, meaning clear and typically unaged), “reposado” (rested, aged in oak barrels) and “anejo” (old, aged more than a year for richness and complexity). The beachy Peachy Wave concoction is vodka with Triple Sec, lemon-lime soda and peach puree that packs a punch. If simple volume is the imperative, a 24-ounce Daddy Classic will set you back just $14.

With nearly six months running Taco Daddy Cantina under their belts, the pair will open a second location in Gaithersburg this month. Kamal, a veteran restaurant owner, has big plans. He says they considered opening two restaurants in Frederick concurrently, but it was too much on their plates. “I want to do a fine dining Indian restaurant with a martini lounge or Jamaican restaurant, like Bahama Mamas, with a rum bar.”

He’s keen on Frederick for future projects. “Frederick is the most beautiful downtown up from D.C. It’s grown up tremendously. The best thing is, the people are so good. They are food lovers and they love small restaurants.” He says he was particularly impressed with the city and county’s support for the endeavor and delighted by the notable absence of chain restaurants Downtown. “I’m very grateful. … We are a small, family owned business, which is hard to maintain. There are so many things [to juggle]. … I hope I can stay and keep feeding people good tacos for the next 20 years, at least. We just want people to come and enjoy.”