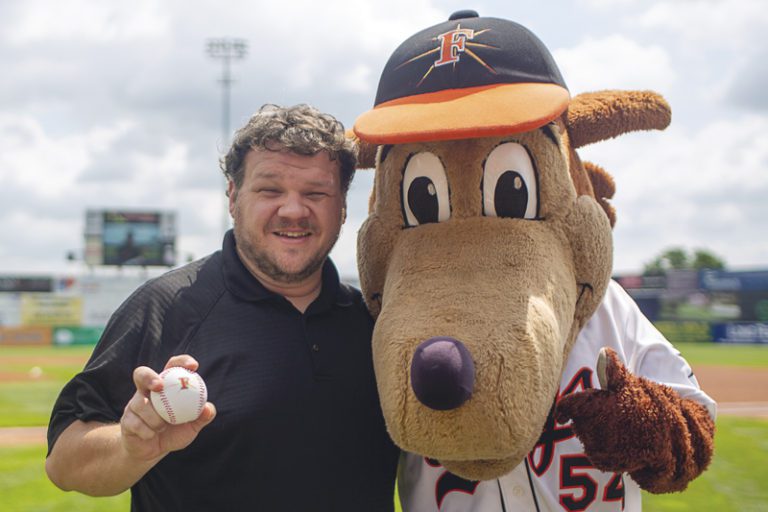 The Mission to Avoid Embarrassment By Throwing a Forgettable First Pitch

I am standing just in front of the pitcher’s mound at Harry Grove Stadium at about 11:50 a.m. on a spring Sunday. It’s the first nice day after a week of rain and it appears everyone in attendance (myself included) is just happy to see the sun again. Nonetheless, they are still paying attention to me when the PA announcer says, “And throwing out our next first pitch, Tripp Laino!”

The Class-A Frederick Keys are celebrating their 30th anniversary this year, and they have a bunch of celebrity guests throwing out first pitches—Corbin Bernsen of L.A. Law and Major League fame, Doug E. Doug from Cool Runnings and former professional wrestler Kevin Nash (aka Diesel), just to name a few.

I am obviously not a celebrity, but the Keys were gracious enough to let me take an attempt at the hallowed first pitch duties, something I’d always wanted to do.

For the sake of full disclosure, I was never very good at baseball—my most vivid memory of youth ball is sobbing in a port-a-potty after being called out when I had clearly beaten the throw to first. (It is important to note that I was not then, nor am I now, what someone might describe as “fleet of foot.”) This being my only distinct youth baseball memory, despite playing tee-ball through at least age 10 leads me to believe that my assessment of my skills is accurate.

In fact, before getting the approval for this first pitch, I hadn’t thrown a baseball in close to a decade. Some might call this foolish. I prefer “bold.”

Now, I figured there were two strategies going into this: comedy, or a serious attempt at throwing a strike. I fell down a YouTube rabbit hole in the days leading up to this attempt, watching videos like “MLB WORST FIRST PITCHES EVER” and “10 Worst Celebrity MLB First Pitches!” and seeing celebrities like 50 Cent and former MLB ace Nolan Ryan throw first pitches that didn’t even make it near home plate. Despite my utter lack of recent training, I somehow felt pretty certain I was going to be able to avoid that kind of catastrophe.

Still, there’s a world where it’s fun to be the guy who throws the abysmal first pitch—sailing one into the netting or tossing the ball almost straight up into the sky, for instance. Or even being really silly and asking to switch with the catcher and catch it instead of throwing it.

But after discussing these options with family and friends, I became convinced I needed to make a serious attempt if I was going to get the most out of this. So I changed tactics and looked for the best of the best, to steal some tips.

When you watch videos like “MLB Best First Pitches,” it becomes quickly clear that to be remembered, you’ve got to really blow people away. Like, for instance, be Chewbacca. Or Darth Vader. Or Olympian Simone Biles, who did an incredible flip before delivering a strike.

Since I’ve never driven the Millennium Falcon, used The Force or even attempted a flip, I decided to go for the simple, achievable “not making the catcher get out of his crouch to snag the ball,” and “forgettable.” But with my decade-long layoff from throwing a baseball, even that was not certain.

To remedy my lack of throwing experience, I decided to toss some practice pitches in my backyard. I dragged an old lawn chair against my neighbor’s fence, paced off 60 feet and fired my first attempt. And you know what? Bam! A perfect strike! Maybe this wasn’t such a foolish idea? What if I’d been sleeping on some unknown arm speed, a la the movie Rookie of the Year? Maybe this would go SO well I’d be swapping my journalist’s pen for an orange-and-black Keys jersey.

Well, a funny thing happened after that perfect first throw.

My next 20 attempts missed the atmosphere around the chair. I couldn’t even get all the pitches to the chair—several bounced in the dirt and rolled to a stop. My last, lamest attempt hit the top of a 7-foot tall fence and bounced straight up, almost landing in my neighbor’s yard. As this would have required me to explain why a grown man was throwing a baseball alone, in the near dark, in his work clothes, I decided to call it a day and not throw any more pitches before the game.

I arrived at the stadium about 30 minutes before I was due to throw out the pitch, which was enough time to meet the incredibly friendly staff who produce the Keys’ in-game video entertainment and would help me actually throw this pitch and receive my souvenir ball. That was also ample time to become really, deeply, ridiculously nervous about fouling up this whole thing.

Just before they introduced the first pitch, a stream of about 20 schoolchildren came down to the field to sing the national anthem. So in addition to the crowd in the stands, I’d have an army of children who’d be right there for this. Surely, if I messed this up, the kids would be laughing. I would have when I was their age!

I asked the staff for any memorably bad first pitches, hoping to hear of any preposterously bad pitches and lower the bar for my expectations. But other than small children, who can’t physically throw the ball the full distance, they told me that most people do fine.

Finally, it was pitch time. First baseman Collin Woody, in his first year with the Keys, crouched behind the plate, offering a clear target just about 60 feet away. I reared back and tossed the ball, opting for less of a pitching motion and more of a “oh-please-oh-please-just-get-to-the-plate” toss.

The rewarding sound of a ball smacking squarely into a glove followed. Success! Woody moved his glove a bit, but didn’t even have to adjust his balance to pull in the pitch. Victory! I jogged toward him to retrieve the ball, and he was gracious enough to sign it for me, and it will have an honored place on my desk.

It turns out that it’s not actually that difficult to just get the ball over the plate—so if your number gets called, relax. It’s pretty easy to throw a forgettable first pitch. And if you want to be remembered? Well, get fitted for a Chewbacca suit.