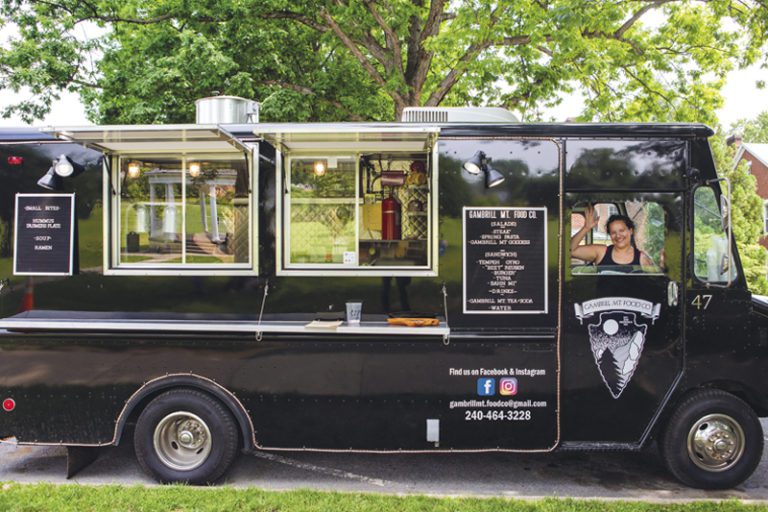 Chasing after the ice cream truck is a childhood rite. Even as adults, the dulcet tones of Pop Goes the Weasel on a summer afternoon send hearts a-flutter. It means treats are on the horizon. Maybe that’s why so many of us thrill to see a food truck rolling along. We expect there’s something good inside. Usually, there is.

Now, we’re not talking about hot dog carts of dubious origin that dot the corners of big, touristy cities like New York or D.C. The newest wave of mobile food vendors are full-on, Food Network-channeling cuisine masters that happen to have a kitchen on wheels. With little space and a lot of gumption, local purveyors serve everything from succulent lobster to dry-aged beef from where the rubber meets the road.

The modern food truck phenomenon can be traced to 2008 Los Angeles and the success of Kogi Korean BBQ, according to U.S. Chamber of Commerce’s 2018 report, Food Truck Nation. Kogi’s magic pairing of tasty food and savvy digital marketing helped the truck clear more than $2 million in sales that year. With start-up costs running as low as $50,000, it was proof of concept for mavericks with a desire for independence and a knack for unique eats.

Chef Niko Negas runs the kitchen at the (really) brick-and-mortar Roasthouse Pub on Urbana Pike and its sister food truck. Negas says the trucks jive with current culture. “People want to try different things … it allows me to expand my choices and creativity.” He serves “elevated street food” from his truck, including a custom, locally sourced beer bratwurst and a brisket-topped, 100-percent beef hotdog. His burgers are dry-aged for two weeks then imaginatively dressed. He may add chipotle aioli, creamy avocado, crispy Funyuns and Cotija cheese on a pretzel-brioche bun. Roasthouse’s truck caters events, but it’s a fixture at Flying Dog Brewery most Thursdays through Sundays.

Fellow trucker Eric Kilgore started Say Cheese in June 2016 and added his second truck in December 2017. He chose grilled cheese because, he says, “Americans remember it from childhood … and it can taste like anything, pizza, barbecue, buffalo chicken … whatever you’re in the mood for.” His signature dish piles lobster claw chunks between buttery ciabatta slices with melted cheddar and muenster, bacon, and morsels of mac-n-cheese. His “Blueberry Bliss” sandwich marries fresh berries with tangy goat cheese, creamy Havarti, spinach, honey and a balsamic glaze.

Although Kilgore’s base of operations is Montgomery County, a new state law in 2017 streamlined the health inspection process for food trucks operating across county borders, so he’s active in Frederick County, too. Fans can find Say Cheese regularly at breweries, such as Smoketown Brewing Station in Brunswick and Attaboy Beer in Frederick, as well as the new Key City Food & Farm Market at Baker Park. Say Cheese will be at Linganore Winecellar’s Summer Reggae Wine Festival on July 21-22. Kilgore would like to add a third truck or restaurant. “My goal is to have 200 trucks, because nobody’s ever done that. I’d like to see Say Cheese everywhere.”

The Chamber report notes “regulatory complexity poses the greatest burden to food trucks,” especially as civic leaders try to bridge the interests of mobile food vendors versus traditional restaurants, while preserving an area’s cultural integrity. A decade ago, food trucks were business non-grata in many areas, including Frederick City. Now, a foodie destination with bustling downtown restaurants and brimming parking decks, food trucks are seeing a renaissance, too. Negas, a long-time area resident, says there’s a niche to fill. “In the past year to year and a half, [governments] are trying to be more accommodating with food trucks.”

Patrick Maggi, owner of the 26-foot Blues BBQ truck, concurs. He started selling crabs in 2003 but converted to barbecue in 2004, going strong since. Blue’s base location recently changed. As of this writing, diners can find Blues BBQ on the Southern States property at 5841 Buckeystown Pike, Tuesday through Saturday. Maggi says permitting is easier, but trucks must still meet the same stringent health department standards as other food service businesses, as well as transportation and fire code regulations.

Vehicle maintenance is a big issue. “I just put new tires on my truck for $4,000.” That equates to a lot of smoked brisket, Maggi’s best seller, but he wouldn’t have it any other way. “I’ve had nine restaurants over the years … the most profitable was my barbecue truck.” On a busy Friday, Maggi may feed 300 people a mountain of tangy Carolina barbecue with slaw, collard greens and sweet scallion hushpuppies.

Kilgore says breweries and food trucks naturally go together. Breweries, wineries and distilleries are hot tourism destinations, but usually don’t serve food. Mobile vendors can’t sell alcohol. It’s a complementary relationship that extends to social media. Fans of each can follow their favorites online, with real-time updates about cross promotions, locations and daily offerings. “It’s two businesses working together for the greater cause of the people,” says Kilgore.

Farmers markets are in on the action, too. Adrienne Summers manages the new Jefferson Farmers Market at the Ruritan Center every Wednesday. “We do a Facebook Live broadcast at 4 o’clock so people know what products and vendors we have that day,” she says. Renzi Pizza is the food anchor. Jefferson resident Steve Renzi uses Facebook and Instagram to keep customers in the loop. He does wood-fired specialty pizza, often using fellow vendors’ items. He’s done Maryland crab pizza, taco, Philly cheese steak and a loaded mashed potato version. He’ll average 50 to 75 pies per event.

Summers says, “People can pick up dinner on the way home,” then grab dessert, ingredients for the next meal and flowers for the table in one stop. The covered market runs, rain or shine, through Sept. 12.

Food Trucks feature prominently at Baker Park’s new Key City Food & Farm Market on Fridays, 10 a.m. to 2 p.m. Sean Poulin, recreation supervisor for the city, spearheads the series. “We have six to seven food trucks that will rotate throughout the season.” They join craft vendors, native plant sellers and other local food producers/farmers. Poulin says community response is strong. “The food trucks have done great. … We might be able to grow this even bigger.” Participation at the market is one of the few ways that a food truck can operate in Downtown Frederick. A city ordinance restricts where they can set up, limiting them to private property with written permission by the site’s owner. Daily permits are available for festivals and other special events. The Key City Food & Farm Market runs through October.