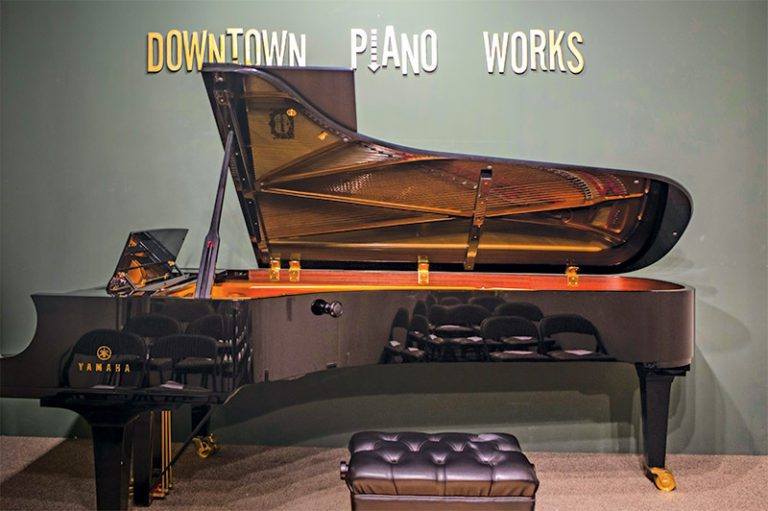 Before the famous friends of Dan and Theresa Shykind thread their way along the sidewalks in Downtown Frederick, they might have stopped in London, or Moscow, or Montreal or Tokyo. These visitors to Downtown Piano Works on the corner of Market and All Saints streets have traveled the world, capturing prizes in international classical piano competitions or performing in duets or trios with world-famous artists.

Yet they all jump at the chance to play a bit of Dvořák, Bach and Beethoven in a tiny, little-known concert hall tucked in the rear of the Frederick store. This spring, the store marked 150 performances that have drawn music critics, politicians and serious classical music fans.

“People have told me how amazed they are to hear a concert here, and then see that it was played somewhere famous and reviewed in The New York Times the next day,” says Dan Shykind, co-owner of the store with an eclectic resume—physics major, corporate sales guru and now passionate purveyor of Yamaha pianos.

About 12 times a year for the past 10 years local residents and visitors from throughout the region have been given a free evening of world-class music at the Shykind’s store. Dan and Theresa, herself a musician for the past 40 years, came up with the idea soon after they opened the shop in 2008. The year turned out to be a fortuitous one to open due to the recession; they were about to negotiate a favorable lease that they believe have helped them succeed. A few years before, Theresa had viewed the still-developing Carroll Creek Linear Park area while having lunch Downtown with her mother. “I told my mother, ‘I’m going to own a piano store here one day,’” she recalls.

And sure enough, on a trip home from a meeting in Boston for Dan’s corporate sales and marketing job, they made plans to capitalize on her experience playing and teaching and passion for pianos. Ninety days later, in time for that year’s In the Street festival, they opened the store.

Theresa says Dan has never been able to sit still, and he soon carved out a spot in the space, and in their business plan, for small, salon-like concerts in the shop, which boasted ceilings that provided ideal acoustics. “We saw it as an opportunity for both the audience and the artists to have a close-up experience that was unlike the Kennedy Center or Strathmore,” Dan says. “And actually, a lot of the music they are playing was written for small, salon suites centuries ago that were very similar to the close-up setting here.”

Now, the shop is completely booked as the word of the concert experience has gotten around—a chance to play at the concert space even became a prize for the winner of the Wideman International Piano Competition.

As for the audience, getting a “ticket” to the show isn’t easy, either. The concert hall only holds 65, at a maximum, and Dan and Theresa notify only small groups at a time from the 1,000-person concert list. They are emailed and must respond within hours to claim a seat. If they don’t respond, the next group gets a chance. And you don’t show up after claiming a seat, beware. You are moved to the bottom of the list and eventually dropped. “We are in the awkward position of turning people down,” Dan says.

One recent concert was given by Amit Peled, a world-renowned cellist who uses the actual cello of the late Pablo Casals, arguably the greatest cellist of all time. (It was given to Peled by Casals’ wife, Marta, who believed Peled’s playing most embodied her late husband’s style.)

While rain and hail pounded outside on the walls of the store’s 19th-century building, and would eventually flood parts of Downtown Frederick, 40 people listened to music and intimate stories from the cellist. Peled has played at Downtown Piano works 30 times during the past 10 years in duos and in the Tempest Trio. The remainder of the year, he plays around the world when he is not teaching at the Peabody Institute in Baltimore.

“My job is to try to catch the color of the keys,” he told the audience after his first Bach piece, Concert Suite 1 for Cello in G Major. After more questions from the audience, he demonstrated how the piece’s prelude—which, he explained, is a composer’s need to “set the audience in the right mood for the dances” that entertained 16th-century European royalty—in G is a happy key, in contrast to D minor, a “sad key,” and C minor, an “angry key.” “My job is to transfer the emotion of the music,” he explains.

One local resident, Kate Carter, has come to many of the concerts after being tipped off to them by a business client. “I’m not a classical aficionado, but I’ve come to appreciate classical music more because the performers that come here to explain it to us,” she says.

Aidan Herrera, a young Centerville Elementary School student in his first year of piano lessons at Downtown Piano Works, sat in the front row with his mom, entranced by the experience. Could he see himself in that space one day? “Maybe,” he says.

Not everyone can invite international performers to a small concert hall in Downtown Frederick, Md., and get a yes. But Theresa and Dan are humble about their connections to the masters. “Classical piano is a small world and, over time, we all get to know each other,” says Theresa with a smile. Theresa teaches at the business, as well.

Classical performers have rigorous concert schedules that take them away from home and family much of the year, she says. “They love coming here, because they stay with us and we have a great time cooking for them,” and entertaining them at their home in Mountain Laurel Estates, a wooded neighborhood north of Frederick. The Shykinds’ young daughter, Zoe, has grown up sitting at the kitchen table with famous performers. “It’s fun to talk to them at home,” and then hear them on the radio or see a performance on TV, she says.

“I love playing here. They are my friends and this is such a special place,” Peled says after his concert. “It’s like playing at home.” Peled, who is known for his audience dialogue, says his evenings at Downtown Piano Works give him confidence to speak when he is onstage at Carnegie Hall and other large venues. “I wouldn’t dare to do that on a big concert stage if I hadn’t practiced here first,” he says.

The Shykinds have never charged for the concerts. In fact, they have paid several times to have the performances broadcast on WETA in Washington, D.C., to bring the intimacy to a larger audience. “It’s important to support our local arts community, and to have performers visiting of that caliber,” Theresa says.

Dan, though, is quick to point out the practical side—and the benefits the concerts bring. “It’s a gift, yet we get something out of it,” he says. “How do you put a price on being on WETA or having a music critic writing about your store?”

Kate Carter says she and her friends in Frederick are grateful. “”The more kindness you put into the community, the more you receive back,” she says. “What they do is like a gift that keeps on giving.”