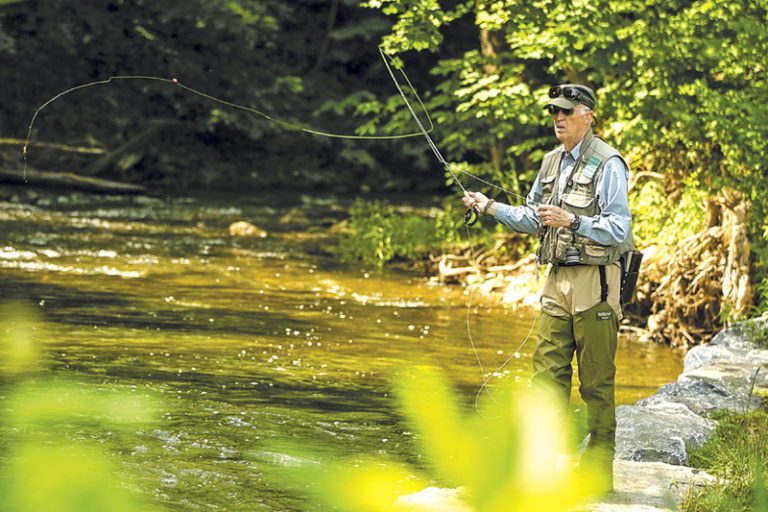 The Peaceful, Patient Pursuit of Fishing in Local Creeks…and the Work to Keep the Hobby Alive

The art of fly fishing takes place on the canvas of creeks in Frederick County each spring through fall. It’s mostly a quiet medium, accented by the relaxing resonance of water streaming over rocks.

But it isn’t easy. Fly fishing requires anglers to test their knowledge of fish habits, feeding patterns, the waterway and other intricacies of aquatic habitat. It requires patience, dexterity and a feel that cannot be explained until someone is actually gripping a rod while standing in knee-deep water.

Even more difficult is keeping the art of fly fishing alive—the goal of a variety of stakeholders, from the anglers themselves to the biologists and wildlife experts who study and stock Frederick County’s rivers, creeks and streams.

“This is our home water,” says club president Larry Forte, president of Potomac Valley Fly Fishers. “We take ownership of this, and try to keep it clean.” The club is in its 51st year of providing an outlet for local residents who want to trade secrets and learn the skills of fly fishing. It promotes fly fishing as a sport, provides advice to its 130 members and promotes good habitat and the best practices of fly fishing, fly tying and fly casting.

Forte is talking as more than a dozen members spend a spring morning cleaning Catoctin Creek where it flows through Catoctin Creek Nature Park. Carrying bags, members pull cans, bottles, tires and other debris from the river and the vegetation-encrusted banks.

The club also raises trout—provided by Maryland’s Department of Natural Resources—to stock local waterways. Without stocking, trout would be hard to find. Brook trout, Maryland’s only native trout, once inhabited creeks and streams throughout northern Maryland, from Cecil to Garrett counties. Today, brook trout have disappeared from most local creeks, although there’s a reduced population surviving in Owens Creek. Rainbow and brown trout are more numerous, helped by the state stocking program and wild brown trout reproduction.

Trout will eat throughout the day and thrive in clean, cool water. That’s why local creeks are stocked each spring and fall. As the water temperature rises above 68 to 70 degrees, trout become sluggish and are less likely to survive. In stocked waters, trout can be caught and kept, called “put-and-take,” in summer. In fall, catch-and-release rules apply.

Bass, however, like deeper water. That’s why they are found in wider rivers like the Monocacy and the Potomac. Bass and carp feed early mornings and evenings, so that’s the best time to fly fish for them, Forte says.

“Fish don’t want to expend a lot of energy to eat,” Forte explains. They want to eat, but they don’t want to open themselves up to predators, which often are hawks and eagles. They’ll seek out a spot behind a rock or logjam and watch the currents for food, he says. “So it’s figuring out where they are and what they’ll eat.”

One of the best fishing sites to fly fish is Fishing Creek, according to John Mullican, field operations manager for the Department of Natural Resources. Other good places to try fly fishing include Big Hunting Creek, Owens Creek, Middle Creek and Catoctin Creek.

Fishing Creek is stocked each spring and fall with rainbow trout. A good access point is at the intersection of Fishing Creek and Mountaindale roads. Fishing Creek’s location in the Frederick City Watershed is helped by its forested cover, which is good for trout. The watershed is increasingly becoming a recreational attraction, offering remote, quiet fishing spots away from populated areas and major roads.

“Frederick County does a great job in watershed management,” Mullican says. “Having a healthy environment is first and foremost to managing fisheries, and then they can be managed to maximum benefits.”

Mullican spent most of his 30 years with the Department of Natural Resources at the Lewistown Fisheries Field Station before being promoted two years ago and moving to the Albert Powell Fish Hatchery near Hagerstown. The hatchery oversees most of the trout production for stocking in Western Maryland, including Frederick County. As a youngster in suburban Washington, D.C., Mullican’s grandfather enticed him into the sport through stories of fly fishing in Frederick’s Catoctin Mountain area.

Middle Creek, upstream from the Md. 17 bridge, is another good spot to fly fish for trout in Frederick County. Owens Creek, in Catoctin Mountain Park, is still home to natural brook and wild brown trout.

Those who don’t know the difference between a rod and a reel might assume that all fishing requires bait. Dig up a few worms, stuff them into a pail, stick one on a hook attached to a line and drop it in the water.

Fly fishing, however, involves learning the feeding habits of the fish, the water current and surrounding habitat. “I enjoy the science of it,” says Lynn Ashe, of Walkersville. “There’s so much to learn.” Ashe has been fishing for 55 years, but just started fly fishing two years ago.

Jocelyn Fryer, 9, of Mount Airy, has been fishing since she was 4, and she prefers fly fishing. “You have to cast the right way,” she says. “You also have to wait a long time.” It can take a bit longer to catch a fish through fly fishing, but is that such a bad thing in this fast-paced world?

Flies are the crux of fly fishing. Instead of bait, fly fishing uses flies to lure the fish. Most fly fishing enthusiasts use barbless hooks, because fly fishing is often catch and release. Flies resemble what the fish feed on. For local trout, that’s usually stone flies, caddis flies and mayflies. In summer, they also eat ants and beetles. So when you use flies, you want them to look like these insects in the nymph, larval and adult stage.

“Flies that float on the surface are called dry ties,” says Mullican, displaying a case of homemade flies. Nymphs, however, float a few inches below the surface. Making a fly is called tying, because the materials are held together with sturdy thread. The body is made with dubbing, and tiny wings may be made with fur from deer or other wildlife, or from bird feathers. Then, add anything your imagination suggests. “Fly tyers are always looking for material,” Mullican says. “All fly fishermen are looking to create the most effective fly.”

Potomac Valley Fly Fishers offers two fly-tying classes a month, and those are suggested for beginners. Flies can get expensive, and fly tying is an art in itself. One of Mullican’s flies has a peacock fiber, which features the green, iridescent color of Japanese beetles. “There are thousands of different patterns,” he says. “There’s no one way to do it.”

Parking areas along Md. 77 allow easy access to fishing spots along Big Hunting Creek. One is near the memorial to Joe Brooks, a Maryland pioneer of modern fly fishing and mentor to the late Lefty Kreh, Frederick’s world-renowned contribution to fly fishing in the latter half of the 20th century.

Mullican parks his truck there one morning after a series of heavy rains. The clear, rock-strewn creek beneath a shade-friendly canopy is receding, and the day is sunny and cool. It’s a good time to fish. Mullican carries his flies, rod and colorful fishing line, which has a purpose that goes beyond aesthetics; it’s easier to see in the shade. “Your fly line is the weight that delivers the flies,” he says. “It’s thicker and heavier than spinner line.” The leader line tapers toward the tippet, which holds the fly.

The weight of the leader line depends on the stream conditions. In shallow water, a shorter leader may work. “The line is meant to float on the surface,” Mullican says. “For a lake, you want a heavier line. For a mountain stream, your fly line will float.”

Mullican dons his waders. Waders and boots should be disinfected each time they’re used, he says, to prevent the spread of invasive insects and aquatic creatures, which have already taken up residence in many local waterways.

Once in the water, he casts his line into the current, always working his way upstream, so as not to disturb fish or other aquatic creatures. “It’s a constant game of adapting to stream conditions,” he says as he positioned the fly and repeatedly cast his line. “A take is subtle,” he says. “All you’ll see is the line tighten up a bit. It’s going to have a slight bow in it.” It wasn’t long before a small, silvery rainbow trout nibbled on his fly. Additional casts resulted in another rainbow, about 10 inches long, and two slightly larger, golden-hued brown trout. He handled each fish gently, taking care not to disturb their protective slime.

In Hunting Creek are wild brown trout developed from hatchery trout that survived to reproduce. Wild brown trout are a bit tougher to catch than stocked rainbows, although most trout become harder to catch after that first bite of an artificial fly.

After an hour or so, Mullican heads back to his office, grateful for any chance to get in the great outdoors during the work day.

About 350,000 trout a year are produced by the Albert Powell Fish Hatchery. Without stocking, there would be a small population of native brook trout left in Frederick County, and some wild brown trout. Stocked trout bring back a bit of what’s lost, and allow people to discover a peaceful way to get outdoors. “Only 6 percent of [Maryland] streams are able to support wild trout,” Mullican says. Stocking changes the equation, and helps anglers contribute to the state’s economy.

But brook trout are a prized fish, and local biologists hope to keep remaining brook trout habitat healthy for those who seek the chance to catch a brookie, as they are known. Brook trout are almost always catch-and-release, to preserve the numbers.

Lindsey Donaldson, a biologist at Catoctin Mountain Park, keeps close tabs on the brook trout there. A recent study looked at the decline of the park’s population of brook trout since 2005. The study looked at changes in air temperature, stream habitat changes and which streams are most and least vulnerable to climate change.

One reason for brook trout decline is human development. “When you think of roads, blacktop holds heat,” Donaldson says. “Also, rain washes into drainage systems and is whooshed away into creeks and streams.” That can cause flooding, and can also heat up the water.

“The sensitive period for brook trout egg development is usually October to April, and sometimes beyond April,” she says. If flooding occurs, that can disturb the trout’s hatching area. “We don’t know for sure, but it makes sense that this causes stress. The more stress, the less chance they can be flexible when it comes to even more change.”

The detailed study may help provide answers going forward, however. “This is the most intensive study of brook trout in the Appalachian Mountains for the National Park Service,” she says.

Potomac Valley Fly Fishers meets the second Tuesday of each month from September to June, 7-9 p.m. at Tuscarora High School. More information about the club is at www.potomacvalleyflyfishers.club.

The Maryland Department of Natural Resources has extensive information about freshwater fishing, costs and rules of fishing licenses and trout stocking schedules on its website. A good place to start is dnr.maryland.gov/fisheries/Pages/hotspots/index.aspx.

To see Nathaniel Hitt, an aquatic ecologist with the U.S. Geological Survey, present the study on brook trout in Catoctin Mountain Park, go to http://bit.ly/2JbLdlu.