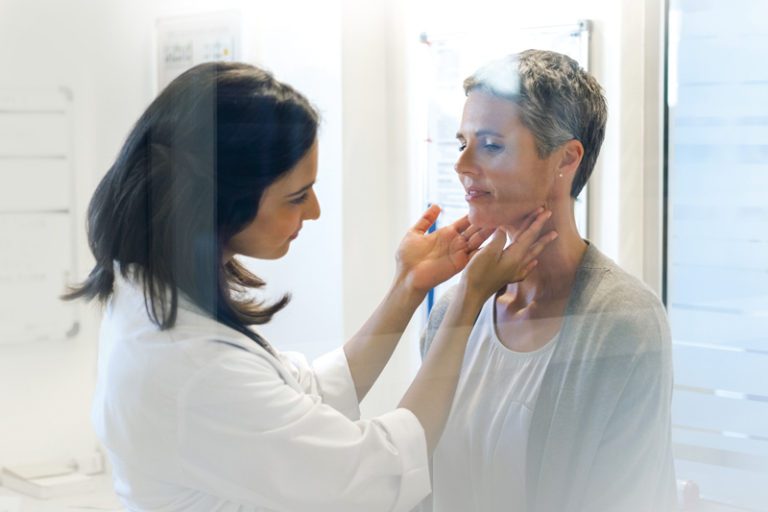 Most Thyroid Conditions are Treatable, but Getting There is the Hard Part

Depression. Weight gain. Dificulty sleeping. All of these are symptoms of one of the most common ailments among women—thyroid disease. The problem is they can also be symptoms of many other things happening in the body.

The thyroid is a small, butterfly-shaped gland at the base of the neck, just above the collarbone. This gland makes the thyroid hormone, which uses the bloodstream to travel to all parts of the body. The thyroid helps the body use energy, stay warm and keep the brain, heart, muscles and other organs working in a healthy way. The thyroid hormone controls how quickly you burn calories and how often your heart beats.

Men can suffer thyroid problems, but women are much more likely than men to develop thyroid disease. Women are particularly vulnerable to thyroid disease after pregnancy and after menopause. Thyroid disease is rarely life-threatening, but it can complicate life and make its victims feel miserable.

Hakim treats many thyroid patients in her Frederick office. It’s a complicated diagnosis, but treatment often brings the kind of normal life that many patients have missed for years.

Julie Gentel, 53, of Brunswick, has been a patient of Hakim’s for more than a decade. “I absolutely love her,” Gentel says. She was diagnosed with Hashimoto’s about 25 years ago. Back then, as a young working mom, she at first dismissed her symptoms as the result of a stressful lifestyle.

Gentel had developed a goiter, or a growth on her thyroid, at about age 12, but it didn’t cause any physical problems. Pregnancy changed that, however. Still, Gentel thought it was her busy life that made her feel tired. A nurse practitioner suggested she have her goiter tested. It was benign, but tests showed she had a low level of TSH, or thyroid stimulating hormone. TSH is a serum that shows up in a blood test. Sometimes it can test normal, even if a patient is not feeling well, so Hakim also considers other symptoms when diagnosing thyroid disease.

Gentel says Hakim helps her stay on top of her disease. “She helps me manage my problem,” Gentel says. She takes Tirosint, a synthetic hormone which helps her body produce enough thyroid hormone. Other patients take Synthroid, a similar man-made thyroid hormone.

Gentel doesn’t depend only on Tirosint to keep her body functioning normally. She eats nutritionally, makes sure she gets probiotics and vitamins in her diet and through supplements, and works out at a gym.

“She saved me,” Gentel says of Hakim. “I have felt really horrible. It can just drag you down.” Hakim prescribes a balanced approach to the disease, including good nutrition and exercise, to keep the body’s immune system in balance. “She promotes overall health. She looks at you as a whole person. It all plays a part.”

Gentel tells everyone she knows, including her adult daughters, to pay attention to their bodies. Through her work as a dental hygienist, she sees a lot of necks. She lets patients know if she spots what could be an enlarged thyroid. “It gives me a good platform to promote good health,” she says. “… Pay attention to your body, that’s what I tell everyone.”

Hashimoto’s thyroiditis is named for the Japanese doctor who discovered the disease. The condition first presents itself as a goiter, caused by slow and chronic cell damage to the thyroid.  Over time, the thyroid will start to fail. Tests will show if the body is producing thyroid hormones normally. The tests aren’t always accurate, however, which is frustrating for patients and doctors.

“If the numbers still look normal, other things support a diagnosis,” Hakim says. Many doctors will dismiss symptoms if the numbers are normal, she says, but patients may continue to have symptoms. Those symptoms include fatigue, weight gain, constipation, increased sensitivity to cold, dry skin, depression, muscle aches, reduced exercise tolerance and irregular or heavy menstrual periods.

Hashimoto’s thyroiditis is an autoimmune disorder, in which antibodies directed against the thyroid gland lead to chronic inflammation. This causes the thyroid to gradually stop working well, and produces the underactive thyroid, or hypothyroidism. Hashimoto’s is most common in middle-aged women, but can happen at any age, and can also affect men and children.

Graves’ and Other Conditions

Graves’ disease is caused by an overactive thyroid. This speeds up the body’s metabolism and heart rate. It’s another example of the body’s immune system attacking itself.

Weight loss, increased appetite, feeling irritable, trouble sleeping, increased sweating, diarrhea and lighter-than-normal periods are some of the symptoms. Hyperthyroidism raises the risk for osteoporosis, which can cause bones to weaken and break easily. This is often the first symptom for women who have gone through menopause.

Grave’s disease is less common than Hashimoto’s, but it is important to get treatment. Treatments include beta blockers, which will slow the heart rate until other treatments take effect, antithyroid medicines that block the thyroid from making new hormones, and removing the thyroid, which would bring about hypothyroidism.

“Hyperthyroidism is less common, but can be more serious,” Hakim says. “It can lead to heart problems.”

Thyroid disease can be a silent cause of infertility. It can also be passed down through families. But not having a family member with thyroid disease doesn’t guarantee someone won’t have the ailment. “Dietary changes, other changes that are often passed through families, environmental changes, viruses, can all be causes,” Hakim says.

“Not everyone is the same,” Hakim says. “Not everyone knows what their [thyroid enzyme] level is and where they feel the best. If you just look at the numbers, you don’t get the whole picture.”

Other thyroid conditions, including thyroid cancers, are also very treatable. Most thyroid conditions do not result in death if treated and even thyroid cancer has a low mortality rate. But the chronic conditions caused by thyroid abnormalities make it one of the most frustrating conditions from which to suffer. As a result, many patients look to alternative treatments to supplement traditional medicine.

Dr. Craig Hauser a physician in Braddock Heights who incorporates holistic treatments into his practice, says he takes many factors into consideration when treating his thyroid patients—most of whom complain about exhaustion. “Nutrition, exercise levels, gut health, sleep habits,” he says. “There is never one solution that’s going to fix it all.”

One of the reasons he became interested in holistic treatments was because his wife suffers Hashimoto’s, along with several of her family members. Thyroid patients make up a large percentage of his patients.

He prescribes a Food and Drug Administration-approved natural desiccated thyroid medicine, or NDT, rather than a synthetic thyroid treatment. He also checks patients for iron deficiencies. Many thyroid patients are anemic and suffer from adrenal fatigue, which is said to occur when adrenal glands become stressed. “A lot of my patients respond better to NDT,” he says.

Hauser gathers an extensive health history of his patients, and he prescribes what he calls the five pillars of health. Those are nutraceuticals (supplements with medicinal benefits), exercise, sleep, stress reduction and education.

Heather Bartlett of Frederick is one of Hauser’s patients. She developed Hashimoto’s after her first child was born 16 years ago. She felt cold all the time, and tired. She began taking NDT a year ago, and feels good. “I don’t need a nap, I’m not freezing, I no longer have panic attacks or anxiety,” she says. She has enough energy to keep up with her five kids.

Alexis Borowski, 33, drives from her home in Silver Spring to Braddock Heights to see Hauser. She was found to have Hashimoto’s. About eight years ago, she gained 40 pounds in 12 months, and was feeling exhausted and swollen. She tried Synthroid, a synthetic thyroid, but it made her feel ill. Despite the medication, she developed rheumatoid arthritis and psoriasis, which can be caused by thyroid disease.

She found Hauser, and started on NDT, and found relief. “Within two weeks, my pain in my muscles and bones started to subside,” she says. She lost 50 pounds, and gained a lot of energy. She takes supplements and herbs to treat her digestive system, and is in excellent health. She’s now in grad school studying acupuncture, and she credits her experience with holistic health for pointing her toward her new career path.