A Seat on the Bus 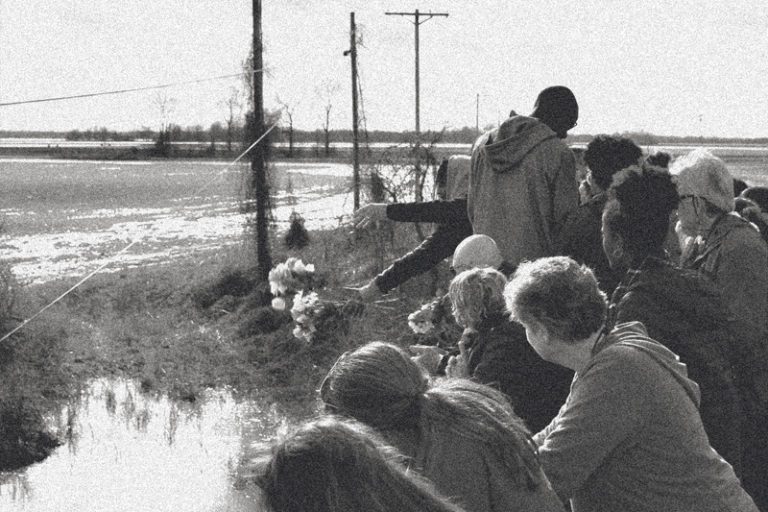 In the summer of 1955, Emmett Till, a 14-year-old African-American boy, was murdered near Money, Miss. His body was found floating in the Tallahatchie River. In the fall of 2017, three Hood College students and their professor stood on the same river bank and shivered.

In class back in Frederick, they had discussed the murder of Till, a Chicago teen who was visiting relatives in the South when he allegedly whistled at a white woman in a grocery store. The details of his actual encounter with the woman in the store have been questioned over the years. He was kidnapped and killed by the woman’s husband and another relative. They were acquitted by a jury. The pair later confessed to the crime but was never convicted.

But books can never tell the whole story.

Walking along the river, the students had a heightened sense of how the brutality of the act and the injustice of the court system galvanized the Civil Rights Movement. “It was essential to stand in the spot to understand. To meet the townspeople. Time was eclipsed. It was sad,” recalls Terry Scott, assistant professor of history at Hood. “We had to take some time to talk and process.”

And that was just one stop.

Scott and the Hood students—Natalie Yeagley, Raymond Clay and Adaire Crabbe—were part of a group of 48 that participated in the interracial, intergenerational learning experience featuring walking tours, conversations and lectures and organized by Project Pilgrimage, a Seattle-based nonprofit organization.

Eventually, the group’s 10-day journey through the heart of the Deep South took them to towns and cities that sound like signposts in the civil rights movement—names like Birmingham, Montgomery, Selma and Oxford. The students visited civil rights landmarks like the Edmund Pettus Bridge, site of the 1965 march that came to be known as “Bloody Sunday.” They went to homes, museums and universities. They also toured organizations like the Equal Justice Initiative. All along the way they spoke to educators, tour guides and people who were on the front lines of the civil rights struggles during the 1950s and 1960s, as well as leaders of today’s movements.

Visiting sites of struggle and accomplishment allowed students to fully examine the sheer courage required of civil rights workers, says Scott, who served as history guide for the trip. “Unique lessons are learned by visiting and experiencing spaces of unthinkable contestation over power and privilege, where terrible injustice was countered by overt displays of courage,” she says. “The lessons of perseverance are priceless.”

Getting a seat on the bus was not easy. The students had to apply for the Project Pilgrimage program and attend workshops in Seattle. Traditional-age college students and people from other age groups and walks of life can apply for the program.

Applicants are chosen based on their desire to study the arc of the African-American freedom struggle, commitment to social justice, belief in the value of cross-racial relationship building, and diversity (including race, age, gender and economic standing).

Natalie Yeagley’s interest in archeology and history led her to apply for the trip. She wanted the personal experience of visiting sites to support her classroom education. Although she grew up south of the Mason-Dixon Line in Laurel, prior to the trip she had not seen much of the Deep South. The trip was attractive to her because one of its main goals is to provide an opportunity to learn from the foot soldiers—the ordinary people who took extraordinary action to change systems of inequality.

She points to Theresa Burroughs as a prime example. Burroughs is the founder of the Safe House Black History Museum in Greensboro, Ala. King rested here following a speaking engagement in March 1968, just two weeks before he would be assassinated. The Ku Klux Klan had heard that King was there and came out in force, wearing hoods and wielding shotguns. The African-American citizens of Greensboro came out, too, surrounding the house and grounds, and creating a barrier between King and the Klan.

“People whose names don’t appear in books. All that happened to them. The least I can do is encourage them to talk. And, I can acknowledge and process,” says Yeagley. Among the lessons that she learned were that racism is taught and progress is incremental. “I came out with a lot of frustration—and endless respect,” she says.

Raymond Clay says he went on the trip to learn about history, the sites and the people. Growing up in Georgia, he had heard many stories about the everyday struggles of African-Americans from his grandparents, but he also sensed there was much left out of his formal and informal education. “How our history is taught to us is very selective,” he says. “I went [on the trip] to further learn about the forgotten. There’s a lot of forgotten history in the South.”

Clay was particularly struck by the group’s visit to the Equal Justice Initiative’s headquarters in Montgomery, Ala. The organization was founded by attorney and author Bryan Stevenson and is committed to ending mass incarceration and excessive punishment. During the tour of the headquarters, the group met Anthony Ray Hinton, a man who was exonerated and freed from prison after spending 30 years on Alabama’s death row for two murders he did not commit. Stevenson was able to provide ballistic evidence that the gun that prosecutors had tied to the killings—a weapon taken from Hinton’s mother’s house—was not the murder weapon.

Hinton’s quest for justice inspired Clay. After speaking to him and learning more about the work the Equal Justice Initiative conducts on behalf of advancing human rights, Clay says he is now considering going to law school. “It is an example of what one person can do,” he says.

Lessons, Past and Present

Standing on the very soil where people were lynched overwhelmed Adaire Crabbe with emotion. “Tears came down like waterworks,” she says.

The recent Hood graduate says she believes the trip helped her understand the full impact that great numbers of ordinary people had on the progress of a social justice movement. She says that interacting with the foot soldiers and seeing the historically significant sites were eye-opening. But talking to classmates and colleagues upon her return helped her understand that people are at different levels of understanding the lessons of history. “Some of us are ‘woke’ and some of us are behind the times,” she says. “It helped me understand what’s happening now.”

Crabbe says that while she is acutely aware that racism and hate still exist, the trip helped her recognize the potential for people to grow and change. She pointed to Malcolm X as an example, saying she was heartened by the shift that he made in his thinking about race after he visited Mecca in the latter part of his life. “I love how his story was completely different. He showed himself developing over time. I could see myself in the end part of his life. It’s all about how we should love each other,” she says.

The trip gave the students the opportunity to walk in the footsteps of some of the people who gave their lives for the movement. They also met those still standing up and organizing. They developed a lasting relationship with 79-year-old Bob Zellner, the first white southerner to serve as a field secretary for the Student Nonviolent Coordinating Committee. The students first met him in Alabama during the pilgrimage and then welcomed him to Hood College, where Zellner gave a presentation this spring.

Zellner has a unique perspective on history. His grandfather and father were members of the KKK, but he worked alongside civil rights icons such as King, John Lewis and Rosa Parks. He was arrested 18 times for integrating lunch counters and registering voters. Eight of his colleagues were killed in his first 36 months at the student organization. Although he suffered beatings and imprisonment, he remains active and optimistic. “We went through this 50 years ago and some people are trying to take us back there,” he says. “As long as there’s a breath in our bodies—we won’t let them.”

Zellner’s book The Wrong Side of Murder Creek, A White Southerner in the Freedom Movement chronicles his work and is being made into a movie. He maintains a full schedule of lecturing, traveling and writing with a deep well of physical and emotional stamina. He says he draws energy from the people he meets in current movements such as the Parkland, Fla., students who organized the March for Our Lives.

Recognizing that today’s high school and college students are likely to move into several different career paths in the course of their lives, he urges them to consider making at least one of them a “giving-back career.” “Brotherhood and sisterhood is not so wild a dream as those who oppose it pretend [it is],” he says.

Scott and her students say the trip opened them up to receiving the lessons about the past and the present in new ways. Confronting the details of the nation’s racial history was difficult, even traumatizing at times. But, they say hearing first-hand accounts from Zellner and others shaped their understanding of events and helped to put historical facts into context. “You never know someone’s story until you live it,” says Crabbe.

To find out more about Project Pilgrimage, including how to apply for upcoming trips, go to projectpilgrimage.org.