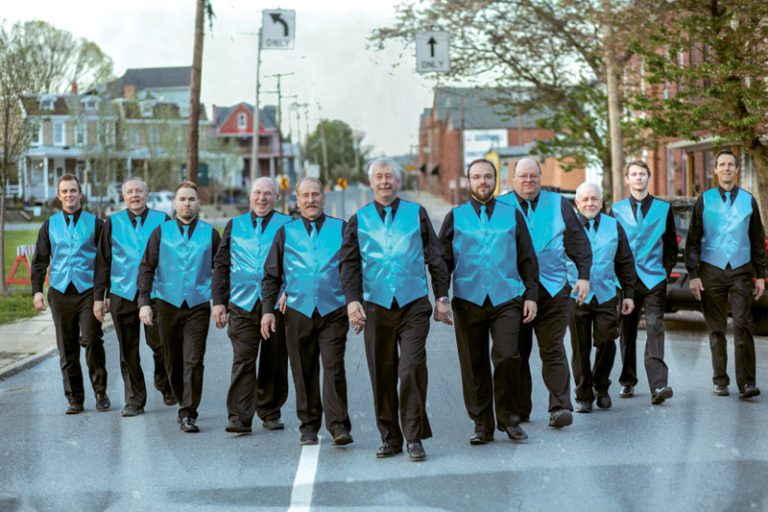 The Catoctones Harmonize Barbershop for Decades

It was a few minutes before a show at Somerford House in Frederick and the Catoctones, Frederick’s own barbershop chorus, was getting ready. Much like athletes limbering their muscles, these musicians tested notes, stretching out their vocal chords and warming up their voices. “Just make sure you’re tanked up for that last note so you can sing it through,” says Phil Rhoderick, conductor and one of the group’s longest-lasting members.

While rehearsing in a small lounge at Somerford, the musicians sing the phrase “Love at home” repeatedly, drawing out the word home. Mouths open-wide, the sounds come from deep within their throats, thrusted forth with oxygen powered by abdominal muscles.

Barbershop singing is a vocal workout. Using only their voices, the group performs melody and harmony aided by hand

gestures and facial expressions that help listeners feel the music. No instruments are needed; their voices are the instruments, layering in the melody with the lyrics to create a continuous sound.

The dozen Catoctones who could make it to the nursing home on this rainy Tuesday night sing songs many of the senior residents recognized, like Chances Are, Paper Moon, When My Baby Smiles at Me and the finger-snapping, toe-tapping Java Jive. They add

in a more recent song, A Wink and a Smile and the upbeat gospel tune When I Lift up My Head.

The Catoctones take their singing seriously. Members must audition. Only serious musicians need apply. Members range in age from 15 to 60-plus. Rowan Gallagher, 15, joined to improve his singing. “I realized after my freshman year that my singing needed work,” the Linganore High School freshman says. “I sing a lot better now.” He hopes to someday work in musical theater.

Greg Brown, owner of an event planning company, once sang in a gospel quartet. He was serving in the Army in Korea back in the mid ’90s when his father sent him a video of a barbershop performance. “I fell in love immediately,” he says. Now 43, he has performed with barbershop groups in Ohio, West Virginia and Texas, and joined the Catoctones when he moved to Frederick.

Rhoderick was a student at Middletown High School and a fan of The Beach Boys and other ’60s harmony groups when he heard barbershop music for the first time. “There was an electricity that went through me,” he recalls.

Rich Heffner joined in 1971 just after he graduated from Gov. Thomas Johnson High School. He heard the group sing at a high school assembly, and spent four months tracking down the group, hoping to join. Since then, he’s been dutifully doing exercises to keep his vocal chords strong.

“Music has a language of its own,” he says. “You’ll hear the expanded sound as we sing.” Vowel sounds are often stretched out and the musicians practice moving their tongues to expand their sound range. “Some swallow a [hard-boiled] egg whole to make the backs of our mouths bigger,” Heffner says. “To make the sounds, you just learn to adjust.”

New members do not need to know how to read music. “We have learning tracks, so you can learn this on the side,” he says.

“We follow the general guidelines of the barbershop community,” says Chuck Boteler. About half the group’s performances are paid appearances and the other half are free. The paid performances help the group cover its costs for training, uniforms and travel. Members are strictly volunteers.

The Catoctones are part of the Barbershop Harmony Society, which has 700 chapters and 22,000 members in North America. Many barbershop chapters are all-male, although there are affiliated women’s organizations, such as Frederick’s Clustered Spires Chorus, part of Sweet Adelines International.

Roger Crist has served as director or assistant director for most of his 38 years as a member. His current title is acting director. Crist is a retired science teacher who was singing in his church choir when he first heard the Catoctones perform in 1977, while a graduate student. In 1980, after completing his studies, he joined the group to perform a benefit for the newly created Weinberg Center for the Arts.

Crist is one of the eight members who kept the group going during the lean years of 2008 to 2013, when it nearly folded. The group emerged with a formal audition process, new standards and has become competitive on the regional level. The group has placed in the top two or three in divisional competitions.

None of the members are professional musicians. Crist played piano for 12 years, and many sang in church or school choirs before joining.

Barbershop a cappella music has a different sound than music accompanied by instruments. “The harmony is different in that the melody is not on top,” Crist says. “In a church choir, the melody is sung with harmonies below. In barbershop, the top voice is barbershop tenor, then lead, then the melody, then bass and baritone.

The barbershop lead voice is similar to that of a tenor in a church or other choir. “A high tenor in barbershop is more on the order of an alto range of a church choir,” Crist says. For many years, Crist could sing that high tenor, but now sings lead or baritone. “I sang tenor for 20 some years, but I had some voice issues, and now can’t sing that for too long,” he says.

Members must be careful to not sing beyond their vocal range and to keep hydrated. They practice often to keep their vocal chords in shape. The Catoctones rehearse every Tuesday evening at the Frederick Church of the Brethren.

Barbershop has its roots in the minstrel groups of the 1920s and ’30s. “Men would gather at the barbershop and sing,” Crist says. “There was no written music. They would tailor the music to their audience.”

These early groups were usually quartets, with one man singing lead and the other three improvising the harmony. Over the years, larger choruses became more common and while many of the songs remain traditional, barbershop music has adapted to include pop songs.

“It needs to have melodies that flow,” Crist says. Even newer songs performed in the barbershop style have a nostalgic quality. Barbershop songs sound familiar, even if you don’t know the song. The performers know the words by heart, and performances emphasize style as well as substance.

The Catoctones showcase their music in regional competitions in the Mid-Atlantic Division of the Barbershop Harmony Society. This year, the group gained a new audience on April 30 when it sang the national anthem for the Washington Nationals.

For more information, go to www.catoctones.org. For more about barbershop music, go to http://www.barbershop.org.