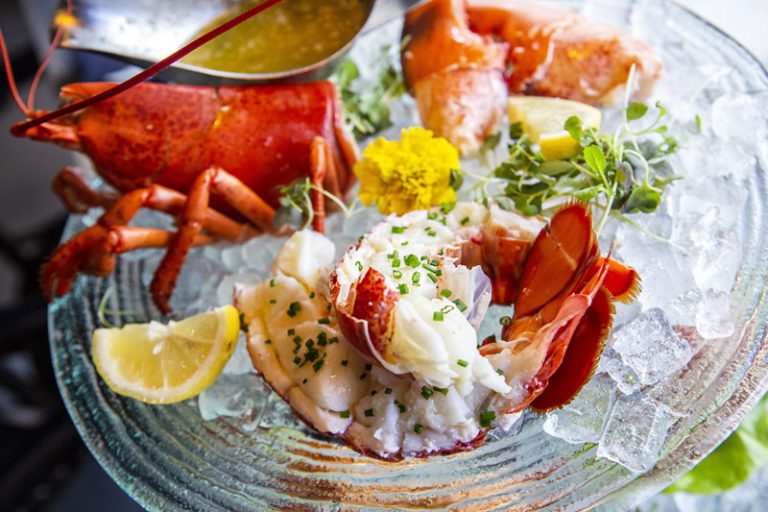 Oysters don’t look like much, some knobby little rock down in the grit. You might think the first person to try one had to be really, really hungry, but there’s something primal about eating a raw oyster. In the right frame of mind, it evokes an elemental passion, a ritual transfer of primordial energy as eaters pluck soft, fortifying flesh from “stone.”

Packed with protein, iron and minerals, this unassuming bivalve fed coastal dwellers throughout the ages. In rough times, a full belly makes all the difference. Then, as now, a meal of raw fish, raw meat, uncivilized by fire, is the act of consumption laid bare. It’s a dare. It’s a thrill. And it’s good, if you like that sort of thing.

Firestone’s Raw Bar is a celebration of seafood in all its purest forms. It’s owner, serial entrepreneur Kimball “Kim” Firestone, introduced his latest gastronomic affair in fall 2016. It is a sliver of temptation between the original Firestone’s Culinary Tavern, an anchor of Frederick’s Downtown restaurant scene since 1999, and the slightly newer (2006) Firestone’s Market on Market. The scant 1,200-square-foot space was carved out of antique brick walls three feet thick that formerly housed the Market, now relocated a notch farther up the block. All three businesses are served by one hopping basement kitchen, led by chef Andrew Mayers.

Of course, oysters hold a place of honor at any raw bar. An ice-filled case greets customers, displaying the daily haul with rough-hewn wooden slabs noting species with names such as “Choptank,” “Blue Point” and “Madhouse,” all East Coast varieties. They come, pending seasonal availability, from as far south as Virginia and north to Prince Edward Island, Canada, where briny bites from Malpeque Bay rule the day. Most diners order by the half-dozen, but oysters are priced individually ($2 to $2.50) with $1 happy hour specials, Tuesday through Friday from 4 to 7 p.m. Potent cocktails, such as the herbaceous cucumber martini, are half-priced during this window, too, so it’s a good excuse to get together with friends and slurp away. The entire space is reservable for private parties and functions.

Chef Mayers likes to work the raw bar because he gets to interact with customers, a rarity for many chefs. He offers oyster-eating advice for newbies. “As scary as it might be for a first-timer, try the oyster without anything.” He says it’s the best way to really taste the oyster. “Whenever I get a new variety that I haven’t tried before, it’s always just the oyster.” Garnishes here, if you please, include horseradish, fresh lemon and cocktail sauce, along with a tart strawberry mignonette. Cultured “Huckleberry” oysters from the southern Chesapeake Bay are a new favorite. “They’re very petite, but they have a deep cup. When you shuck them, they are very plump inside,” says Mayers. “It’s a surprise how much oyster is in that small shell.”

Another chef favorite is the rockfish ceviche. The firm, citrus “cooked” fish is bathed in a yuzu gastrique and plated with a swath of avocado mousse. Crisped sesame pita shards complete the dish. Diners can also opt for exactingly fresh ahi tuna or wagyu beef tartars, finished according to the chef’s evolving inspiration. At the moment, there’s a Spanish-style octopus with green lentils, kale and pistachio or steamed mussels swimming in garlicky curry and white wine. The cured salmon pairs with pickled brussel sprouts, cauliflower purée and Fuji apple. Maryland-style steamed shrimp with Old Bay seasoning is a classic choice.

Most items on the menu are “small plates,” made for sharing, but there are a couple of entrees, salads and sides to round out the selections. If you can’t make up your mind, the Chef’s Tower is an extravaganza of specialties, starting with 18 oysters on the first tier and topped with chilled Maine Lobster tail.

Lest seafood gets all the love, Firestone’s Raw Bar meticulously curates a selection of meats and cheeses, served à la carte or piled in combination onto an arm-long wooden plank. The charcuterie-laden Chef’s Board ($28) is a crowd-pleaser. Once somebody orders one, servers get a rush of subsequent orders, says Chris Tereyla, general manager. “It’s one of our most popular items. Once people see it, everybody wants one.” The showstopper features six savory meats, ranging from prosciutto to spicy sopressata or Toscano sausage with fennel pollen. Guests’ choice cheeses may include Caveman Blue from Rogue Creamery in Oregon or Monocacy Ash from Cherry Glen Farms right here in Maryland. Lacey, thin baguette crisps transport portions of house-made country pâté from slab to mouth. The platter finishes with marinated olives, micro greens, cornichons and pots of fiery Dijon mustard and rich truffle honey. Meats are cut to order with surgical accuracy on a hand-operated Berkel slicer in “heritage” red.

Kathy Wasley is Firestone’s second in command. It’s a close call between that Rolls-Royce of slicers and the hand-made stained-glass skylight, commissioned from a local artist, as her favorite feature, but she doesn’t hesitate on her choice dish: Duck terrine de foie gras. Served cold, a buttery foie gras torchon is packed into savory duck confit and wrapped with prosciutto. She says, “It’s indulgent, but, holy smokes, so good.” Firestone’s Raw Bar is gearing up for its own version of the wine dinner, too, a caviar and oyster pairing for true aficionados.

Diners seem to agree with Wasley. Watching them, they react to each new flavor sensation as if being kissed; closing their eyes and tilting their heads as shoulders sag and a throaty “mmmm” escapes as a sigh. Maybe that’s how such foods earned their designation as aphrodisiacs. It certainly looks like love.