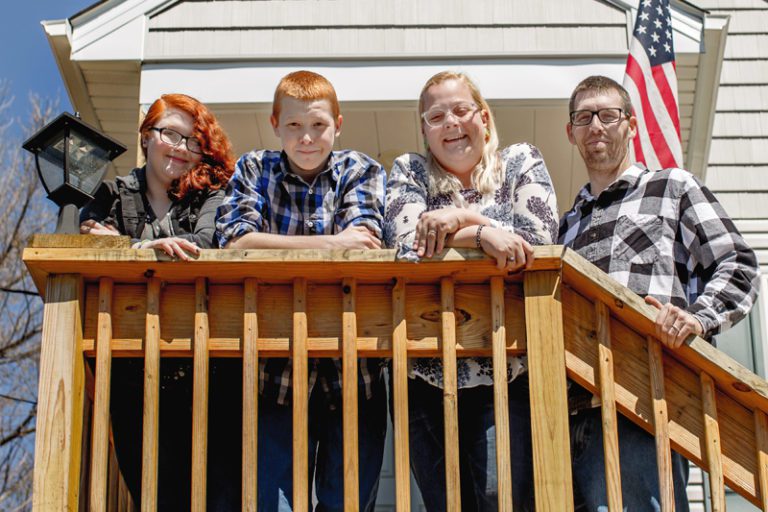 “Habitat gives us an opportunity which is very difficult to find: to reach out and work side by side with those who never have had a decent home—but work with them on a completely equal basis. It’s not a big-shot, little-shot relationship. It’s a sense of equality.”— former President Jimmy Carter

It was pride that almost got in the way of Elizabeth Mulcahy’s blessing.

The single mom of four was renting a log cabin on a farm in Urbana when a friend told her that an affiliate of Habitat for Humanity was opening up in Frederick County and thought she should look into it. “I was tentative about his suggestion,” Mulcahy admits. “I knew about the Habitat organization and always thought it was something I would be involved in, but not on the receiving end. But fortunately, my desire to have a home of my own for my family overrode my pride and I looked into the application process.”

In November 1997, Mulcahy purchased her two-story, single family house in Buckeystown, and became one of the early Habitat homeowners in Frederick. Last November, the school aide had a mortgage burning ceremony celebrating that she had paid off the full mortgage.

Since 1993, Habitat for Humanity of Frederick County has been on a mission of fulfilling dreams, just about one house at a time. For many, it has saved them from despair and hopelessness and reinvigorated their faith in their community. This June, some of the same residents the local chapter has helped will come together to celebrate its 25th anniversary with a breakfast at All Saints Episcopal Church expected to be attended by homeowners, donors and volunteers.

Ron Cramer, executive director of Habitat for Humanity of Frederick County, sees the nonprofit ecumenical Christian-affiliated charity as a quasi-ministry. “This is what God wants us to do while on Earth,” Cramer explains. “Homeownership helps people build wealth, build community and build pride.”

Cramer, a former member of the chapter’s board of directors, took over the organization’s day-to-day responsibilities a decade ago. What he loves most is helping some of the same people in this close-knit community that he grew up with or went to school with, people who have been priced out of the housing market in Frederick and have had to move to Hagerstown, West Virginia or even across the country to find affordable housing. “My heart and soul is here in Frederick County and I want to see it do its best. My heart is with the people who are left behind. For me, this is just one of those things where I can help the community [in which] I grew up. I want to see the people on the lower end of this [income] spectrum enjoy this county as much as the people on the higher end.”

When the affiliate was founded in 1993, the average annual household income of a Habitat homeowner was between $25,000 to $30,000 a year, and the first home built was sold for $51,000. Today, the average income is between $55,000 to $75,000, and a home built this year will sell for $155,000, according to Bethany Miller, development and marketing director for the Frederick Habitat. As the cost of housing has risen, outpacing salaries in some instances, Habitat strives to keep mortgage payments within a reasonable range of around 30 percent of a homeowner’s income.

Cramer says the traditional home-building charity has branched out over the years to include several programs, such as A Brush With Kindness and Aging in Place, neighborhood revitalization programs designed to help qualifying homeowners who can’t afford to make necessary repairs to their homes. These repairs can be the installation of a porch or handrail or a fresh coat of paint, and many of the homeowners helped are senior citizens and veterans.

“People that we help become part of the Habitat family,” Cramer says. “We’re not just doing something and moving on. A lot of times we have ongoing connections with them.”

Habitat of Frederick County also runs the ReStore, where donated merchandise from the community is sold, benefiting the charity.

One of the affiliate’s programs is the Affordable Housing Land Trust, the first of its kind in Maryland, where Habitat for Humanity of Frederick County obtains homes that are rundown or in disrepair at low cost and then makes renovations to resell as affordable housing. Although the home is resold, the Land Trust retains ownership of the land, reducing the purchase price to the homeowner. People who own Land Trust properties can sell their home at a profit, but the price is set by the Land Trust, ensuring the property is always kept as affordable housing.

Cramer sees the Land Trust becoming a model that will continue to grow in the future, as housing costs in Frederick County steadily increase, making it more difficult for many families to find affordable housing. Cramer says developers can put land in the Land Trust, as well as rental property owners or nonprofits that work with rental real estate.

The future will also see the charity moving towards smaller dwellings, like duplexes and townhouses, over single family houses to reduce costs for new homeowners, Cramer says.

“You Have a Fighting Chance”

Habitat homeowners, coupled with volunteers, have built 36 homes since the affiliate was founded. The process requires new homeowners to log a certain amount of volunteer hours to help build their homes, through what is known as sweat equity.

Daphne Weedon, Habitat’s very first homeowner in Frederick, recalls the 350 hours of sweat equity she had to invest in her property.

Weedon applied for a Habitat home in August 1994 and was told in October of that year that her application was approved. From that point until her November 1995 settlement, she got relatives and friends, youth in the community, churches, and businesses to help her fulfill the sweat equity requirement. Her mom, Emma Ambush, made lunches for the workers each Saturday as the house was being built. Her fiancé at the time, now husband, Harry Weedon, dug the mammoth hole for the water hookup.

But it was all worth it in the end. Weedon paid off her mortgage early in February 2015 and says she has no plans of ever leaving her Habitat home located in Downtown Frederick.

“Homeownership helped change my life,” Weedon said. “What it did was bring stability and knowing that my son was going to be raised up in the same address with two parents in the home. You have a fighting chance.” Weedon, a Christian evangelist, now has five children and eight grandchildren.

Cramer underscores the community and family upside to homeownership. “We know homeownership gives homeowners pride and builds community spirit. For the kids, it raises their grade point averages by 1 to 2 grade points and a higher percentage of these kids go to college,” he says.

Mulcahy, 64, has seen it firsthand with her four children, all college graduates. Now she takes great pride in her accomplishments as a homeowner.

“I am so very proud of myself for doing what I thought, years ago, was mission impossible,” Mulcahy says. “I was able to provide my children with a house and with the structure came roots, stability, memories, security, a place to come to for gatherings, a place they were able to call home.”

In 2016, Cyndi Heim and her husband, Michael, purchased their Habitat home in Brunswick. Although they grew up in Baltimore, they later moved to Frederick to lessen her time commuting and to enroll the kids in better schools. They found out about Habitat online and applied for housing immediately, but didn’t hear back right away, Cyndi says.

“I didn’t hear from them and hope was fading for home ownership. It was the last thing on my mind, but three years later, I got a phone call out of the blue. It was Habitat! I was so excited,” she says. “Habitat is a great organization. They like the slogan, ‘We give a hand up not a handout.’ I understand what they mean but there’s always a hand out to help you. They walk you through each step and even help you through the paperwork and red tape.” Mulcahy agreed.

“The Habitat organization is an excellent example of a wraparound operation that provides support at every juncture of the process, from filling out the application to getting the keys to your new home. Along the way, Habitat is cognizant of and vested in providing whatever information and supports a prospective homeowner might need.” Mulcahy says. “These supports are individualized to the needs of the family and demonstrate how Habitat sees each applicant as an individual person with specific needs and wants.”