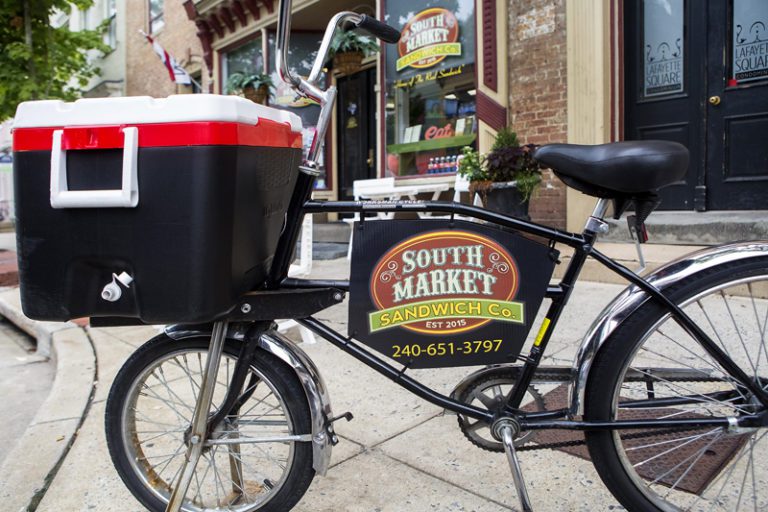 The South Market Sandwich Co., 105 S. Market St., recently changed hands with Greg Seymoure and his wife, Susanne, taking over. Greg certainly knows his way around bread and fillings with stints at Panera Bread and Roy Rogers Restaurants. The couple will continue the company’s trademark bicycle delivery system—currently a fleet of two bikes. They have expanded the catering end of the business as well as adding new sandwich combos to the menu, including a vegan wrap.

“We do all our own sauces, all homemade dressings,” he says, which makes the sandwiches extra good. The top seller is probably the Bubba, he says, a feast of Italian fixings, and “we’ve been told that our Cuban sandwich, the Havana, is better than what is served in Miami.” www.southmarketsandwich.com

Fresh Produce with Your Workout

Starting this month, those who go to the William Talley Recreation Center at 121 N. Bentz St. for a workout (as well as those who don’t) can shop at a farmers market or grab lunch from several food trucks on Fridays through Oct. 26. Key City Food & Farm Market is located near Baker Park’s information booth and also includes vendors selling flowers, wine, meat, eggs and other items. It runs from 10 a.m. to 1 p.m. with the food trucks staying until 2 p.m.

Catherine Effland, Talley Center supervisor, says the trucks will vary among Sweet Farm, Pizza Llama, Gambrill Mountain Food Company, Say Cheese and Knife & a Kitchen. “If it takes off, we might add more,” she says, adding that having food available near the park encourages spur-of-the-moment picnics. “There are lots of places to sit.” Follow the market on Facebook.

The micro-green movement began mainly for garnishing plates in fancy restaurants, but after nutritional studies people discovered that the baby greens, harvested when they are just a few inches tall, “are a super food packed with antioxidants and other healthy nutrients,” says Craig Carlson, a retired Montgomery County police officer who with his wife, Sherill, started Maryland Microgreens in Monrovia last year.

The couple grows a wide variety of the greens indoors, using only pure water and non-GMO seeds. The plants grow on recycled and compostable cocoa fiber mats and are sold as living plants that can be trimmed as needed.

“I like them in soups, salads, wraps and as a garnish,” Carlson says, adding that the greens are from four- to 40-times the nutritional value of their mature counterparts. His customers include restaurants and the Frederick City Market, 331 N. Market St., held Sundays starting this month. He also plans a presence in the Lake Linganore Farmers Market. www.marylandmicrogreens.com

To celebrate its 50th anniversary, Roy Rogers Restaurants is partnering with baseball Hall of Famer Cal Ripken Jr. and the Cal Ripken Sr. Foundation. “Roy Rogers is a brand I have known and enjoyed since I was a kid and I am thrilled to partner with them,” says Ripken. “They are helping our foundation and looking to grow and I am excited to be a part of it.”

The first Roy Rogers opened April 6, 1968, in Falls Church, Va., and there are now 54 locations throughout the Mid-Atlantic region, including Frederick and Thurmont. Jim Plamondon, co-president of the company says, “The legacy of Cal Ripken Jr. and his streak align with our core values at Roy Rogers Restaurants including dedication and hard work, and our own ‘streak’ of 50 years of providing quality food and an experience that is a ‘cut above’ fast food.  We are committed to working together to help support our local communities.”

Known as baseball’s Iron Man for playing in a world record 2,632 consecutive games, Ripken spent 21 seasons in the major leagues, all with his hometown Baltimore Orioles. He was inducted into the National Baseball Hall of Fame in 2007. In 2001, the Ripken family founded the Cal Ripken Sr. Foundation, a national effort to improve the lives of underserved youth through programs and Youth Development Parks, multi-purpose turf fields that provide kids with safe places to play. In 2017, the Ripken Foundation impacted over 1.4 million kids nationwide through its parks and mentor programs.

Roy Rogers Restaurants will be offering customers various initiatives throughout the year including rollback prices, contest prizes and a roundup campaign and commemorative cup benefiting the Cal Ripken Sr. Foundation and the communities in which Roy Rogers is located. www.royrogersrestaurants.com

A vegetable garden started last spring by staff at Hood College and Frederick Memorial Hospital was so successful that they’re doing it again this year. Last year’s harvest produced 1,500 pounds of food that was distributed to needy families, veterans and senior citizens through the Frederick Food Bank, Frederick Rescue Mission and Kline Hospice House, as well as senior apartments such as Catoctin View, Catoctin Manor and Taney Village.

The garden was established on a portion of unused green space located on Hood property near FMH’s parking garage. The volunteers were able to grow two plantings of produce from April to October in the 13 garden plots that are tended using environmentally friendly growing practices. Organizers say they hope to grow even more produce this season, adding that a majority of the 76 volunteers last year are willing to again get their hands in the dirt.