Riding to the Top 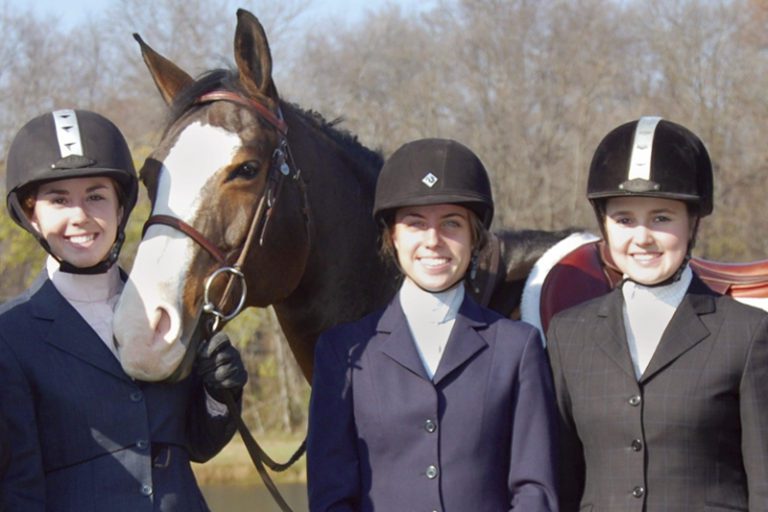 The scenery at most high school sporting events is predictable: Stadium lights beaming onto a turf field or glossy floors of a musty indoor gymnasium as metal bleachers creak and squeak beneath the spectators. But a drive down a dirt road in Olney on a chilly spring morning reveals a much less conventional high school sporting event. Instead of a perfectly manicured field or a baseball diamond surrounded by chain link fence, here you find a barn and an indoor riding arena that is deceptively quiet from the outside. Cars lining the driveway and a handful of trailers are the only hint of activity.

Inside the arena, however, is an unexpected swarm of commotion and excitement. Gangly teenage girls in black helmets, navy jackets, tall leather boots and beige breeches excitedly huddle together, looking on at the action beyond the rail. Riders on horses of all colors, shapes and sizes guide their horses through different paces as requested by a judge and announcer. To the casual observer, riding a horse well in any discipline appears simple and effortless, but experienced riders know achieving that natural appearance requires a true mastery of balance, muscle control and feel for the individual horse.

Parents with their coolers and fold-up lawn chairs are corralled in one corner of the ring while another nearby string of horses awaits their riders. Coaches in baseball caps, juggling coffee mugs and clipboards, move with purpose and direction throughout the organized chaos, high-fiving riders who earned ribbons or offering tips to those getting on.

In the midst of it all is the Oakdale High School Equestrian Team, a group of committed young athletes led by volunteer coach and lifelong horseman Karl Schreder. The team of 14 members includes riders from all backgrounds, from those who have never shown before to an experienced team captain who travels to compete in prestigious circuits. Despite their differences in experience, they all have one simple thing in common that is the key to their success: They just really love horses.

“The success comes from the enthusiasm of the girls—how much they love the sport, how much they really love horses,” Schreder explains. “It’s really the girls themselves that the success comes from. They’re not being pushed into something they don’t want to do. This is something that our girls really want to do. If you’re in a program at school, sometimes kids are doing it for the parents and not necessarily themselves.” Former team coach Betsy Hylton adds: “It’s their self-motivation. It’s about their work with their own trainers and how much riding they put in themselves during the week.”

In a sport that is commonly perceived to be reserved only for the wealthy elite, Oakdale’s team is proof that passion for the sport, and for the horses, trumps all.

The riders of Oakdale’s team don’t do this for ribbons or trophies or to get a cool T-shirt. In fact, some of their classmates don’t even know the team exists. Because the riding team is not a school-sanctioned team, they do not receive the same recognition or financial support as the conventional sports teams, but that hasn’t stopped them from rising to the top in a league of their own.

In fact, during the 2017-18 school year, Oakdale’s varsity and junior varsity teams ended the year ranking third and second, respectively, in the regional secondary school equestrian circuit. Oakdale placed the highest out of all public schools competing in the series, while beating out several private schools with funded equestrian programs. And the riders aren’t just known for their performances in the ring. Out of more than one hundred participants, Oakdale riders Sara Welgoss (varsity) and Paige Smith (junior varsity) claimed the series’ two coveted sportsmanship titles for the school year.

Oakdale, along with more than 40 school teams, participates in The Inter-School Horse Show Series, a collection of equestrian competitions in the Maryland, Washington, D.C., and Virginia areas created specifically for middle and high school riders. The series provides a platform for team competition in a sport that is typically based on individual performance.

The shows are structured to promote as even a playing field as possible, while providing a safe learning environment and confidence-boosting experience. They typically take place monthly during the school year and are hosted by riding stables with large numbers of dependable and safe horses, as well as facilities that are big enough to accommodate the riders, coaches and parents. Riders compete in English riding and are judged on their ability to control the horses at a variety of paces as well as their own body position in the saddle. Those who perform well in two “flat” classes, where no jumping is involved, then progress on to a third class, where they are required to jump a small course of jumps, ranging from 18 to 30 inches in height, depending on their level of experience.

Oakdale’s team was established in the 2007 school year by three students and riders: Jamie Suever, Nicole Hylton (Betsy Hylton’s daughter) and Sarah Schreder (Karl Schreder’s daughter). Despite the fact that their daughers’ post-college lives have taken them in different directions, Karl Schreder still fills the role of coach while Betsy Hylton can still be found helping out at shows.

Ask Schreder how the Oakdale team practices and his answer is surprisingly simple: They don’t have them, except for one session at the beginning of the year. For obvious financial and logistical reasons, it isn’t possible for Oakdale to maintain its own team of horses, so riders are required to take at least one lesson per week with an outside trainer of their choice. After each lesson, the trainer signs off on a form that details a rider’s experience and performance. This ensures that riders are getting experience and compete at the appropriate level at shows.

According to Schreder, other schools’ teams are often more formal, with required practices and training, but that tends to make participation expensive, which is why Oakdale’s team keeps things casual. Because the team isn’t school-sanctioned, riders and their families are responsible for their own expenses.

Show days are when the team really comes together. During competition, Schreder is there to perform equipment checks, make sure the riders are safely prepared to ride and give feedback on performance. Perhaps most importantly, the riders know they can count on Schreder to make them smile before heading into the ring.

Some team riders, like Welgoss, own their own horses, which participate in shows outside of the school competitions. Others ride more casually and don’t have much of a competitive agenda. Some of the team members’ interest in riding will fade away after high school, while others, like team captain Anna Ordonio, a junior at Oakdale, aspire to eventually compete on a college equestrian team.

Ordonio says the experience of riding and competing on unfamiliar horses in a team setting has been valuable for her. “I’m trying to ride on a Division I university’s equestrian team in college, so it’s nice to get on horses that I’ve never ridden before and compete because that’s like what you do in college, too. So that’s nice.”

In addition to the time in the saddle, Ordonio appreciates the unique opportunity to compete with her classmates. “I know these people from school, too. I’ve known them for years. It’s almost like any high school team sport where you have your team and you have your friends, and they’re all very supportive of one another.”

During their time together at shows, the team members swap stories about previous shows, discuss their favorite horses and help each other prepare to compete. In and out of the ring, smiles are abundant.

Wendy Smith, mother of team member Paige Smith, says the Oakdale team offers a “happy place” for horse-crazy girls like her daughter. “[Paige] has flourished as a rider and it does my heart really well to see that. … Whether she wins or loses, she leaves here happy because she’s been on a horse.”