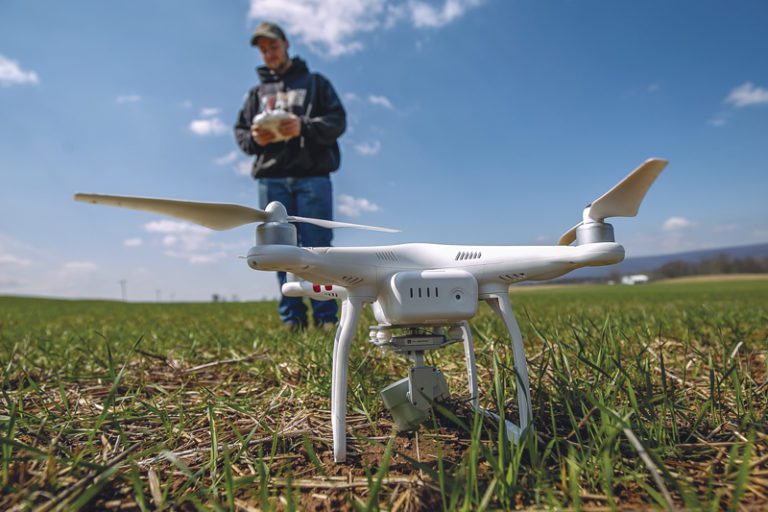 On a recent morning, Tyler Van Wingerden shows off Catoctin Mountain Growers, the flower farm started by his parents, Bob and Denise Van Wingerden, in 1985. The business, located near the Frederick County/Carroll County line in Keymar, grows potted and annual plants. And even though it has onsite retail sales, the majority of its customers are wholesale, including Walmart and Sam’s Club stores in Maryland, grocery chains, and local landscapers.

The 25-acre growing space is filled with a number of innovations to keep costs low and production high in growing customer favorites like calibrachoa, petunias and geraniums. “When people come out and look they say, ‘Wow! I didn’t think that all this went into giving me a petunia hanging basket,’” says Van Wingerden, company vice president. “There is a lot that goes into it.”

The transplanter, as they call it, uses four metal prongs to pick up young plants in small, soil-filled trays and move them into larger ones. “We can set the different measurements for different pot sizes, so that is a pretty big piece of automation we have,” he says of the 3-year-old machine. “This is an essential piece for us for the production side. We are able to produce lots of product by having this machine running.” Close by is an automatic “stickering” machine where plants ready for the stores get their Universal Product Code, measurement and additional information labels placed on the trays.

The growing area boasts nearly 70 bays (each 300 feet long by 30 feet wide), most with recessed floors that are flooded to water plants from underneath once flowers start blooming. When the plants are young and germinating, they are watered from a mist overhead by automated programmable booms. The water amounts and bay temperature is programmed and adjusted with environmental control monitoring software. So instead of having to physically come in to each bay, employees can remotely monitor each from their smart devices or computer. “You have to have these types of things to stay competitive, just because you can take care of so many more plants with less hours and manpower,” he says. “Inflation has happened on wages. It has happened on equipment. It has happened on everything. So how do you stay alive? You have to innovate to stay alive. In order to stay competitive, to be profitable, to pay employees and progress in the future, you have to be able to innovate, cut costs and be more productive.”

Van Wingerden is not alone. Many local farmers—in all areas of agriculture—are turning to technology and new techniques to become more efficient. “[Innovation] allows them to be more profitable on the same or less amount of land,” says Katie Albaugh, agriculture business development specialist with the Frederick County Office of Economic Development. “In Frederick, we have high land prices, so farmers are trying to be very efficient on the land they have. They want to maximize it as much as they possibly can. … Farmers are now, more than ever, dependent on technology.”

Innovation, Inside and Out

Catoctin Mountain Growers also recently switched to new business software that combines accounting, production, shipping and sales into one platform. “It is a much better program for us,” Van Wingerden says. “It is technology that will help us run much better and more efficiently, and hopefully have better product at the end of the day.”

On the farm, a sand filter reuses rain and other runoff water to irrigate the growing inventory of plants. “We recycle all the water that we have,” he says. “All the rain we catch on the roof goes to a pond that we then filter and use again so we reuse all the rainwater that hits us.”

With a main hallway in between growing bays that measures over 1,000 feet, bicycles are stationed throughout the facility to help employees get to locations faster. With 60 employees, the farm also replaced one channel, two-way radios with smartphones that use a walkie talkie app to set up different channels for areas such as maintenance, shipping and growing for faster communication and more privacy.

This summer, Catoctin Mountain Growers will open a new, two-acre shipping dock with gridded sections that sort carts by destination. The current facility has four bay doors that can get crowded, but the new one will have 10 doors with room to add 10 more. “That will be a big difference for us, a big improvement, we think,” Van Wingerden says. “We are seeing a lot of growth and a lot of potential for growth where we are right now. That is nice.”

Potomac Sprout Company near Thurmont turned a former horse arena into a 10,000-square-foot facility that uses hydroponics to grow conventional and organic sprouts such as broccoli, daikon radish and alfalfa found at area vendors like Mom’s Organic Market, Giant and The Common Market. Owner and founder Chris Yu, who has a food science background, started the company a few years ago after reading an article discussing how food-borne illnesses can occur with improperly raised sprouts.

The farm features three purifier/sprouter machines in a room kept at 70 degrees. Bins in the machines are filled with up to 25 pounds of seed that are rotated, given artificial light and irrigated over a period of several days. While trays are traditionally used to grow sprouts, the machine helps to reduce contamination by lowering human interaction with the product. Yu also designed a water-recycling system with softeners and filters to ensure only the purest water will be used on the sprouts. Yu notes the innovations are all geared toward making a safer, higher-quality product.

During the fall, many area residents make their way out to Gaver Farm near New Market for its annual Fall Fun Festival featuring more than 50 attractions, including giant slides, a wagon ride to pick pumpkins, a petting zoo and games. Each year, the farm picks a different corn maze theme and cuts a picture into the field. Staff used to create the scene using the strictly old school method of graph paper and flags. “It was a very laborious, long process,” says Brian House, food services manager and fall general manager.

For the past three years, the farm has worked with a company to design the maze, develop the web interface and upload a GPS map of the design. Then, putting a GPS on a lawn mower, it becomes a matter of simply logging into the map and cutting the maze. “It’s pretty accurate,” House says. “It’s down to about 12 inches or so.”

Previously, it took about three full days to cut the maze for the festival. Now, using GPS, House can cut it in five hours. “It’s a small thing, but it certainly saves time and can make a much more detailed maze,” he says. “It looks a lot nicer and more fun for the consumers. … [Innovation is important] because the world is always changing. The needs and the desires of the consumer are always changing, and if you are not willing to innovate you may not be able to capitalize on those changes.”

When scouting the 250 acres that make up Thurmont-based Brookfield Pumpkins, owner Samuel Roop can walk or use a motorcycle when the crops are small. But as the plants grow, overseeing the land becomes trickier. Two years ago, a farm employee began using his drone to take pictures of the fields, looking for deer damage areas and other problem spots. “It’s a really good tool,” Roop says.

The 500-acre Mid-View Farm in Jefferson has more than 350 dairy cows. “We feel that sand is the best possible bedding surface for the comfort and health of our cows. However, sand is a difficult product to deal with because of how hard it is on equipment,” says Becca Tucker, herd manager. A few years ago, Mid-View purchased a separator system that cleans the sand and allows it to be reused after drying out.

Tucker estimates the system reclaims about 85 percent of the sand. Before, the farm would have to order new sand every couple of weeks. “It might be an upfront cost to get these innovations and get these new technologies, but in the long run it is saving us money down the road and that is really important,” Tucker says.

The farm also uses GPS on their tractors to help with cutting production costs, efficiency and saving the environment. “There are seven to 15 satellites that send signals to the monitor in the tractor cab at any given time,” says Justin Tucker, crop and feed manager for Mid-View. “As soon as I begin planting, spraying or fertilizing, the GPS records where I have applied product and is able to shut the planter or fertilizer sprayer off so there is minimal overlap of product. Limiting the amount of overlap saves money and helps reduce runoff, which preserves water quality. We have to stay within strict nutrient management regulations and to be sure to fertilize only what the crops need.”

The GPS will also keep evenly spaced rows by steering the tractor. “When harvesting corn, grain or soybeans, we can use the GPS to obtain harvest maps which show the areas of the fields that are yielding better than others,” he says. “All of this data is used to be more efficient and target fertilizer application so we are using no more than the crops need.”