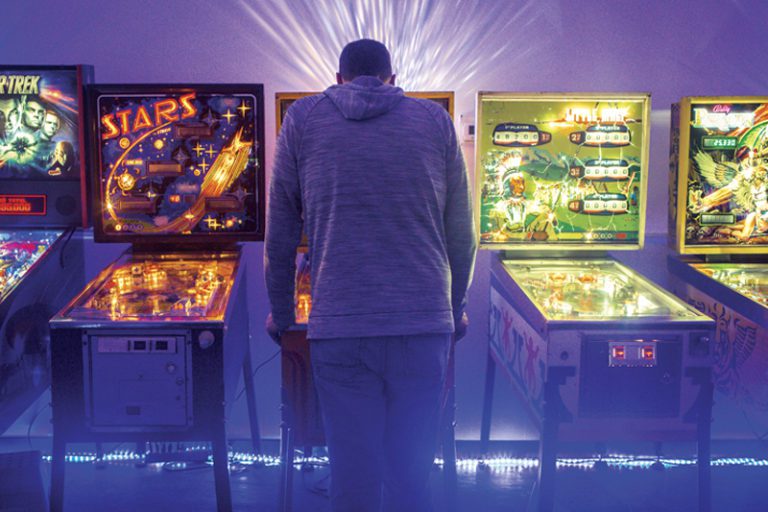 Joe Said vividly remembers his first time. He was a young guy in New York and his singular passion at the time was stoked to near boiling when someone asked him if he “wanted to look under it.” Yes, he said. “I remember the first time I looked,” Said (pronounced CY-eed) says. “It was just amazing. It was either Dracula or The Lord of the Rings and I looked under there and I was like, whoa!”

What Said saw was the inside of a pinball machine, an intricate, compact underworld of blinking wonderment. It was revelatory seeing the mechanical wizardry beneath the spinners and drop targets and slingshots that have seduced generations of players to relinquish their quarters—and hours—for the experience of guiding a silver ball across an elaborate playfield with only a pair of flippers and the occasional nudge.

“The game is super-amazing,” says Said, 40, a player of considerable stature in the competitive pinball world who wants to share his passion so others can enjoy what the resurgent game has to offer.

He opened Spinners Pinball Arcade in December in a 13,000-square-foot space on North East Street. The play area—the first phase in an ambitious plan that includes an educational space and maybe someday food and drink—is lined with games spanning pinball’s electro-mechanical golden age in the ’70s to today’s solid-state electronic units. The arcade is open to the public on weekends and charges a flat rate for unlimited plays.

But retail gaming is just a byproduct of Said’s grander vision, which is to leverage pinball’s requisite dexterities—attention, problem-solving, visual-motor skills and determination, to name a few—to help people with developmental disabilities. In college, Said helped start a successful business creating assistive technologies for people with disabilities. Later, in 2012, having already established his credentials on a national pinball circuit, he was inspired by the story of Robert Gagno, a then-23-year-old Canadian with autism who became a world pinball champion. When he came across an autism-awareness poster around that same time, it was a match.

Soon after, he founded a nonprofit called The Pinball Education Center. Its promotional literature paraphrases Plato, saying, “The most effective kind of education is to play amongst lovely things.” Said spent several years raising money from donors—mostly in the pinball community—and has poured his own savings into the venture. Donors have also loaned Said their spare machines, preferring they get played—rather than mothballed—in the furtherance of pinball’s future.

“It’s a lot of fun to share them with other people,” says George Arfken of Germantown, who has a dozen pinball machines at Spinners and is part of a group of volunteers who meet weekly to fix and rehabilitate the arcade’s machines, including many that have yet to be introduced to the gaming floor because they are waiting for parts or repair. Arfken says it’s been a long road to get to this point, but certainly worthwhile, given Said’s mission. “I applaud his ambition for taking it on,” Arfken says.

Pinball as a tool for education is not an entirely new concept. In New York City, Steve Zahler runs a museum, Modern Pinball NYC, that has the support of the local board of education. On field trips, kids are taught to repair and change bulbs and shown the guts of a pinball machine, which can have more than 2,000 parts and 1/2 mile of wire. “Then I take them on a journey through the technology over the decades, how pinball has evolved,” Zahler says, asking questions after to make sure the kids are learning. “It’s the excitement of being in a pinball place. You’re getting their attention level up from the very beginning. And they’re open like sponges. They’re open to learning.”

Zahler met Said in New York during a pinball tournament in 2011 and is now on the Pinball Education Center’s advisory board. “What Joe’s doing is incredible,” Zahler says. “It’s a really socially responsible thing to do. It’s not just an arcade but it’s helping the community.”

The Frederick pinball nonprofit’s stated goals include building educational programming for groups and individuals. There’s an emphasis on STEM (science, technology, engineering and math) instruction. And there’s a strong focus on how pinball can be an effective vehicle to foster social connections. Put another way, the organization recognizes that people with nothing else in common might find themselves conversing over the glass of a pinball machine.

“A lot of people with ASD [autism spectrum disorders] have passions. For Robert, it’s pinball,” says Kathy Gagno, mother of the pinball champ. “He has found a group of people who also love pinball and don’t mind talking about it or playing it for hours, just like he does.” His story is so remarkable it has been featured around the world, including a Netflix documentary Wizard Mode that chronicles his championship run in 2016, along with his personal challenges and triumphs. In a recent interview, Kathy Gagno says that through pinball her son has developed better social skills, learned turn-taking, practiced reciprocal conversation and has arranged the occasional pinball get-together with other players. “This fosters a feeling of inclusiveness, which is good for self-esteem,” she says.

Aaron Stephens, a support coordinator at The Arc of Frederick County, which serves adults and children with developmental disabilities, recently had a similar observation with three of his clients during a casual outing at Spinners. “They were able to socially connect in that kind of lower-key environment and start up a conversation about video games that we never saw them have before,” Stephens says. “It was really neat to see the social aspect of what that environment can bring out in people.”

Said has made some inroads into the community. Day programs drop in by appointment during the week. As part of its summer programming, the library has partnered with Said for an event in August that will have participants building their own pinball machines out of cardboard. And a local Eagle Scout candidate recently expressed interest in helping Said rehabilitate an old machine as his service project for the nonprofit. “The whole point of this place is to help kids with disabilities,” says William Hampton, 17, a student at Oakdale High School. “I like that part of it.”

Said, who has lived in Frederick for six years, hopes to make connections with the local autism community and get on the school system’s radar. And there are more phases planned in the build-out of Spinners, which will more than double its functional size. But for now, Said’s pretty happy when people come in to just play—or marvel at the magical inner workings of a recently restored pinball machine.