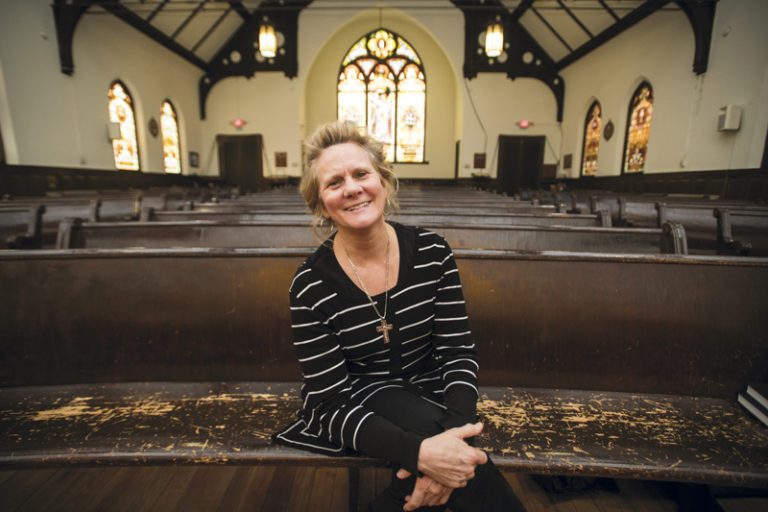 The Rev. Debra Linton walks among the pews, shaking hands and warmly welcoming people for the evening service. She calls them each by name and makes empathetic eye contact as they fill her in on their week. She leaves with a hug or a reassuring pat on their forearm and goes on to greet the next person before the contemporary worship service begins at Centennial Memorial United Methodist Church on a Saturday night.

A typical church service? Not exactly.

These are people who came for dinner at the bi-weekly soup kitchen offered in the church’s basement cafeteria, later joining in fellowship in the sanctuary for a chance to restore their spirits and find peace in the midst of turmoil. Here, for at least an hour, they are given unconditional love and support by their beloved “Pastor Deb” and fellow minister, the Rev. Mark Claiborne. Food for the soul is offered along with a side helping of acceptance.

Nearby, Downtown restaurants and cafes are getting ready for the dinner hour. Shoppers and diners are no doubt unaware that the “least of our brothers and sisters” are around the corner in a sanctuary filled with the reverberating sound of a rock band playing contemporary Christian music. Folks are clapping, swaying to the music and finding a place to free themselves from the thoughts and challenges that fret them.

Centennial Memorial UMC, at 8 W. 2nd St., has been quietly and consistently caring for people in need for decades. Challenged by declining attendance and an aging congregation, the church looked at the community and opened its doors to the homeless and those struggling with addictions. The nonprofit Second Street and Hope was formed, offering dinner on Wednesdays and Saturdays. Mission-inspired warmth is extended via the supplies offered to the homeless: warm clothing, tarps and tents, and hygiene supplies. In response to changing times, Pastor Deb opened the doors to the Emergency Family Shelter program, offering space to four families during Christmas week.

Pastor Deb’s life experiences and her passion for helping the poor dovetail with her assignment to Centennial. She lived in the world of social work and counseling until she received her master’s degree in divinity in 2010.

Centennial is part of the Downtown fabric, whether it was when the church leadership decided to paint the 1900 brick structure sage green only to see it return to its natural red in the 1990s. It’s part of the annual day-after-Christmas church tour. The sanctuary’s imposing design and interior woodwork is memorable. But much like an iceberg with hidden spaces, the structure passes easy detection, with the majority of the building closed to the general public.

The congregation began as a chapel of the Church of the Brethren in 1900 on East 3rd Street and was built at a cost of $4,000. But it wasn’t long before it was determined that the small Otterbein Memorial Chapel no longer sufficed. There was land available at North Market and West Second, and the new sanctuary was built for $19,000. The current church was built as an expansion in 1927 for $43,000 and contained 35 tons of steel.

The church merged with the Evangelical Denomination in 1946 and was known as the Evangelical United Brethren. In 1968, another merger occurred and the church is now affiliated with the United Methodist Church. The Baltimore-Washington Conference designated Centennial and its neighbor Calvary United Methodist Church as a cooperative parish in 2010, sharing in mission, administration and outreach.

A review of the church history reveals family names familiar to Fredericktonians and, coincidentally, memorialized as street names throughout town: Blentinger, Kemp, Rhoderick, Crum, Kemp and Kline, to name a few. Sadly, the congregation has grown smaller with time and the decreasing church attendance phenomenon throughout society.

Centennial’s Sunday School building was an addition in the late 1920s and makes up two-thirds of the total space on West 2nd Street. The ground under the sanctuary was dug out this decade, adding a social room and kitchen with a separate street entrance. Originally lit by glass chandeliers, the church converted to electricity and its current lanterns were installed on the eve of World War II.

“The cost of historic preservation is daunting,” admits Linton. “We have had to think outside the box for funding. Unlike other churches Downtown, we have no income from preschools or other fee for services.” She points to a 15-by-6 piece of stained glass that has begun to bow. “That small piece of glass costs $2,500 to repair and we are finding permitting costs to be a challenge we had not fully anticipated.”

A substantial gift was made to Centennial a few years ago and under the direction of Pastor Deb, the most extensive renovation in the parish’s history is underway. Volunteers and nonprofits like Habitat for Humanity have lent time and expertise to this project, and Linton admits to having little experience as a construction supervisor. The petite pastor is not above taking out the trash and serving as an assistant to the renovation team.

Extensive repair work on the steeple cost more than $100,000. Molding plaster was replaced and lead and asbestos remediation was undertaken beginning in 2016.

The 1920s-era social hall and kitchen were redone and walls were brightened with a soft aqua paint and upgraded with phone charging stations.

Challenged by finances and motivated by her mission to serve, the forward-thinking pastor sees the renovated former Sunday school building as her congregation’s future.” Our history in Frederick is based on benevolence to the community,” says Linton. “Looking to the future, we are in conversation to turn our space into a collaborative for social justice nonprofits.”

The first tenant in the modernized space is the Student Homeless Initiative Partnership or SHIP. “With Pastor Deb Linton’s urging, we elected to place an office at Centennial to make SHIP more accessible to our 4,600 volunteer SHIPmates,” says executive director Ed Hinde. “By doing so, we’re able to enhance our services that include providing new clothing, funding for enrichment activities and emergency housing for students and their families when no other options exist for the hundreds of FCPS students experiencing homelessness each year.”

The extensive renovations have created office space for other nonprofits to join SHIP and processes are being put into place to turn vision into reality. “We hope to fill this space with like-minded organizations and bring this building back to life,” says Linton, as she turns off lights and picks up trash to be taken out. “Frederick has always taken care of its own and we are here to plant more of those seeds.”