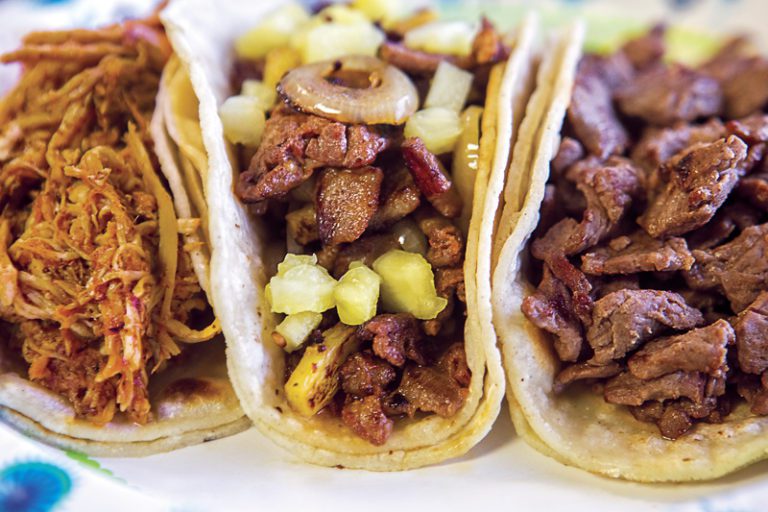 Tacos are all about the filling; the soft, starchy goodness of a warm tortilla wrapped around it is pure bonus. We’re not talking about the version using an over-salted seasoning pouch and quickly browned beef, to be gobbled between karate and ballet classes. Think, mounds of succulent, slow-roasted meats immersed in jus and intensely flavored spices or toothsome morsels seared by fire’s kiss on a steaming grill, then loaded into hand-made, double-layered tortillas.

The kinds that overflow with juiciness and make you lean over the plate so that no drop is lost. You know, the “home-style” cooking that takes more than 20 minutes and a microwave.

If you don’t have a few hours to cook or a loving abuelita (grandma) to pitch in, Taco Bar is a good place to indulge in slow-food “comida casera” (home cooking) in authentic Mexico City style. The Bar portion of this place refers to the variety of salsas and fixings set out to personalize each dish. It’s a family friendly place with a mixed clientele, either happily noshing or grabbing to-go orders. Classic Mexican tacos usually get a generous hit of onions and cilantro, maybe a bright shot of fresh lime juice, and a drizzle of pepper-spiked sauce. Adding sour cream, tomato and lettuce is an American modification, which is fine by co-owner Raul Valdivia Sr. His son and business partner, Raul Valdivia Jr., added the “Americano” option to the menu when the pair opened their second location on the far end of West Patrick Street near the light at Butterfly Lane. The original Taco Bar in Olde Towne Gaithersburg opened nearly 17 years ago.

In the 1990s, Raul Sr. and his wife were English teachers living in Mexico City. In spite of running a successful school, escalating violence in the area forced them to seek new horizons. He touches his son’s shoulder and takes a deep breath, sharing, “Life was tough. Our house was robbed twice, our cars.” He nods at Raul Jr., “This little kid was growing and we thought, ‘What can we do for him?’ We can’t stay in this city.” A brother lived in Maryland, so they put their heads together, finally agreeing on opening a restaurant. “How about food? We are Mexican.” Raul Sr. smiles broadly, noting every culture’s truism: food is our common denominator.

Starting from scratch was hard, with no restaurant experience, but they seem to be doing something right. Raul Jr. embraced the family business in earnest after acquiring a business degree from the University of Maryland. The new location is his “baby.” He chimes in, “I wanted to do a soft opening, to give my staff time to train.” Diners had other ideas. The place was packed to capacity when it opened last June. “It was mostly word-of-mouth. I asked people how they found out about us and they said, ‘We were just waiting for you to turn on the open sign.’”

Taco Bar does a bustling business. But be forewarned, everything is made to order, so there will be a bit of a wait. Raul Jr. says, “That’s the beauty of our food. We are grilling meat to order.  It’s not pre-made, sitting on a steam table, so we can tweak it around. If you want the al pastor without onion or if you want to mix two meats, we can do that.” Al Pastor is one of Taco Bar’s most popular selections—tender chunks of marinated pork, jeweled with gently browned onion and griddled pineapple that is sweet but not overpowering. The carne asada (slow-roasted beef) is a lightly seasoned portion of roughly chopped, fall-apart meat and crisped edges. There’s also chorizo (pork sausage), steak and cheese, pollo (chicken), and suadero (beef rib) options, among others. Those same fillings grace cheesy quesadillas, crunchy tostadas and burritos/bowls. The menu also stretches to soups and breakfast.

Raul Jr.’s wife, Emmy, is an accountant who puts in time at the restaurant. She didn’t grow up eating Mexican food but notes a growing appreciation for the more exotic (to non-native eaters) lengua de rez (beef tongue) and tripa (beef tripe). “That’s actually pretty good. Don’t knock it ’til you try it. Especially if you get it really crispy.” Don’t worry, there are plenty of options for vegetarians, too.

The Valdivias take pride in making all items, including marinades and salsas, in house, from family recipes. Raul Sr. says it’s easier to find authentic ingredients these days, such as Mexican oregano. They get bread for their substantial torta sandwiches from Deliciosa, a Mexican bakery across the street. The especial torta features a fried chicken patty, hot dog, ham and cheese piled on a jumbo bun.

Mutual respect among the Valdivia clan is obvious. They work like a well-oiled machine, readily giving credit to each other. Even the decor was a group effort. Each had a hand in painting the murals, including the colorful characters from the La Loteria game that grace the bathroom doors. A dramatic cluster of black-and-white photos pay homage to family members, Mexican celebrities and hometown sights. In one, a farmer trims an agave piña in Raul Sr.’s birthplace of Tequila.

Raul Jr. says the new location’s sleek, modern-industrial look belies its humble roots. “People think this is a big chain restaurant.” Although, he wouldn’t mind heading in that direction; the family is researching options for a third venue.

Raul Sr. beams in response, “I used to run everything one way. After [Raul Jr.] graduated and got involved, he did everything for the good. … We started understanding each other, discussing his ideas and my ideas. … He found out that this is where he wants to be.”

If the full dining room and glowing online reviews are any indication, a lot of hungry folks want to be there, too. One thing is for sure, it’s easy to roll out of Taco Bar just as full as their tacos, declaring, “Estoy llena,” or, “I’m stuffed”.