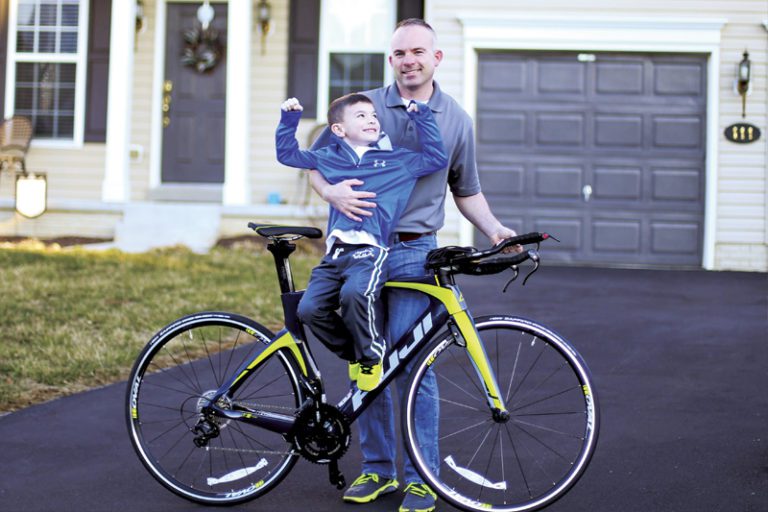 Triple the Effort to Find a Cure

Brunswick native Chris Owens has regularly raised funds for the Cystic Fibrosis Foundation, hoping the support will help with medical research and raising awareness for the disease that his 6-year-old son, C.J., has had since birth. “I’ve raised $100 here and there and $1,000 in a half-marathon,” Owens says, but his latest effort is to bring in at least $5,000 in his most grueling undertaking to date—Ironman Maryland.

The endurance event, which encompasses a 2.4-mile swim, followed with a 112-mile bike ride and finishing with a full marathon (26.2-mile) run, is scheduled for Sept. 29 in Cambridge. “My idea was to put myself through something really hard and miserable to help find a cure for something that is really hard and miserable,” says Owens, who has been in training since January. To date, the toughest test he has undertaken was last November’s annual 50-mile JFK run. “Obviously it was a hard thing,” he says, “but I believed that I could do more.”

Owens has engaged a coach to come up with an individualized training plan that has him training four to five days a week. Speaking of the three parts of the Ironman, Owens says he’s a “more experienced runner,” although “recreationally I enjoy swimming.” He once competed in a smaller triathalon on a bike he picked up in a pawn shop, but for the Maryland Ironman, “I got an actual bike” that would handle the course.

The father says his son is now old enough to understand the effort being made to support the Cystic Fibrosis Foundation and he’s excited about the upcoming event. “He knows the donations are for him and people like him,” Owens says. C.J. has been doing treatments for his condition and his parents “are able to stay on top of his health.” This spring the youngster is playing tee-ball. Owens says he has seen the progress of medical efforts first hand and considers the Ironman as the ideal way to “pay it forward.”  www.YouCaring.com/FightingCFwithIron

If you like airplanes, fast cars and motorcycles, the place to be is Frederick Municipal Airport on May 5 when the Aircraft Owners and Pilots Association (AOPA) hosts its third annual Wings and Wheels event. “People who fly also like fast cars and motorcycles and vice versa,” says Michael Woods, AOPA aviation event planner. “If we could add boating in there, we’d be complete. When you’re addicted to toys, you’re addicted to all toys.”

When AOPA’s Outreach and Events team decided to host the first event in 2016, the organization expected 100 people. Instead, more than 2,500 people showed up for the October event despite a cold day with 30-knot winds. And although it wasn’t easy for visiting aircraft to fly in, more than 100 cars and 50 motorcycles arrived.“I think the Frederick community has a pent-up desire for things at their airport,” Woods says.

The success of the 2016 event resulted in a blow-out event in 2017 when it was moved to June. Fantastic weather brought more than 4,500 visitors, more than 30 display aircraft, and, again, some 100 cars and motorcycles. “We had everything from a VW Thing to a Tesla, military vehicles and an old Plymouth. You name it—British cars, Jags, MGs,” says Woods. A “best in show” plaque is awarded in each category.

As in previous years, the event will feature a country music band, food trucks, kids’ activities and more, with the event extended to five hours—10 a.m. to 3 p.m. Woods anticipates seeing nearly 5,000 visitors this year. www.aopa.org

The Memory Ball Dancing Stars of Frederick is set for 6 p.m. to 11 p.m. Saturday, April 21, at the Walkersville Social Hall. A signature fundraising event for the Alzheimer’s Association, the event features members of the Frederick community who are known for their leadership and commitment to the cause.

Dancers compete for the Mirror Ball trophy by accumulating the most “votes” by raising funds for the Alzheimer’s Association. The Dancing Stars will perform a dance to dazzle and delight more than 300 guests expected to be in attendance. The pairs of dancers this year include: Emily and Steve Campen, Will Byrd and Sherby Weinberg, Jean and Tom Wright, Lyndsay Davis and Steve Luber, Beth and Jay Mason, Christina and Michael Forbes, Eleanor and Everett Williams, Kendall Bille and Kristin Roper, and Juanita Traylor and Josh Pedersen. www.act.alz.org/FrederickMemoryBall