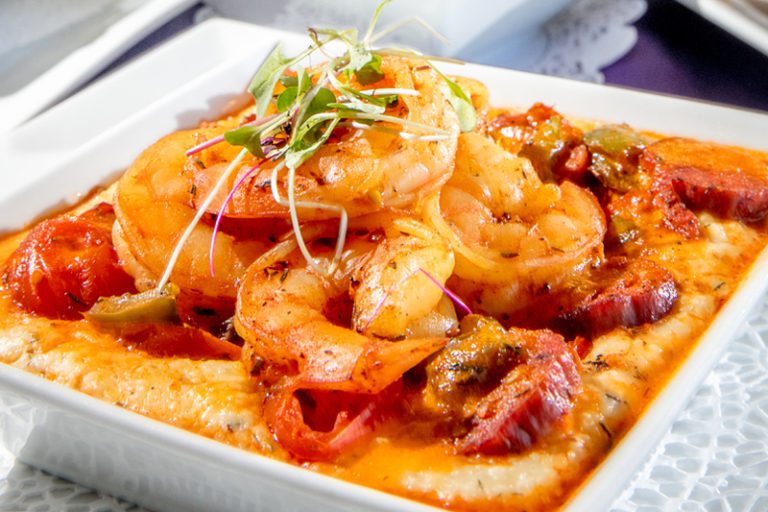 Living along the Mason-Dixon Line—often cited as the formal demarcation between the American North and South—Marylanders’ relationship with food, like their allegiances during the Civil War, could be summed up with social media relationship status lingo: “It’s complicated.”

As the northernmost “Southern” state, Maryland food traditions are somewhat of a mixing bowl. Tables here are equally graced with traditional Southern ingredients, such as greens, pork, beans, peanuts, peaches and all varieties of corn, as they are with the bounty of the Chesapeake Bay or German-inspired favorites, such as scrapple, beet red eggs and lusciously dense casseroles. And while Maryland specialties shine as brightly as any other cuisine– sweet blue crab in every form, herbaceous stuffed ham, fudgy Berger cookies or the extravagantly layered Smith Island cake—there’s a certain savoir faire about Southern cuisine that seems to channel the warmth of the sun and the spirit of its people into every soul-satisfyingly indulgent bite.

Sometimes, the difference between “here” and “there” is all a matter of perspective. Avowed Northerners lured to Maryland by job and family (like me) may feel like Dixie interlopers at first, while those who grew up a few degrees closer to the equator feel a decidedly northern air. Fellow transplant Blanch Henry grew up in Florence, S.C., and is the driving force behind Serenity Tearoom and Fine Dining. Her menu reads like a “best of” genteel Southern classics: shrimp and grits, cornmeal-crusted catfish, fried okra and a jazzed-up mac and cheese with pimento and pork belly.

She clarifies, in a mellifluous drawl, “For us true Southerners, from the Carolinas, Tennessee, Alabama, I consider Maryland Northern. I know the Mason-Dixon Line is there. For us, anything above Virginia is considered the North. It’s because of the pace of life here. Southern states are slower. People seem friendlier. They let their guard down more. … They show you Southern hospitality with a friendly greeting, even if they see you 10 times a day.” She continues, “That was one of the hard things for me when I moved up here. I didn’t get why people didn’t say ‘good morning’ [to strangers].” Henry would probably shiver at the distinct lack of eye contact between passersby on any Manhattan street.

Her eyes glisten while recalling her family’s food traditions. “You come home every day and there would be baked sweet potatoes sitting on the stove. Ham, beans and peas were the main staples. Black-eyed peas. Field peas. Butter beans. Those are normal foods for any day. … During the summer months my grandmother would buy bushels of peas and shell them, then freeze them for winter. That’s the way she always did it, so that’s what I do. … She got fresh chitlins [not “chitterlings”] and cleaned them. It was something about the freshness and control of the product. She also bought live chickens and wrung their necks in the backyard. Everything was used.” Henry giggles girlishly recalling, “I never heard of ‘chit-er-lings’ until I moved to ‘Murrilind.’”

Food can be a cultural bridge. Chris Hubbard is locally grown and co-owner of White Rabbit Gastropub, tucked behind the Church Street parking deck in Downtown Frederick. He sees balance in living on the edge. “We’re Mason-Dixon. We’re everything. We are D.C. We have everybody from everywhere. Any field that you work in around here, you will work with people from around the world. That’s the beauty of Maryland. You have every season. You have every cuisine. You have people from all walks of life. It’s amazing.”

White Rabbit’s chef, Adam Hatfield, is an avid traveler who channels new experiences and varied cooking practices into a roster of creative, seasonal dishes. “I love to eat and I love to explore different cultures. … You get to know people through the cuisine that is a part of their daily life.” Hatfield grew up in this region, but voraciously delves into exotic flavor profiles and novel techniques, sometimes fiendishly blending them, a la Pork Rind Nachos on the late-night menu. He says slight variations can make a dish unique from place to place. “People ask me my favorite thing to cook. My answer is always ‘something new.’ That’s how I learn and grow.” He is passionate about helping others explore the world through food, too.

Hatfield puts his own spin on the Southern style dishes fired in White Rabbit’s kitchen. The chicken biscuit features sweet tea-brined chicken that’s dusted in seasoned flour and fried crisp, then dressed in a tender buttermilk biscuit with cheese, pickles and a tangy Carolina gold sauce. Hubbard calls out the indulgent sausage gravy, a house-ground blend of sausage and bacon in spice-flecked cream that’s popular over those scratch-made biscuits at brunch. The secret, shares Hatfield, is using fried chicken coating in the roux (the starch/fat blend that’s browned and used for thickening). “It has different notes, with a little bit of spice and a little bit of sweetness and great mouth feel. Once you take a bite, you want to keep going back.” The downside is you might also want a cozy nap afterward.

Jeff Beard, executive chef at The Wine Kitchen on the Creek, whips up some Southern favorites, too. His fried green tomatoes are perennially popular. Uber seasonal, Beard’s menu changes randomly based on what’s fresh and available. He’ll reach for locally grown greens, especially collards, tomatoes and heirloom corn. He says that produce is a definite perk of the season. “We always look forward to spring because we try to source from local farmers and purveyors.” That’s why diners will have to wait until late April or early May to enjoy the tart burst of cornmeal crusted green tomatoes again. As an option, The Wine Kitchen’s pork belly appetizer is always on the menu, since its first farm-to-fork dinner five years ago. That’s succulently fatty meat glazed with maple-chili oil and served over creamy grits made with red floriani corn from Nick’s Organic Farm in Potomac.

“I enjoy Southern food,” says Beard, who is classically trained. He started his career at Firestone’s and worked in Europe for a while. “My ties to Southern cooking are through the French avenue, which is very process- and technique-driven. I think Southern food and French food are very similar.” Both rely on rich flavors and attentive care. He notes the evolution of recipes, like fricassee and gumbo, as a mix of French country, Spanish, African and native influences, especially in Creole and Cajun cookery. He nods thoughtfully, “If you can cook French, you’ll probably enjoy cooking Southern-style food as well.”

Like Hatfield, Beard is a fan of fusing ingredients and methods to give diners something new. He recalls a duck dish created by a sous chef that merged peanut purée with chilies and Ethiopian seasonings. “The African spice blend shared a lot of flavor notes with Southern cuisine. I think of peanut farmers and Southern food.” Virginia, known for its peanuts, holds an annual Pork, Peanut and Pine Festival on July 21-22 in Surrey County (www.porkpeanutpinefestival.org).

In New Market, executive chef Stephanie Wilson is dubbed the “heart and soul” of Vintage’s restaurant kitchen. She also lived in South Carolina and offers her take on the hallmarks of Southern food: “To me, characteristics of Southern cuisine are family, traditions, customs, comfort, hospitality and soul satisfying. It is food that takes time to prepare and invites you to take the time to enjoy.” She sees the Southern food influence expanding beyond the borders of Dixie, especially as population mobility and access to information increases. In this way, Southern food is fast becoming simply American food.

Some of the most popular dishes on her menu are fried chicken and waffles and farmer’s risotto, along with Southern favorites like hushpuppies, which are elevated with a drizzle of smoked honey and charred scallion butter, and divine deviled eggs, augmented with pickled peppers and smoked paprika, or smoked beef brisket. The pickled vegetable starter is a blend of seasonal pro with herb butter and fried saltines. Wilson’s personal favorite, “The Farmer’s Pig: smoked stone-ground blue cheese grits, BBQ sauce and Rice Krispies-battered onion rings. The ultimate comfort food!” She credits her family for inspiration as well as reading and personal experience. “In cooking, you can express your creativity and give others a glimpse of you in your food.  I think this ties to what Southern cuisine is, that sense of comfort and coming home.”

It’s hard to believe there’s any chance that Southern cuisine would fade quietly into history, but one nonprofit organization is dedicated to “the documentation and celebration of the diverse food cultures of the American South.” The Southern Foodways Alliance is an institute of the Center for the Study of Southern Culture at the University of Mississippi. Its work sets a welcome table via cookbooks, newsletters, reference links, academic studies and exploration of all aspects of regional food.

In New Orleans, anyone who eats can appreciate the Southern Food & Beverage Museum (SoFAB). It is a nonprofit, living history organization dedicated to discovery and understanding, celebrating centuries of convergent cultures that fed the South’s unique culinary heritage. It is housed at the National Food & Beverage Foundation (www.natfab.org/southern-food-and-beverage). Admission includes access to The Museum of the American Cocktail’s New Orleans Collection and La Galerie de l’Absinthe. There is an affiliated hospitality/culinary library and a Pacific Food & Beverage Museum. If you plan to visit, check out the program calendar. The museum has special events and demonstrations at least once a week at the Rouses Culinary Innovation Center by Jenn-Air. Online, SoFAB’s expansive international culinary dictionary, www.NittyGrits.org includes multi-language translations of food names from around the world in vernacular and scientific terms.

Sitting amid her bright dining room, surrounded by heirloom teacups, Serenity Tearoom’s Henry attempts to sum up the essence of Southern cuisine. “My grandmother had a saying, even if she couldn’t do anything else for someone, like helping them financially, she could invite you to her home and cook you a good meal. That was her way of showing love and hospitality. Having you to sit down at her table and enjoy her food. … It’s good food. It’s good home cooking.”

It seems that, no matter the dish, “cuisine” is the distillation of heart and cultural heritage. The sweet spot is finding connection and commonality in a world full of exotic flavors, textures and aromas. Even as boundaries blur, we know it when we taste it.