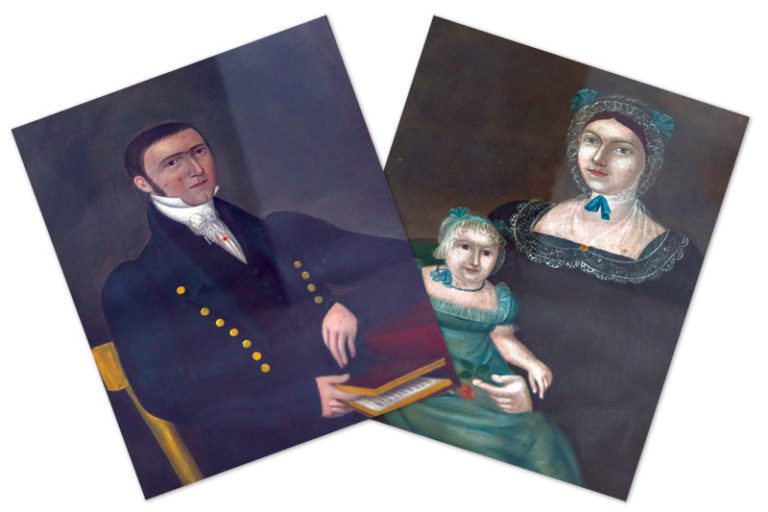 Before the days of photography, the only way to produce an image of yourself was to have someone paint your portrait. In the case of German immigrants E. Frederick and Anna R. Klein, who settled in America around 1820, they hired a professional artist.

Joshua Johnson painted these portraits after the Kleins moved to Baltimore from Pennsylvania, around 1822. An African-American, Johnson was born into slavery in 1763 and gained his freedom in 1782. According to some accounts, he lived for a time in the household of Charles Willson Peale and was tutored by the famous artist. From 1796 to 1824, Johnson worked as a portrait painter in Baltimore. Beginning in 1825, he lived in Frederick County and died around 1826.

Frederick Klein was born in 1790 in Wortemberg, Germany, and was trained as a baker. After serving in that trade in the army in Switzerland, he sailed to America. For two years he worked as a baker in various towns in Pennsylvania, and then opened his own bake shop in Baltimore. He and Anna were Lutherans and they had ten children, of whom six reached maturity. In 1840, due to Frederick’s ill health, they moved to Frederick County.

It’s likely that the Kleins hired Johnson around 1822-1824, when they were all living in Baltimore.  Perhaps the Kleins commissioned the portraits to record their success in the New World. Fortunately for us, we have these paintings to document their story.

These portraits were donated to Heritage Frederick by Charles Klein in memory of J. Natalie Klein. Heritage Frederick’s Museum of Frederick County History at 24 E. Church Street is currently closed but will reopen on May 5. For details go to www.frederickhistory.org.