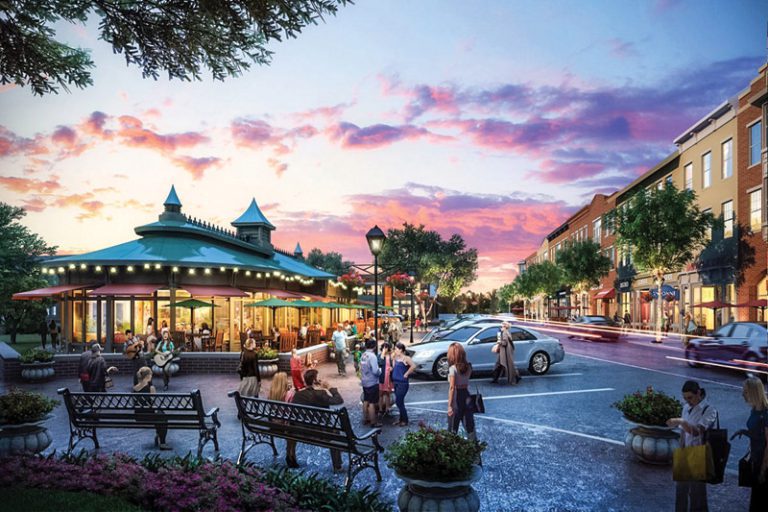 Chris and Karen Highland spent 15 years living and raising their family in Lake Linganore before moving to the outskirts of the City of Frederick. Two years ago, after their children had moved out, they relocated to Downtown.

Chris Highland, a local real estate agent, notes a classic example of their favorite date night doesn’t involve a car at all—just a 10- minute walk. He orders fajitas to go from Cacique and stops in Viniferous so owner Bob Kannor can recommend a nice bottle for him. He walks back home and the couple picks a selection off of Netflix. “That’s the Downtown attraction,” he says. “We are thrilled with it. We are absolutely thrilled with being able to walk to this, that and the other thing without ever having to get in our car. I can do business with people without getting in my car. … If you think about the lifestyles that architects and developers are creating, they are going back to this. They are going back to the ‘live, work, play’ here. You are seeing that.”

It isn’t just happening in the middle of the city. Take a look around at recent developments like Clemson Corner/Market Square, which combine residential apartments and townhomes with commercial properties such as restaurants and shops. More are planned for the area over the coming years.

“When you think about when society first started and communities first started, everything was walkable,” says Nicole Lapera-Holler, Realtor with the Lapera-Holler Team of Real Estate Teams. “You worked, played and lived all in the same area. It wasn’t really until after World War II that suburbia came in, that people wanted to be spread out. They wanted more of a living community.”

The catch was that automobiles would be needed to go everywhere. The trend for urban development started in the late 1980s but didn’t really become implemented until the mid-1990s. “When you look at the historical trends of where things are going, it is interesting we are going back to the concept where people are about convenience,” Lapera-Holler says. “People are about living where you work, living where you play. Being close together.”

She cites the Kentlands in Gaithersburg, conceived in the late 1980s, as one of the first traditional neighborhood design concepts pairing walkability with mixed-use development. Other planned developments would follow closer to home, including Spring Ridge and Whittier with houses paired with a strip shopping center, and later The Villages of Urbana created in 1999.

There are a number of proposed developments in the “live, work, play” mold. Ausherman Properties is planning to create luxury apartments at Kemp Hall at 2 E. Church St. The nearly 17,000-square-foot historic building is currently home to The Candy Kitchen and Wastler’s Barbershop, which will be maintained while the top floors will be converted into the residences.

Jefferson Technology Park off of U.S. 340 south of the city was initially billed as mixed-use but so far only less than 500 houses out of more than 800 proposed have been built. The project, which was also supposed to include a hotel, townhomes, condominiums and 1.4 million square feet of office and retail space, is currently the focal point of proposed county legislation that would expand the types of development permitted in mixed-use districts. Developers are looking to add warehouse, wholesale and distribution companies to the area, but residents have voiced their concerns over such a change.

Worman’s Mill, a 300-acre planned neighborhood development, is in the process of adding The Village Center, set to feature apartment buildings, an assisted-living facility, restaurants and a nearly 20,000-square-foot retail center with 34 apartments on the second level. “This is the jewel of the crown,” says Ed Wormald, owner and managing partner of Wormald Co. “It is the centerpiece to the whole community which is one of the last elements to be created.”

Wormald’s father and company founder Robert K. Wormald purchased the property in 1978 and the first homes were build in the late 1980s. “The concept from the beginning was to do an intergenerational age-targeted community that had a sense of a European piazza in the middle of the community sort of like a New England or Vermont small town with a town square in the middle and a place where people can congregate, be with friends and have a meal,” Wormald says.

The first shops in the retail building should open around May and about half the apartments above have been leased. Signed tenants include hair salon Elements of Style, a dry cleaner, a nail salon and Edward Jones investment company.

The next building, nearly 5,000 square feet, is set to be completed this month. Wormald envisions the space for one or two restaurants and he is in talks with potential tenants. Another restaurant pad, just over 3,000 square feet, is next for completion. “Everybody in the community has to pass your restaurant or shop before they go anywhere else,” Wormald says. “If you are offering excellent products, you get the first opportunity to sell to all these people that have some means. It’s a great place to have this resort boutique type retail experience that is a one of a kind in Frederick. It’s sort of like a taste of Downtown Frederick in a casual atmosphere.”

The main apartment building, featuring 45 units, is built up to the second level currently and its estimated completion date is December. Two more apartment buildings, with 51 and 41 units respectively, are set to be finished in January 2019. The assisted-living facility, which is currently in the design stage, is estimated to be completed by March or April 2019.

The benefit of mixing residential with commercial is better lifestyle and quality of life, according to Wormald. “You can walk your dog down the street,” he says. “Meet up with a friend. Go get a cup of coffee and sit at a table outside and visit with one another. You can have a meal that is within walking distance. Just enjoy life without your automobile and also enjoy interfacing with your neighbors and having a real sense of community. … What we’ve done is sized the retail such that the neighborhood can support it, but we’ve made it available to the whole community of Frederick. The retail becomes this exquisite exclusive location on a green that is serving the highest per-capita income area of the city but is available to anybody that wants to come in and enjoy the experience. Together, it forms this really neat way of caring for people as they age and giving them a really nice environment and place to thrive.”

The developer also owns the property between Worman’s Mill and Wegmans and plans to build a road to connect The Village Center to Clemson Corner. “People will be able to walk to a lot of retail, not just The Village Center,” Wormald says. “It is a great place to live because there is peace and quiet but there are also walkable amenities all over.”

The European piazza development was Wormald’s father’s dream going back more than 30 years. “It’s been really a lifelong pursuit for our family and fulfillment of a promise to all the purchasers within the community,” Wormald says. “… As developers, we create something and leave it behind and move on, but we want to be very careful to leave something that is a betterment to society and so we believe this is an excellent place to live and that long term it will be really nice for people to thrive there.”

Fire in Ice, hosted by the Downtown Frederick Partnership on the First Saturday in February, is one of the most popular events of the year thanks to a combination of creative ice sculptures and fire performers. Thousands of people descend upon Downtown Frederick every year for the event but Chris Highland never has to worry about parking. “We are close to all of that without having to put up with the headaches of getting in and getting out with parking,” he says.

Lapera-Holler notes all ages see the appeal in “live, work, play,” but younger people are especially finding Downtown Frederick to be attractive. “Whether they are renting or buying, the younger generation wants to walk,” she says. “They want to walk to the restaurants and bars. [There are] jobs that are down there and the good news is more jobs are Downtown now and it is the convenience factor. That’s probably the biggest thing. I live here. I can walk. I can save money on gas.”

But she is also seeing a trend that the older generations want to come Downtown, as well. The condos right on Carroll Creek are popular for those who are downsizing but want to be where the action is, like having a front row seat for the Alive at Five concert series over the summer or a great view for the annual New Year’s Key Drop. “There are so many people who want to be in the mix and that is where it is,” Lapera-Holler says.

Highland notes there are a number of up-and-coming condo projects Downtown that are being developed to accommodate the high demand. “If you are trying to rent a small, inexpensive place Downtown, you have a line of people ready to take it from you,” he says. “You get the whole spectrum of different demographic and income levels and all that stuff. The market Downtown is hot. There is definitely no question.”

But if you like the solitary, quiet life, this real estate trend might not be for you. “You’ve got to be a person that doesn’t mind opening your porch to the latest arts festival or a band playing across the bridge from the library,” Highland says. “That kind of stuff is going to go on. … You’ve got to be a social person. You have got to be up for the noise. You can’t expect to be left alone. If you want to not hear anybody else ever including your neighbor having a good time on a Friday night, then Downtown is not for you. I think Frederick in particular is a unique Downtown. It is incredibly vibrant. The businesses working with the community together have created a rare vibrancy Downtown.”

When buying a property, Lapera-Holler tells her clients to always think about resale, including if you live above a business. “Some things that may not bother them could bother a buyer,” she says. If you live above a salon, there may be smells, or [above] a bar the noise may be a factor. “If it is something that they have a concern about it, chances are when they go to sell, there are going to be other buyers that may also be concerned with those items,” she says. “The good news is there are always going to be people who it won’t bother. … For the percentage of people who won’t even consider the property, there are still going to be those who will.”