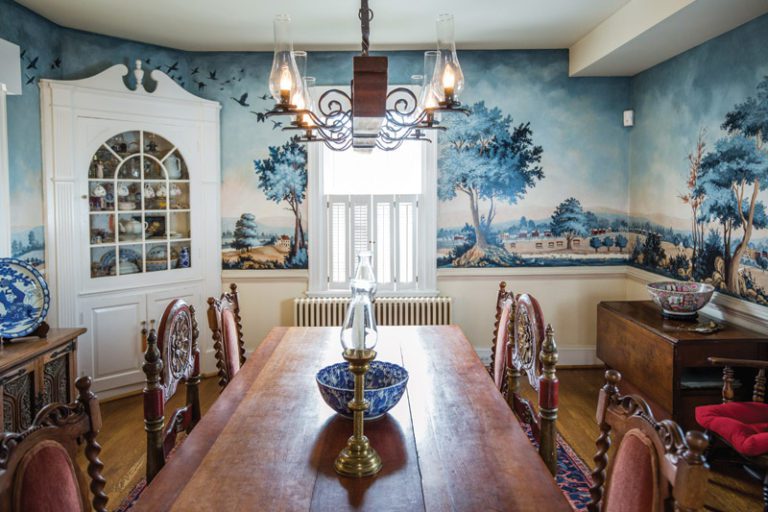 Fifteen years ago I was sent out on assignment to interview local muralist, Virginia McLaughlin. Who knew the journey would be so long … or inspiring?

At the time, I was a regular contributor to Frederick Magazine and Dan Patrel, then the editor, asked me to interview McLaughlin, saying nothing more than she is a Frederick artist who paints historic murals, then adding something like, “Oh yeah, she’s 80 years old.”

What I found was a sprightly, charming, talented and gracious woman who belied her age by a decade or more. Anyone who has ever met her knows what I mean.

McLaughlin is an artist. I am a writer. Our careers in tandem recently culminated in a book, Itinerant Painter—Virginia Jacobs McLaughlin: A Lifelong Brush with History, which her family asked me to write about her life and career. Somewhere in the interview process I realized I was learning as much from her as I was about her.

While writing about McLaughlin, her home and many of the other local homes featured in the book, and watching her fearlessly climb ladders and scaffolding to grace residences and public spaces alike with her talent, I came to realize this is who she had been her entire life: A doer, a woman with goals for herself and her art.

As we talked about her personal history, her travels and art education, a path of interest began to emerge. From those beginnings as a faux finisher and decorative painter with an antiques shop in Pennsylvania, to an accomplished historic muralist, the path became clear.

And it made a lot of sense.

Art as the guiding influence in McLaughlin’s life goes back to a contest won in elementary school, followed by an art program in high school, then scholarships earned to Stephens College and the University of Missouri in her home state. Marriage to her husband who was with the CIA took her to Germany and Japan, where her art was influenced by the cultures of those disparate locales. Upon their return to the United States, the decision to refurbish a circa-1850 stone house along the Mason-Dixon Line fueled her interest in wood-graining and decorative painting and introduced her to the murals and stenciling painted by early-American itinerant painters.

Inspiration for her unique and very recognizable style came from two very different men: the primitive style of 19th-century American itinerant painter Rufus Porter, and the more sophisticated vistas of 18th-century French wallpaper designer Jean Zuber. Underlying it all is her deep love of history, especially of this region where she’s spent most of her life.

History has always been a guiding force in McLaughlin’s work. A thick notebook with names, addresses, paint swatches and design notes is a treasure—an archive of her career and a ready reference for the locations featured in the book. Most details she quickly remembers clearly, using the notebook only to check dates and the spelling of the names of the Benjamin Moore wall paint she uses exclusively. Why? “Because it dries quickly, allowing me to make corrections as I go along,” she says. She never sketches the murals before she starts painting; at most, she draws in the horizon. Everything else is freehand. It’s an approach she learned painting window backdrops at Jelleff’s department store in Washington, D.C., as one of her first jobs out of school.

Of the more than 120 murals she’s painted over more than 30 years, most are in private homes; just a handful in public spaces. They always are a collaborative effort between McLaughlin and the client, be it a homeowner in Frederick or the curator at Mount Vernon. Sites, buildings and the details of the surrounding countryside are discussed during the planning stages so when McLaughlin begins the mural her mind’s eye sees the finished product.

Some of the more interesting details in the book include a hot air balloon used for reconnaissance during the Civil War, the Naval Academy in Annapolis as it was during the 1800s and the 16-sided barn at Mount Vernon when it was George Washington’s plantation. Politicians in historic settings are often featured, as well, like President Abraham Lincoln on the observation platform of a train in Frederick, Civil War Gens. Ulysses S. Grant and Robert E. Lee on the battlefield in Gettysburg, and the Marquis de Lafayette being warmly welcomed to Frederick in 1824. Other cultures are sometimes represented, too, as in McLaughlin’s depiction of Carnivale in Venice, a Chinese family picnicking along a river bank and Native Americans in Blacksburg, Va.

Several years ago, after receiving the HUE award from Benjamin Moore paints, she was asked by one of the company’s vice presidents if she would come to the company’s headquarters in New Jersey and paint a mural in the lobby. She declined, citing her age (90 at the time) and her reluctance to be away from home for the several weeks it would take to complete the job. Still, she he was humbled by the invitation—but then, she’s always humble, never seeking the center of attention and not comfortable when she is.

It was only after a new medication made her a bit unsteady on her feet a few years ago that she decided her painting career was at its end. “Climbing ladders didn’t seem like such a good idea,” is how she explains it. When asked if she does other kinds of painting now that she isn’t painting murals, she simply says no, with a smile that seems to add, Murals are what I paint. It’s that or nothing. Nothing else is of interest.

Working with McLaughlin to write the book was a soul-expanding experience. I learned what elements fostered her love of art and influenced her career choices, which places on Earth would later spark the execution of a mural that ‘just fit’ a home near Frederick. Retelling stories of people and places, she let me glimpse into her heart and soul.

She’s direct but gracious in that enviable Midwestern sort of way. She’s quick to declare her talent God-given, and as such tries to do her best, always. She never stopped learning, or honing her talent realizing it’s the best tool in the box.

Although McLaughlin’s activities no longer include climbing ladders and schlepping cans of paint, she stays active. “It’s essential,” she says, noting twice-daily walks with her dog Mokie, going to the gym three times a week and frequent luncheons and meetings with friends. Keeping up with current events, reading and discussing history and women’s issues are also high on her list.

No, it seems that this inspiring woman who has been vibrant, relevant, and involved all her life is definitely not retiring. Not in any sense of the word.

Jeanne Blackburn’s book Itinerant Painter—Virginia Jacobs McLaughlin: A Lifelong Brush with History is currently available at Curious Iguana in Downtown Frederick. Proceeds from the book will fund a scholarship for young women in need who wish to pursue an art education. A book-signing will be held on Sunday, April 8, from 3 to 4 p.m., at the C. Burr Artz Public Library. More information about McLaughlin, including a video, is available at www.virginiajacobsmclaughlin.com.