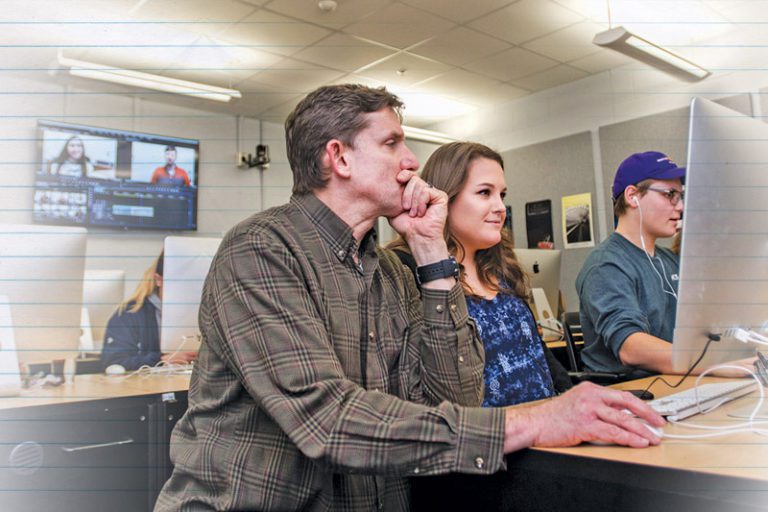 College Journalists Sharpen their Skills for a Changing Media Landscape

It’s a small room, much smaller than most class-rooms, but the state-of-the-art equipment within its walls may just be the future of journalism.

The Multi-Media Lab at Hood College contains a cramped recording studio, where interviews can be live-streamed and podcasts produced. This little studio, built with $20,000 in seed money from the Delaplaine Foundation, along with a $10,000 contribution from alumni, is one of the bright spots in local scholastic journalism.

But there are actually many others. Despite years of dwindling respect and an often-dim job market, students still want to learn sound, ethical journalism techniques, and their professors want to make sure they get that training. But, to be sure, this is not your father’s journalism, delivered to the door in a plastic sleeve every morning.

“Students today have to become multi-media communicators,” says Donna Bertazzoni, professor of journalism and director of communication arts at Hood College. “You have to be able to write, even if you’re writing for radio or TV.” Or the web.

The power of student journalism isn’t lost on the community. In 2015, The Mountain Echo, the student-run newspaper at Mount St. Mary’s University in Emmitsburg, obtained an email exchange detailing then-President Simon Newman’s plan to dismiss 20-25 incoming freshman in the month after school began. The reporting, by students Rebecca Schisler and Ryan Golden, also contained statements from named college administrators recalling that Newman referred to the students as “cuddly bunnies” who have to be “drowned.” Newman also added, according to the administrators, “Put a Glock to their heads.” Newman resigned in Februrary 2016.

This story was packaged in a traditional student newspaper. But the methods of presenting those stories are changing, even if the stories are gathered the old-fashioned, shoe-leather way, by making phone calls and cultivating sources.

The Hood studio is a cramped 12-by-20 room into which a dozen students in Tim Jacobsen’s Visual Media Production class crowd. The class typically meets in a computer lab in Tatum Hall, but they come into the multimedia room to work on a weekly interview show and produce livestreams.

“This is our first step toward a long-term goal,” Jacobsen says. The plan is to expand the college’s digital journalism program to cover the third floor of Rosenstock Hall, allowing the students to seamlessly move between their computers, classrooms and the lab to produce the news.

“We have the ability to livestream to the Hood College YouTube channel,” Jacobsen says. The new digital media lab gives the livestreaming a television-quality look. LED bulbs allow the lighting to be altered as needed. There’s a professional-looking desk where an interviewer and a subject can sit, while other students operate three Blackmagic cameras with teleprompters. Other students provide the graphics.

The equipment to operate the studio is in a small control room in the back, separated from the studio by a wall with a large window. This room contains Blackmagic production equipment. Images can zoom in and fade out, and the three cameras allow students to switch viewpoints.

All this technology allows the class to create a weekly news show, In Focus, to highlight what’s going on around campus, Jacobsen says. The HCB (Hood College Broadcasting) show will look ahead to coming events and review past events on campus, including footage and interviews. “We’ll work with The Blue and Grey [the college newspaper] to promote upcoming issues,” he says.

The students quickly separate themselves into roles that fit their skills. Maya Douglas, Brandon Green and Tim Sylvia are natural on-air talents. Kristina Hong is behind the camera. Elmer Diaz and Tyler Cook are operating the teleprompter, encouraging the on-air speakers to present just the right cadence. Peggy Trujillo calls herself the jack of all trades. Douglas is also the editor of The Blue and Grey. Trujillo worked as a journalism instructor while serving in the Navy, and plans to teach at the college level. Green plans to go into sports broadcasting.

Jacobsen, who is also a photojournalist and freelance photographer, wants to make sure his students have the tools to succeed, whether they go into journalism or apply their skills to another profession. “Gone are the days when you could get a job just as a writer or still photographer,” he says.

It’s not easy to give them those tools in a class that meets only two days a week, for an hour and 40 minutes each time. Now, the students are limited in the amount of time they can get into the lab, which is locked when the class is not meeting.

But the program is already expanding. The Delaplaine Foundation has given Hood another $30,000 for a Macintosh computer lab that will link to the multimedia lab. The Macs will be installed this summer, in a classroom next to the lab, saving students from making the walk over from Tatum Hall. Also to come is a class on podcasting. The students are enthusiastic about their opportunity.

“This class will give me the skills I need,” Cook says. “I just need more practice, all the practice I can get,” adds Green. Sylvia wants to host a broadcast like The Daily Show. Diaz says he’s getting the foundation he needs for a journalism career.

Bertazzoni, who spent the first part of her career as a reporter and editor, says the college has always had a hands-off policy when it comes to students covering the college, allowing students the independence to report the news according to the ethics and standards they learn in their journalism courses. The multimedia lab, she says, allows them to do just that, using the latest storytelling methods.

In 2015, Frederick Community College revised its flagging journalism program, offering two classes. In 2016, the college revived a print version of its student newspaper, The Commuter. Magin LaSov Gregg, a former journalist herself, teaches the classes and advises the newspaper.

“The newswriting course has maintained enrollment,” Gregg says. The second class, a practicum on publishing, is offered every spring. Both classes typically attract about 10 students. “They’re excited,” she says of her students. “They have a lot of energy and they’re open to learning.”

The students are advised to be independent, to cover the college as any journalist would. “They learn to talk to people they don’t know,” Gregg says. She does not censor their work. “I’m a neutral party. I have no editorial jurisdiction of The Commuter.”

In the publication class, she says, “I read the stories and give feedback.” She looks for good storytelling techniques, fair and balanced reporting, and attribution. She encourages the students to revise and revise again. “So much of writing is revision,” she says. She also encourages students to read each other’s work and learn from each other.

“The students are open to my feedback and to the feedback from their peers,” she says. “I see the energy and enthusiasm of my students.”

Gregg is excited that FCC, which serves many non-traditional students and students who often work long hours at part- or full-time jobs, has students committed to learning about journalism, either as a career choice or to sharpen their writing skills. Three students applied to be editor of The Commuter this semester, the first time in recent memory that has happened.

“Students have to be open to multimedia and other forms of storytelling, and open to promoting their stories over social media,” she says. Journalists traditionally aren’t into promoting their work, preferring to let their work speak for itself, but it’s a new reality, she added.

“The college has dedicated resources to our program,” she says. Gregg works with Lisa Sheirer, who teaches photography graphic design, to teach students photo and design skills for the print and online products. “Our students are early in their training and education, but if they choose to go to journalism school, they’re prepared.”

Louis Lawrence, managing editor of  The Mountain Echo, says the newspaper publishes bi-weekly with a web update each week. “The newspaper does receive funding from the Department of Communications, but the faculty advisor lets us run the show,” he says. Pratibha Kumar, the advisor, offers the students her expertise and background knowledge, but the students call the shots.

That was also the policy during the Newman story, when Ed Egan, who is still a professor at the Mount, served as the advisor.

Much of the news focuses on college events and sports, but there is also an investigative beat. The college’s Catholic identity is showcased. But, Lawrence adds, “We try to give a voice to everyone on campus.” The newspaper is “a place where conversations are started.”

There’s a community feel to the newspaper, Lawrence says. “The faculty are very open with letting us know when different activities are happening,” he says. The newspaper is the place students go to learn about events on campus. But it’s also the forum to learn things they might not get in a press release. The paper recently carried a story on tuition increase at the college.

“We want to make sure our stories are told in the proper way, with a number of sources from various levels, and what the students are saying,” he says.

The Newman story “was such a monumental piece of journalism,” Lawrence says. “We want to continue in that vein.”

The newspaper is writing about the LGBTQ community, about sexual harassment in the news and about a program encouraging more women to run for political office. “We try to give voice to everyone on campus,” Lawrence says.

Christie Wisniewski is taking a break from her new job as a reporter at The Recorder, the daily newspaper in Greenfield, Mass. “I just pounded out two articles,” she says on a Sunday evening. Like many cub reporters, she works a weekend shift. The Wolfsville native is a home-grown journalist.

Wisniewski was in Gregg’s first journalism class at FCC, where she entertained the idea of becoming a reporter. She then transferred to Hood College, where she not only took classes and worked on The Blue and Grey, she also competed for and got a paid internship at The Frederick News-Post.

She felt well prepared for her new vocation. Like any journalist, she’s becoming an expert on topics she never dreamed about. “I have a file folder about elevators,” she says. “I’ve had to learn a lot about decommissioning elevators.” She also learned the difference between concrete and cement, a nugget she has filed away to use if she becomes an editor.

Her local government experience helped her adjust to her beat covering three local towns. With print journalism, alongside an online presence, still a mainstay in small towns across the United States, she wants to get as much experience in the profession as she can. “I love writing,” she says. “I’m not so much about getting up and talking.” At the same time, she adds, “Journalism is constantly evolving, and I have to keep up. I can do that.”