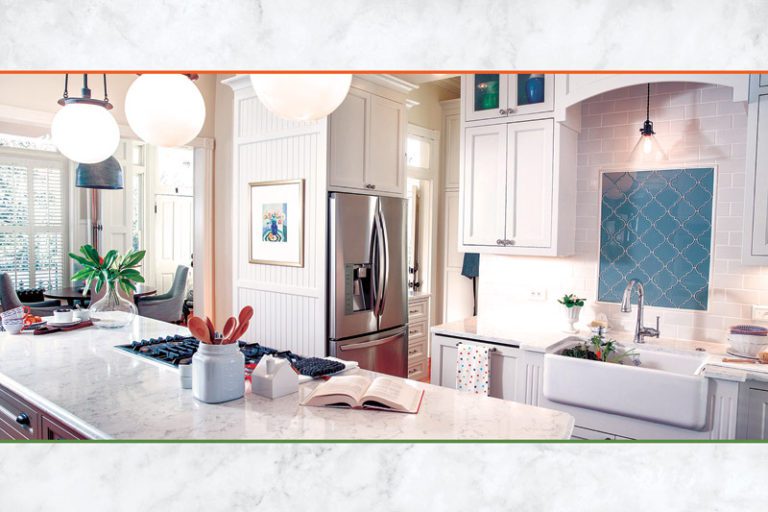 What makes a house a home? Does it have to be a historical single-family abode or can it be a gleaming modern condominium? Or does all that matter is the people inside?

In this, our annual “home and garden” issue, we take a look on the following pages at two different Frederick residences, with two different layouts and two different ways they were reimagined by their owners and designers. Although they are just a few minutes from each other by foot, they are worlds apart in their look and feel.

And yet, they both capture their own taste of Frederick style, and both are distinctly homes.

After raising their family in rural Montgomery County, Susan and Mark Smith were ready for the amenities of “living in town.” The residential neighborhoods in historic Downtown Frederick seemed to be an ideal fit for the newly retired couple. It was easy for the Smiths to fall for a charming 1895 Queen Anne home on Clarke Place, a corner lot with plenty of garden space.

Like so many houses of this style, the footprint is a series of individual rooms and compartments that lead you through the spaces, much different than modern open-concept floor plans. Fortunately, most of the interior rooms were meticulously cared for over the years and move-in ready. But the kitchen/sunroom screamed 1980s and needed a complete renovation, what interior designer Meredith Ericksen of Tuscan Blue Design likes to call a “gut renovation”—taking the footprint of the spaces and re-envisioning them with a much-improved layout and design.

In every renovation project there is a wish list. When Ericksen first met with the clients, Susan Smith says with a smile, “We want it all in this kitchen.” They loved the coziness of the grand, old Queen Anne home, but in the kitchen they wanted an updated, functional space that revolved around cooking, family and friends. Plus, it was essential that the design retained the feeling of the existing historic character as much as possible.

Initially the Smiths envisioned a big center island that would become the hub for cooking, food prep, entertaining and visiting. Fitting this idea into the existing narrow space proved to be a challenge. Tuscan Blue knew that certain walls could come down to create an open space, but that still didn’t allow enough room for the kitchen island concept. The aha moment came when Ericksen decided to steal a few feet from the existing built-in china cabinets in the dining room. It was just enough space to widen the kitchen and allow for the large center island. 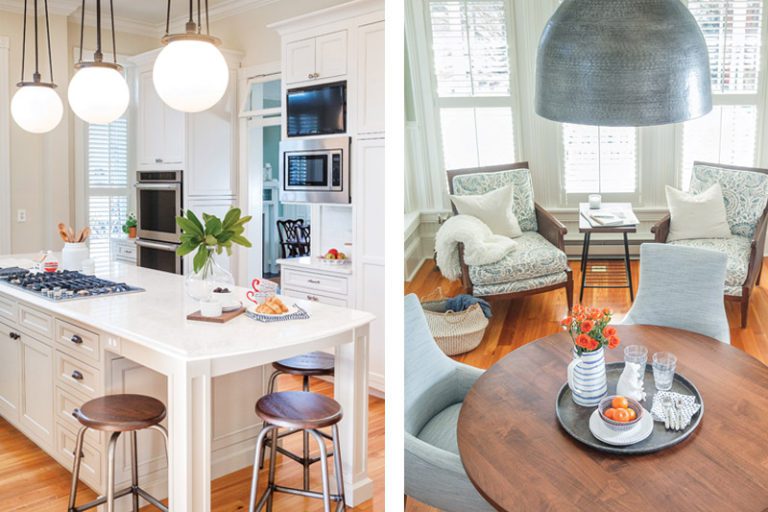 From the beginning of the design process, the Smiths wanted the kitchen-sunroom spaces to “retain some of the historic character of the home and mirror architectural details in the new space.” Tuscan Blue Design recommended a timeless, transitional, style for the remodel—nothing fussy, but notes of Victorian details. As walls came down, interior architectural details were reproduced throughout the spaces. The wall that hides the refrigerator is paneled-in custom beadboard to match the walls in the sunroom. Handmade glazed subway tiles, marble-look counter tops and simple cabinet doors combine to create a classic style for the space. New pine floors milled to pair with the existing wood floors replace layers of old linoleum. Even the cabinet hardware has a vintage feel, a nod to the original style of the home.

Victorian spaces are known to be dark and dim, lacking natural light. By removing sections of interior walls, the tall exterior windows wash the kitchen-sunroom spaces in natural light, giving the areas a charming and welcoming feeling. Pendant and undercabinet lighting provide much-needed task lighting. “I thought long and hard about the pendant light selection for over the island,” says Ericksen. “With the 12-foot ceilings, I wanted to fill the empty space over the kitchen island, but I didn’t want the fixtures to feel overwhelming or block the windows. In the end I think the tall vintage-style pendants add to the ambiance of the space and create a true focal point.”

Another design goal was to banish clutter. Good planning started with Susan, who made a comprehensive list of items to store in the kitchen. Large drawers in the island hold the majority of everyday dishes keeping them within reach. Tuscan Blue decided to maximize storage in the butler’s pantry. Shallow, tall cabinets fit between the windows and are perfect for pantry items, and they look good. A wet bar is tucked in an old chimney space, creating a spot for an extra sink, a set of refrigerator drawers and a pull-out for dog food storage. With everything tucked behind doors and drawers, the kitchen has a classically seamless look. 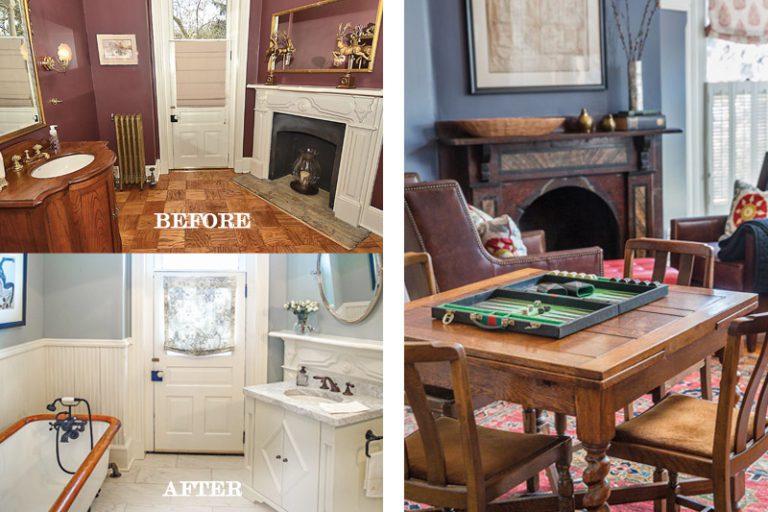 As the kitchen renovation progressed, the Smiths asked Ericksen to help them infuse a bit of their personality into the front rooms of the house. Tuscan Blue decorated the two front parlors and consulted on the remodel of the powder room.

One of the front parlors was transformed into a cozy library/game room. In designing this space, Tuscan Blue took a similar approach to the design in the kitchen—classic style with a nod to the architectural details in the home. It’s nothing fancy, but the new pieces feel like they fit in the architecture of the room. The design inspiration came from the colors in one of the Smith’s antique rugs, warm reds and dark blue. The walls are now deep navy blue, a pair of comfy leather chairs sit by the fireplace, pretty roman shades fill the bay window and a custom library cabinet sits along an empty wall. Ericksen’s favorite detail in the space? Hanging one of the Smiths’ paintings in the library cabinet to create a focal point.

The finished project was one that captured the Smiths’ goal of creating more functional, visually pleasing spaces, while preserving the historic charm of the 1895 home.

Meredith Ericksen is the owner and principal designer at Tuscan Blue Design. With more than 20 years of design experience combined with art training, she leads the team at Tuscan Blue with an eye for multiple design perspectives and an excitement for unique challenges. Find out more at www.tuscanbluedesign.com. For more information about the building contractor on this project, James Irvine Construction, go to www.irvineconstruction.com.

Peg and David Gamse’s journey to Frederick started with a list.

They were high school sweethearts who married in 1971. They moved to the Washington, D.C., area from their native St. Petersburg, Fla., in 1974, so David, a gerontologist, could intern at AARP headquarters. Apart from a year of living in Hackensack, N.J., while David worked in Manhattan, they had been Northern Virginians since.

“We loved Virginia,” says Peg. “We loved all of the things to do and the amazing educational opportunities. We loved its many parks … and, of course, we cherish the fond memories of raising our two children there and watching them grow into the wonderful adults they are now, each with a remarkable spouse, beautiful home and devoted family.” 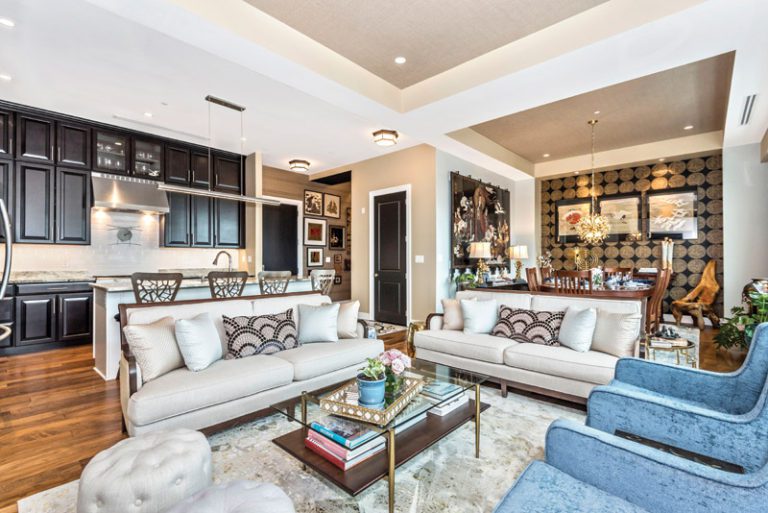 Peg, however, was rarely able to enjoy all the area had to offer. First, as a human resources director and then as an IT project manager with international companies, she traveled for work four or five days a week while dreaming of a life that would enable her to appreciate her home. David, on the other hand, knew that it was time to create a different kind of lifestyle that would serve them well in later life. “As the CEO of the Jewish Council for the Aging, I often speak publicly about how to age well,” he says. “Now that we are in our 60s, it’s time for us to practice what I preach.”

The couple made long lists—“We are big list makers,” says Peg—of what their “next-phase home” would be: affordable, low-maintenance, wheelchair-accessible (should that ever be needed), in a low-crime area and close to good healthcare and David’s work. It also had to be walkable to restaurants, cultural attractions and parks, and an easy commute to the children and a grandchild who live throughout the region—all in a relaxed and friendly area with good neighbors.

“Given our priorities, it’s no surprise that Frederick quickly moved to the top of the list,” says Peg, although she admitted “we looked everywhere, with one Realtor helping us in Virginia and another in Maryland.”

“We traveled to Frederick over and over again,” she says, “and enjoyed different restaurants each time. We especially loved the historic Downtown and the pride that everyone seemed to take in their community. It was a place where generations of families had lived and where newcomers wanted to stay for all their lives. But what made the sale was something David said as we were about to head back to Virginia from Frederick trip number 3. He said, ‘You know, this feels like home.’ I realized that he was right. I felt at home here, too.”

“The only downside,” says David, “is my commute to Rockville. It can take 90 minutes each way. Yet, that feeling of coming home has never wavered. After a long day … I think ‘home’ as soon as I see Frederick’s lights glowing in the distance.” And he’s even come up with a compromise solution for that commute. “Now, we’ve set up an office in the apartment,” he adds. He works from home at least one day a week. 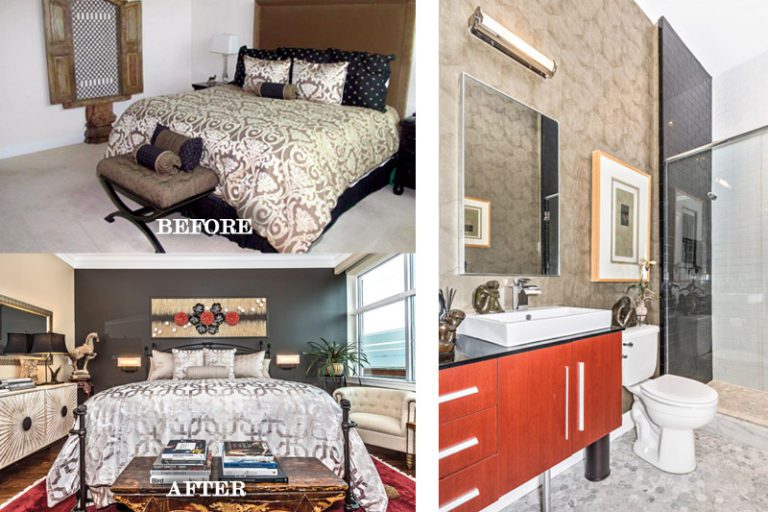 Long before moving day, the couple had approached their life-to-be with the same tools and rigor they used at work, ensuring to the extent that there would be no surprises. They searched online for Frederick interior design projects they liked (and the designers who created them) and found Jessica Underwood of JR Capital Build. “We absolutely loved what we saw,” says Peg, “and we quickly came to admire Jessica as a person. In addition, it was delightful to learn that she would be a Frederick neighbor of ours.”

“The surprise, however, was how fast we came to depend on her design savvy,” says David. “Initially, we had simply wanted her to help us decide what furniture to take from our large home in Falls Church to our half-the-size condo in Frederick. And, of course, we wanted her help in deciding what would go where. But then she offered great ideas about draperies, lighting, painting and more, ultimately creating a design that integrated most of our furniture and art—bronzes, ceramic sculpture, carvings, lithographs and paintings. We had purchased some of that eclectic collection over the decades while traveling, and we are especially drawn to antiques from China and Japan. Others are heirlooms or came from the bronze art gallery that my father-in-law ran in Florida until the time of his death. Each piece is important to us, including some beautiful sculpture that Peg herself created, as well as a painting by our grandson, Davin, when he was 7 years old.”

He adds, “Jessica created a design that felt like us, not like a movie set or a hotel. Initially, that was my fear in working with a designer because we had never worked with one before.”

“So, here’s the irony,” says Peg. “We worked with a designer to help ensure there would be no surprises during the move, but then we got surprised at how good it felt to work with Jessica in creating our new home. With her help and help from the talented upholsterer, drapery maker, wallpaper hanger and other craftspeople she assembled, we selected and installed new lighting throughout the apartment, built a gas fireplace and painted or papered almost every wall. There was a lot of creative give-and-take with our designer/friend, but the result is what we expect will be our home for a long, long time.”

Jessica R. Underwood is the principal of JR Capital Build, a luxury design/build firm that focuses on one-of-a-kind architectural interiors, offering both consulting and turn-key services from initial design concept through the completion of construction. Find out more at jrcapitalrealestate.com.