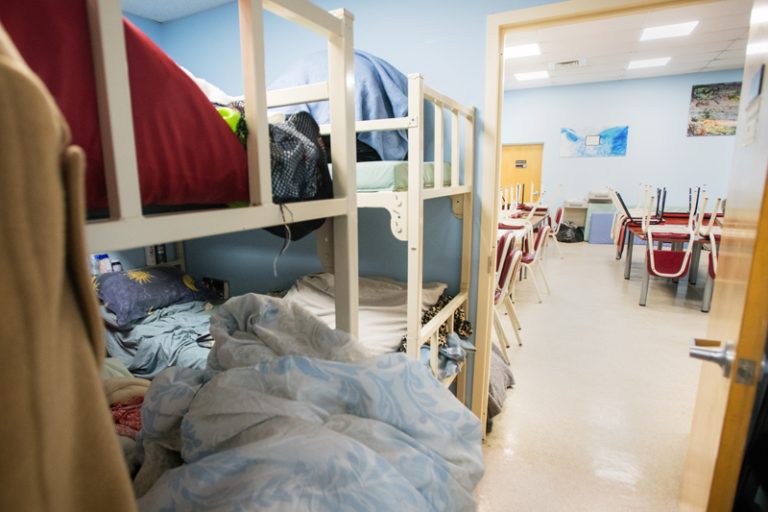 Despite the bitingly cold temperatures and gusting winds ripping through Frederick, Nick Felsh, 72, never stops counting his blessings: He’s been sober for more than a year, he’s made some friends at the Alan P. Linton Jr. Emergency Shelter, where he’s lived since last summer, and he has frequent phone conversations with his children who live out of state. “I mean it’s where I am now, so you have to make the best out of it. I choose to make something positive out of it,” Felsh explains.

Time has given Felsh perspective. Although he has a bachelor’s degree in accounting and has worked in corporate finance, his alcoholism eventually served him both personal and professional setbacks, including an estrangement from his wife. However, he is on a new path and is determined to make the most of what he’s learned and the wisdom he’s gained over the years.

“What brought me here was essentially alcoholism. I’ve now been off alcohol for a little over a year, which I’m proud of,” Felsh says. “My experience here at the shelter has been extremely good. Everyone is very helpful. People look to make your life as convenient as possible. It is a good place to be if you are recovering.”

The 80-bed Linton homeless shelter, where Felsh resides, is run by the Religious Coalition for Emergency Human Needs, an interfaith group that formed in 1981 to address the needs of local residents. The facility, which is the largest year-round shelter in Frederick County, is open to both men and women. When the shelter is at capacity, the coalition uses the Frederick Rescue Mission as an overflow for an additional 10 beds. Another shelter also managed by the coalition is for families and is currently decentralized and located inside houses of worship.

Nick Brown, coalition executive director, says the number of residents in both the individual and family shelters has risen during the past several years. He attributes this in part to the rising rents in Frederick County, but also to the rise in opioid addiction. The individual shelter currently has residents aged from 18 to 83 years old, with backgrounds ranging from young adults asked to leave their parents’ homes to those recovering from alcohol and drug addictions or dealing with behavioral and/or mental health issues.

“There’s been a significant increase in requests, from 59 applications in 2016 to 121 applicants in 2017,” says Brown, who took over as executive director last May although he’s worked at the shelter for nearly eight years. With the increase bringing the shelter to capacity, Brown says it’s important that his staff of 25 remain diligent and dedicated to meeting residents’ needs. “I make sure we are not warehousing people, where people become numbers, where we lose what we’re doing because it’s a job,” Brown says. “Folks consider this their home.”

Brown says the coalition also provides provisions to Frederick residents who are facing homelessness, including short-term subsidies, electricity payments, prescription help and dental benefits, in addition to job skills and financial literacy. “We help about 1,100 people a year,” Brown says. “We re-house those who have become homeless. We’ve got a very dedicated shelter [staff].”

To assist the homeless as they adjust to the shelter while searching for employment and permanent housing, staff members like Brenda Bell, assistant director of the shelter, and Dale Parkhurst, case manager, help residents fill out applications, prepare for job interviews and get treatment for drug or alcohol addictions. Each resident entering the shelter will undergo a background check and intake procedures. During the review, if a person is found to be on the sex offender registry, he or she is denied housing. Nearly everyone else is accepted, granted they follow the rules.

“I help them fill out applications, prepare for job interviews, keep them calm, safe and warm. We give them a nice warm shower and try to keep the hygiene up,” Bell says. “We’re here to find out how we can help.”

A few campsites remain around Frederick where some homeless choose to stay. Bell says she often checks on them when she gets off of work. “I’m a people person. Even after I leave work, I go check on folks to make sure they’re safe out in the woods,” Bell says. “A lot of them don’t like the rules [at the shelter] and want to stay put [in the camp].”

Parkhurst, an ordained minister, says he once walked in the same shoes as the residents he now supports as caseworker. “I was homeless once in Washington, D.C., in the 1970s. I slept in a park across from the White House,” he says. “We were considered bums back then. The park police pretty much left us alone.”

Parkhurst says he works hard to gain the residents’ trust. He listens to them as they vent their frustrations and celebrates with them when they get a job or find housing and move out of the shelter. He offers advice, and even prayer, when they ask. “Some of them come in and complain about the way they’ve been treated out in society, about being homeless and about being rejected. I try to encourage them to stop beating themselves up,” Parkhurst says. “I understand these people’s situations and have compassion.”

Felsh says he does a lot of volunteer work in the community. He has also learned to get involved at the shelter—doing a little cooking, vacuuming and the dishes—and to remain focused on where he is headed and not what he has been through. While it’s sometimes easier to focus on the obstacles, Felsh says doing good for others and staying active keeps his mind on the positive.

“The atmosphere, environment that you’re in, you helped to create,” Felsh says. “I made some friends I converse with on a daily basis. That’s a good thing to be able to share with people. Sometimes you have a real camaraderie.”

He also is trying to use his accounting background to get a job. “Being 72 years old, it’s not easy getting a job. No one wants to hire someone my age,” he says.

But Felsh is still applying and still pushing, a living testament to a sign that adorns a wall at the shelter. The quote is attributed to Babe Ruth and reads: “It’s hard to beat a person who never gives up.”