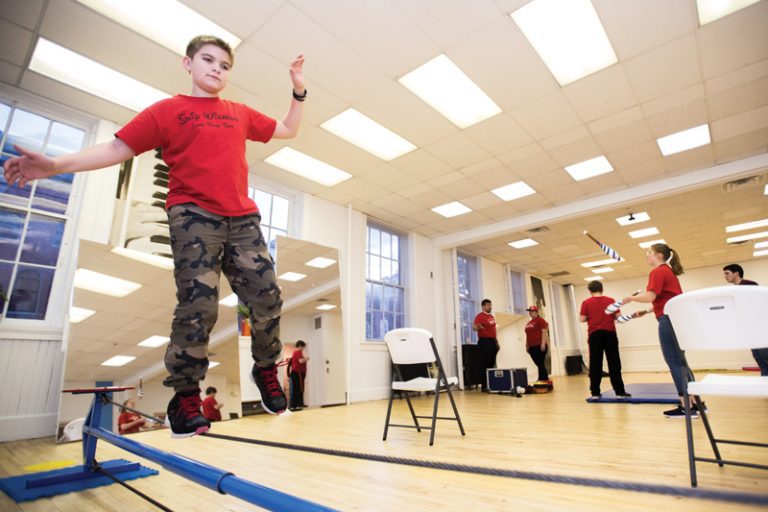 For nearly 70 years, the spacious brick building on the first block of East Church Street served as the central office for Frederick County Public Schools. But in its final years of use for the school system, the building was stretched to its seams. With offices tucked into corners and closets, the school system needed more room and moved its central offices to much more spacious offices on East Street.

Now, a different kind of education continues here. The nonprofit New Spire Arts has developed the first floor into a space for performing arts. Plans are to renovate the rest of the building for additional arts space, including the third-floor gym and auditorium, which once served the students of Girls High School.

Entering the building, there are reminders of its previous uses, but those are slowly being erased. Rooms are being opened and floors are being resurfaced. The historic, literally old-school look is returning, but with some gleaming new surfaces. There’s a large performing arts room with a new wood floor, which is being used for dance instruction, dance performances and musical performances. The expansive room fits 150 people comfortably.

“We’ve taken down a lot of walls,” says Austin Wilks, administrative support supervisor for New Spire Arts, a job he adds means “whatever needs to be done.” So far, 12 walls have been removed on the first floor.

On an impromptu tour of the building, Wilks cheerfully shows a visitor around. It now hosts classes and workshops for people of all ages, as well as a middle-school after-school program. Those who remember its days as offices for administrative and support staff for the school system will be surprised at how open, bright and airy the building is. “Our mission is trying to uphold the arts community and make sure everyone gets what they need,” Wilks says.

New Spire Arts opened in June, thanks to support from the Ausherman Family Foundation. Since then, the first-floor walls have been painted. Besides the new hardwood floor, a second performance room has new carpeting. The new rooms reveal the large old windows from the building’s days as Girls High School.

New Spire Arts aims to become a cutting-edge performing arts hub for Frederick. The building is owned by Frederick developer Marvin Ausherman and it was the Ausherman Family Foundation that provided seed money to start the nonprofit. Classes, workshops and the middle-school program are already providing space for music, dance and theater instruction and performances. Most classes are in 12-week increments, although there are shorter-term classes and workshops.

“Our goal is to engage the residents of Frederick County with the arts,” says Grace Cassuto, marketing assistant. With space for adult music and dance lessons, a planned theater space in the old McCrory’s building on West Patrick Street and school-age arts programs, New Spire Arts wants to fill in the gaps in local arts offerings.

“We’re trying not to duplicate programs in the community,” says Daniel Singh, the center’s new executive director, who started in the fall. Singh comes to New Spire Arts from a nonprofit dance company he established in Washington in 2002.

“There are programs for people who consider themselves artists,” Cassuto says. “But we are welcoming people to learn skills they might not already have. People think of their kids taking lessons, but they don’t seem to think of taking lessons themselves.”

Whether it’s adult-contemporary dance, beginning guitar, ballroom dance, Latin dance for middle schoolers, circus classes for kids, dance-inspired yoga, beginning ballet for adults or slam poetry for middle- and high-school students, there’s a program for the artist in nearly all of us. And yet, the intent is not to compete with commercial classes, but to supplement them.

The two largest rooms will also be rented out as event space. The second and third floors of the East Church Street building will be renovated after the renovations are complete on the McCrory’s building, which also once housed Frederick’s Cultural Arts Center.

That theater space for plays and art house movies is expected to open in August. The $800,000 project is being funded with grants from the Ausherman Family Foundation, the state of Maryland and PNC Bank. The space will also be available for events.

The East Church Street building also has room for theater. On the first floor, there is workshop space and a small performance space. Julian Lazarus, director of education, says plans are to offer podcasting and a professional recording studio as well as performance space for young people. A lounge provides space for parents to wait.

But on the third floor is a hidden gem. Plans are to update it after the McCrory’s project is complete. A beautiful old stage and gym occupy much of the upper story. This space still bears the wooden stage where female students performed, as well as the wooden gym floor complete with lines painted for long-ago basketball games. The original high, gabled, wood-beamed ceiling remains. Even the hooks where students once hung their coats remain. “We’re going to keep as much of the original as we can,” Singh says.

Lazarus, a former drama and dance teacher at Linganore High School, is looking forward to the opening of the new studio theater this summer. “It’s not the same size as the Weinberg [Center for the Arts],” he says. “It’s a niche space. We’re a presenting organization, not a producing organization.” The only original material he expects the center to produce will be attached to the education program.

The McCrory’s space will expand upon the theater space used by the Cultural Arts Center. Soundproof walls will also allow live bands to play in one wing of the building. The original brick walls are exposed and the building’s original industrial look will be preserved as much as possible, Lazarus says.

The theater will have state-of-the-art acoustics, and entrances will be situated so light does not spill in during performances. The main lobby will have a bar that can be rolled aside during family and children’s events. There will also be a coffee bar and a movie screen that will show art house favorites.

“It’s a great thing for Frederick,” says Louise Kennelly, executive director of the Frederick Arts Council. “The renovation of two important pieces of property is a significant investment. The executive director is fantastic. He has a very strong track record.”

The community will benefit as the art center grows. “It will energize the arts community,” she says. “It’s exciting.”

Find out more about New Spire Arts at http://newspirearts.org.