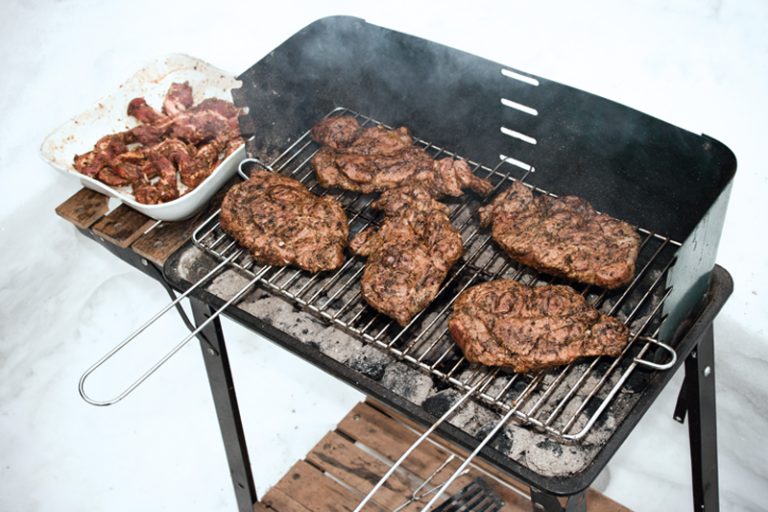 Take that Cover off the Grill For Winter Outdoor Cooking

Mention barbeque and folks tend to imagine poolside parties in August. This time of year, most grills stand in stark hibernation, forgotten while colder weather squalls, but not all. For intrepid cooks who crave the tasty kiss of smoke and flame on food, winter means trading bathing suits and flip flops for coats and snow boots. They carry on, in spite of the calendar and the wardrobe change, knowing it’s all about the plate.

A Weber GrillWatch survey reveals that 53 percent of American grill owners use their cookers all year long, with 10 percent grilling even when temperatures dip into the “why does the air hurt my face” zone. Eric Forrester is one of those dedicated few. He started restaurant work at 14, progressing to opening sites for General Mills restaurants (such as Olive Garden and Red Lobster locations) before “escaping” into construction equipment fabrication and metal finishing. Those disparate paths converged when he became COO of Blue Ridge Mountain Cookery. The company makes high-end catering grills for the military, restaurants, rental and universities. From there, friend Chris Carter, of CarterQue BBQ & Grilling Co. in Mount Airy, introduced him to the competition barbecue circuit and something clicked. Forrester toured for several years with a team called Smoked Encounters of the 3rd Swine before the serial entrepreneur decided to open a barbecue supply store. He started Mason-Dixon BBQ Supply and Services in Greencastle, Pa., in 2007.

Maryland fans lobbied for a second location, which opened on Monocacy Boulevard in Frederick in 2014. Both shops are loaded with shelves of sauces and rubs created by nationwide competition barbecue crews. Forrester says, “We carry about 400 different brands. … I can normally tell customers what competitions they’ve been in and how they’ve ranked.” Staff are caterers and pitmasters, too. They readily chat with customers about everything BBQ, from a seasoning’s provenance and regional flavor profile to cooker comparisons and recipe ideas, even which wood smoke pairs best with a particular dish.

Forrester says he’s not a snob about fuel type—wood, charcoal or gas—but, no matter the choice, expect to burn more of it during cold weather. Food may take longer to cook, too. The best hedge is to give the grill adequate time to heat before putting on the vittles, up to 20 minutes. Forrester confirms that you don’t need a different grill, but, “in winter you want an insulated piece of equipment that will hold and maintain heat, regardless of outside temperatures.” Some light-weight, single-walled grills and smokers benefit by adding a thermal blanket. (Check manufacturer specs for compatibility.) “Digital controls are helpful, too.”

Bailey Carbaugh works at Mason-Dixon BBQ’s Frederick shop and is a fan of Big Green Egg charcoal grills for their legendary cold weather performance. He says, “I can cook a steak at 700 degrees in four minutes on mine.” Big Green Eggs use the same insulating ceramic as NASA. The Atlanta-based brand has a cult-like following among devotees, who post pictures of their snow-bound cooking escapades. The “Egg” is based on the Kamodo, an ancient Japanese cooking vessel, which works akin to India’s clay tandoori ovens. The shop also carries Green Mountain pellet grills, Meadow Creek cookers/smokers and the full line of Weber smokers and charcoal grills.

High-heat options prompt another caution: the cooker will be, well, hot. It’s easy to forget that when everything else is freezing. Wear appropriate, non-flammable gloves or oven mitts and never check the grate with bare hands. Keep sleeves and scarves secured away from flames. And, while a windbreak is helpful in blustery weather, don’t be tempted to fire up the grill in your garage or in a tent. Better to wait for milder breezes than suffer toxic fumes or char your home to a crisp.

It wouldn’t hurt to throw some salt on the walkway either. As Forrester notes, “Most accidents associated with wintertime grilling have more to do with getting to and from the house than with the actual grill.”

What’s the biggest surprise for newbies? Baking, according to Forrester. He expounds, “You can bake, more than you’d ever believe … casseroles, cheese-cake. … More pizzas are cooked on Big Green Eggs than meat.” Whole, roasted turkey is popular, too, especially with digital pellet cookers. Forrester and crew are inspired by friends who rarely use their indoor ovens. They spread the good word with cookie baking demos and free mini classes at both locations.

About 45 people showed up for a November “Show & Go.” Forrester cold-smoked nuts, cheeses and salmon, highlighting seasoning options. Another session featured a guest presenter from the Steak Cookoff Association. “People are amazed,” says Forrester, a firm believer in hands-on learning. His company offers nine intensive “Bootcamp” programs over the summer. There are three classes on ribs and chicken; three on brisket; two on pork and whole hog cooking; and a “Turkey and Tailgate” class toward fall. Participants share samples and results at day’s end. Last year, five camps sold out before March.

During notoriously fickle spring weather, Mason-Dixon BBQ’s Green-castle store hosts its annual barbecue competition, The Ironman. Sixty-plus regional and Canadian teams compete, sans electricity, through whatever Mother Nature throws at them. The event always has a charitable component but the public can check it out for free.

Between now and then, if you dream of intoxicatingly perfumed smoke curling around juicy, lightly charred meats and caramelized veggies, that’s the grill calling. Listen, and you might just find the warmth of pride in a meal worth savoring.