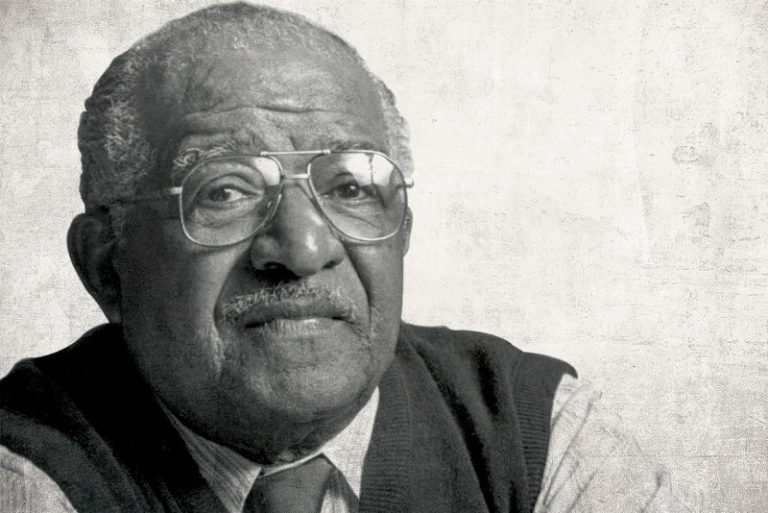 Google “civil rights leaders in Frederick, Maryland” and articles and references to Lord Nickens will be among the top entries. Last month marked the fifth anniversary of his death, but to family, friends and those with whom he worked, his impact is still being felt. Nickens experienced firsthand sweeping societal change in his 99 years. He went from being kicked by a train engineer as a 6-year-old boy for entering a “white” restroom to having a street named after him in Downtown Frederick. He fought in World War II and, upon returning home, continued the fight for civil rights, inclusiveness and dignity for all Frederick County citizens.

Nicken’s niece, Jacquelyn Bowins, remembers hearing about the train incident and about her uncle’s disillusionment with the disparate treatment he felt at home and abroad in the military. She also remembers his strong sense of family and his desire to instill pride into her generation. “Family reunions were an educational kind of time. He would school us on our family history,” she says. Bowins, who worked at the Community Action Agency Anti-Poverty Program currently lives on East All Saints Street. She grew up in Frederick in segregated schools and neighborhoods. “There were quite a few restrictions on black kids,” she says. She credits her uncle with inspiring her to reach for more and to help her community. “That’s where I get my courage from. You have to push for what you want.”

“DIDN’T BACK DOWN FROM AN ARGUMENT”

Lord Nickens was the son of a former slave. Born in 1913 in White Post, Va., he would see tumultuous cultural change in his lifetime. But he was not merely a witness to racial integration, he actively knocked down barriers to it. He worked until his retirement as a laboratory technician at Fort Detrick and he spent his adult life working with the Frederick County chapter of the NAACP, serving as its president for more than 20 years. Over those years he took up many causes and projects and his colleagues point to his significant achievements is the areas of fair and affordable housing, employment, education and standing up to and legally squelching Ku Klux Klan activity in the county.

One might regard Nickens as revolutionary since he spearheaded, at the local level, many of the societal changes that occurred in the 1950s, ’60s and ’70s. But attorney Willie Mahone, current president of the Frederick County NAACP who provided legal counsel to Nickens and others at the organization, says, “Mr. Nickens saw himself as a citizen, a member of the republic, an integral part of the system.”

Seaven Gordon worked alongside Nickens for decades, serving as the vice president of the NAACP during Nickens’ tenure as president. In the early 1970s they petitioned the city to conduct a survey of substandard housing and urged elected officials to respond to the need for better code enforcement. They also worked with city and county officials to build and maintain affordable housing and to curtail displacement of long-time residents. “We worked on several different projects. Segregation was at its height. Housing and employment were the biggest [objectives],” Gordon says.

Gordon has amassed two scrapbooks full of letters, event programs and newspaper clippings highlighting the work that he, Nickens and other community activists completed over the years. Beyond the decades devoted to holding the city and county accountable for safe, affordable and equal housing, he proudly points to their successful efforts to recruit minorities to work at the local post office. They also routinely tested access to public accommodations such as parks, restaurants and bars. 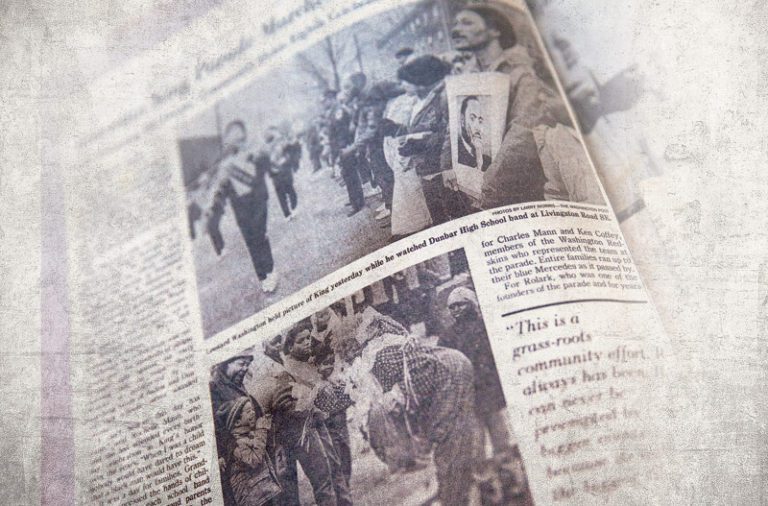 The most dramatic headlines in his scrapbooks describe their challenges to the county for issuing permits to the Ku Klux Klan to hold rallies. Mahone sued the county with Nickens as the plaintiff. His winning argument: the rallies were restricted “whites only” events, not a function for which the county should issue a permit.

Gordon and Nickens showed up at a Klan rally to prove their point. “The Klan was holding rallies almost on a weekly basis. We would have counter-rallies at Asbury United Methodist Church,” he says. “There was a big rally out at Rocky Ridge. A group of us went. We asked to come in and were turned away,” Gordon says.

Bowins, Nickens’ niece, also remembers hearing about Klan members walking down West All Saints Street looking for Nickens. “He and his wife were under Maryland State Police guard for some time,” Bowins says.

According to Gordon, Nickens fearlessly asserted his rights, often in the face of danger. “He didn’t back down from an argument. He knew he was right and he insisted on his rights,” Gordon says.

Mahone recalls many more issues he and Nickens addressed together through legal means. In addition to insisting on enforcement of housing laws, they encouraged the recruiting of African-Americans in the Frederick Police Department, Frederick County Public Schools and in city government. They also supported the awarding of contracts to minority-owned businesses. He says he believes the city can make better use of the Disadvantaged Business Enterprise program and he will look to ensure opportunities for minorities in the construction and running of the planned Downtown hotel and conference center. Mahone says the NAACP will look to work with the city and the county in the coming years. But, when discussing minority representation on boards and commissions, including the Board of Aldermen, he cautions, “Focus not so much on what they say as what they do. The proof is in the pudding.”

David Key says he is proud to have known Nickens both as a longtime citizen of Frederick and in his capacity as the president of the African-American Resources of Culture and History (AARCH) Society. His organization has developed a self-guided walking tour of Frederick, featuring historical landmarks and other items of interest, and is currently working on creating a heritage center in the Downtown area. The center will feature exhibits, photos, films and artifacts, but will also be a place to facilitate conversation. “Frederick is a much different place than it used to be, and it can be a model city for what can be,” says Key.

He notes that while significant change has taken place, he is keenly aware of errors of omission and covert racism that pervade the culture. He cited this unconscious bias in a recent newspaper article about Baker Park. He took exception to the article’s assertion that the park has been a community gathering place for the past 90 years. “This was not true for me,” he says. Key pointed out that Baker Park was segregated for many years and that the city constructed Mullinix Park near Bentz Street as a place for African-Americans in an effort to maintain segregation. He says he had often heard the story of how a teenage Lord Nickens had been arrested and fined for walking through Baker Park. That story is also chronicled by local author Joy Hall Onley in her 1995 book Memories of Frederick Over on the Other Side. In the book, Nickens is quoted as saying his arrest for walking through the park, at age 19, earned him a $2.50 fine.

Key says there is a tendency to look at significant changes Nickens and other Civil Rights leaders fought for and downplay the work that still needs to be done. “Racial issues and inequality. We don’t see it until it raises its ugly head. Charlottesville was an example of that,” says Key, referring to the demonstrations last year by white supremacists in Charlottesville, Va., over the planned removal of a Confederate statue.

Key asserts that Nickens was a major force for change in Frederick. “He had a tremendous impact,” he says. He looks to Nickens’ example of standing up to injustice as he goes about the work of his organization to facilitate an understanding of the past, enrich the present and build a more inclusive future for all citizens. He recognizes that there is still much to be done to eliminate negative attitudes and behaviors based on race. “We experience it all the time. It is not so overt. It’s an unconscious bias. When people do things unknowingly you can point that out, but it is a delicate balance. They don’t understand that it is a bias. AARCH wants to work on that.” 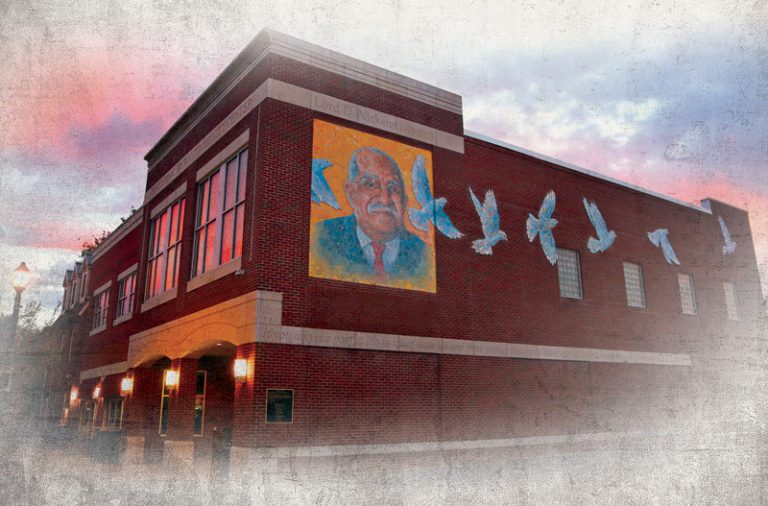 Lord Nickens Street connects Bentz Street with North Market Street in Downtown Frederick. It is a testament to his life’s work of fostering equality and inclusiveness. As the years pass by, his name and his work remain at the forefront of civil rights accomplishments and current advocates draw new strength from his tenacious nature. Mahone cites the removal of the bust of Roger Brooke Taney in front of city hall last year as a victory that was a long time in the making. “That was something,” he says. “I dealt with that for 20-plus years.”

Challenges remain, but newly elected city Alderman Roger Wilson is approaching 2018 with confidence and hope. He says he draws upon the legacy of Nickens, whom he met upon moving to Frederick 20 years ago.

“Mr. Nickens cared about the ‘others’ in the community and fought for what was right when it was uncomfortable to do so. He is the essence of service above self. Mr. Nickens’ legacy lives on through the next generation of community leaders. His vision to build a Frederick community where all people would have access to affordable and unrestricted housing back in the ’50s was remarkable. For the next generation of community leaders, affordable housing remains an important issue for our seniors who are downsizing and for younger people who are just starting life’s journey. We owe a tremendous gratitude to Mr. Nickens for getting us moving forward,” says Wilson. “I am standing on the shoulders of Mr. Nickens’ legacy and will continue the fight for what is right and hopefully leave the community better than what I found—that is my commitment.”

It is doubtful that Lord Nickens ever Googled his own name. But on the internet, in Seaven Gordon’s scrapbooks and in the memories of his friends and colleagues, his name comes out on top.