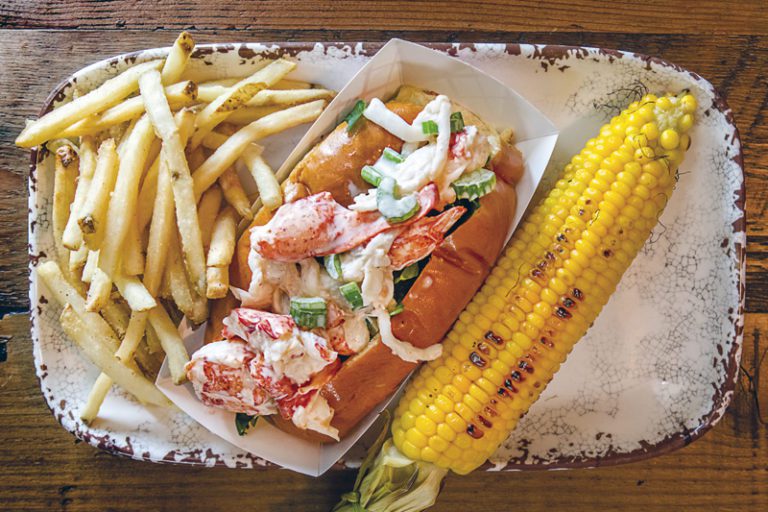 Maryland and Southern Seafood Reels in the Fans at Ragin’ Reef

Marylanders are passionate about the state’s hallmark crab cakes, demanding that each mound of crustacean love be meticulously crafted, with due respect. Diners expect plump, sweet morsels of delicate blue crab to dominate each bite. The prized meat should be gently kissed with seasoning and just enough crumb to bind it together. At the best, they are lightly golden at the edges, redolent of salty seas, with a slight spring to the chew and a burst of sweet-savory flavor. If the dish turns up looking like a little brown hockey puck with the texture of Thanksgiving stuffing, duck. They might just throw it back.

Steve Deffinbaugh understands. He’s a seafood aficionado with Maryland roots and co-owner of Ragin’ Reef, one of Frederick’s newest restaurants. Deffinbaugh started working for an aunt and uncle who owned Fred & Harry’s in Silver Spring, which opened in 1947. He bused tables and washed dishes before advancing to line cook. “I learned to cook from my cousin,” he says. The experience inspired him to get a culinary arts degree from Johnson & Wales University. In 1994, he landed a job with the Cheesecake Factory; he traveled the country for a few years, opening new locations for the chain. It was good practice for starting his first venture, Nantucket’s Reef in Rockville in September 2013.

Future business partner Jonathan Bostin met Deffinbaugh while Nantucket’s Reef was under construction. Bostin waited tables at a nearby eatery where Deffinbaugh was a regular. Impressed by the 22-year-old’s professionalism, Deffinbaugh told Bostin, “You’ve just given me the best service I’ve ever had, and I eat out every single night.”

Bostin soon became head server at Nantucket’s Reef, progressing to general manager and saving enough money to invest in Deffinbaugh’s second venture, Ragin’ Reef. Both restaurants cultivate a sleek-but-casual atmosphere, somewhere in between fine dining and a beach shack. “We want people to be comfortable coming in to eat, whether they are in a three-piece suit or in shorts and flip-flops,” says Deffinbaugh.

The site has ample free parking in front and back, with entrances at each end of a long dining room. The space is decorated in steely blue and silver corrugated metal against marble and distressed wood. Currently, there are tables for 50 guests. Seats fill quickly during peak hours, so reservations are encouraged.

CATCH OF THE DAY

Bostin and Deffinbaugh work with several suppliers to obtain the highest quality seafood available, including briny Texas supreme Gulf shrimp, which star in spicy tacos and chorizo-spiked “wicked” shrimp pasta. Deffinbaugh says the fried shrimp basket is his go-to lunch and laughs boomingly, “I got shrimp juice flowing through my veins from way back when, from all the shrimp I peeled over the years.”  He’s a gregarious host with recipe ideas lined up for tuna or grouper, halibut, trout, mahi-mahi and Chilean sea bass, pending freshness, availability and price. Dinners range from $9 for a burger plate and $15 for the chicken pecan salad to $26 for a petite filet. Deffinbaugh emphasizes, “We’re not the cheap guy, but we are reasonably priced compared to the quality of products we are serving.”

The most popular dishes ordered are the crab “no-cakes” as platters ($19/$29) or sandwiches ($19) and the luscious lobster spinach queso appetizer ($9). Deffinbaugh beams, “People tell me, ‘We no longer have to drive to Baltimore. We can come in here and get a real Maryland crab cake.” He perfected the recipe by cooking variations for his parents who live in Frederick. Nantucket’s Reef’s well-liked stuffed baked cod with crabmeat makes an appearance, too, as does a new coconut/pecan-crusted tilapia that’s served with a habanero-mango sauce and pineapple salsa. Ragin’ Reef’s $10.99 lunch portions, such as the oyster roll or herb-roasted chicken with crispy thin-cut fries, include a fountain drink. Happy Hour is Monday through Friday from 3 p.m. to 7 p.m., or indulge on “Shuckin Sundays” with $1 oysters all day.

Special requests are easier for the small staff to accommodate at off hours, but Bostin notes that seafood is naturally gluten-free. “I’ve done lobster and crab with a light lemony mayo and a little bit of Old Bay that came out pretty well. It was similar to crab Imperial.”

Ragin’ Reef’s brunch runs Saturday and Sunday from 10 a.m. until 2 p.m. It’s an à la carte menu with an option to add a bloody Mary or mimosa for $2. Menu highlights range from savory omelets and scrambles with breakfast potatoes to sweet indulgences such as crispy fried French toast or aromatic cinnamon-chip pancakes. The crab cake Benedict pairs delicately poached eggs with chorizo sausage, shrimp and a Cajun cream hollandaise. Grilled shrimp over creamy grits is another nod to the restaurant’s southern influence.

It’s worth saving room for, or bringing a couple friends to share, Ragin’ Reef’s signature bread pudding. It’s gooey and chewy, moist and golden, with a dollop of vanilla ice cream and drizzled caramel.

Deffinbaugh and Bostin are touched by their warm welcome into the community and have plans to double the restaurant’s seating by next month, in time for Valentine’s Day. When warmer weather rolls around, the duo will add a dozen or so outdoor tables surrounded by greenery-covered trellises and flowering planters. There’s even another location on their radar. “It’s a lot of work being in this business,” says Deffinbaugh, “but it makes it all worthwhile when we see people who are as excited about our food as we are. There is nothing better than that.”