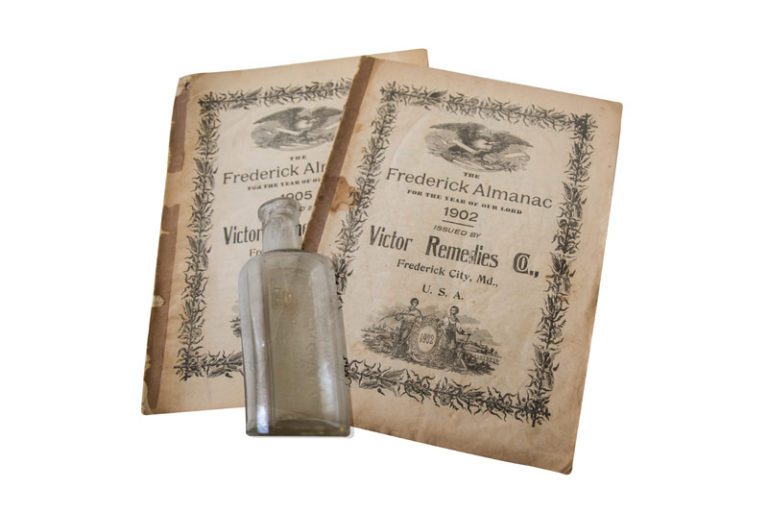 It’s literally a pain that a cure for the common cold has yet to be invented, but it’s fun to see how people used to relieve the symptoms.

Before the Food and Drug Act was enacted in 1906, it was virtually a free-for-all as to what people could manufacture, promote and sell as a cold or flu remedy. Until then, the quality of the advertising, not necessarily the contents of the product, made a medicine a commercial success.

The Victor Remedies Company operated at 6 N. East St. in Frederick. Medicines produced there included Victor Infants Relief. According to the paper label—long since gone here—the product contained cannabis indica, sweet spirit of nitre and chloroform, and was used to treat diarrhea. While the ingredients were common in many medicines preceding 1906, they are considered controversial, and, in some cases, illegal and toxic today.

According to the 1905 Frederick Almanac, which the company also issued, the formula was developed by Dr. Peter D. Fahrney, an 1867 graduate of the Philadelphia University of Medicine and Surgery. Dr. Fahrney lived in Chicago, Ill., and marketed patent medicines across the country. He was the grandson of Dr. Peter Fahrney, who practiced medicine in Boonsboro.

While today’s medications are often kept in plastic and have child-proofed caps, this bottle is glass and originally had a cork stopper. Words embossed on the glass read, “VICTOR INFANTS RELIEF/VICTOR REMEDIESCO /FREDERICK, MD.” Marcia A. Hall donated this bottle to Heritage Frederick in 2004.