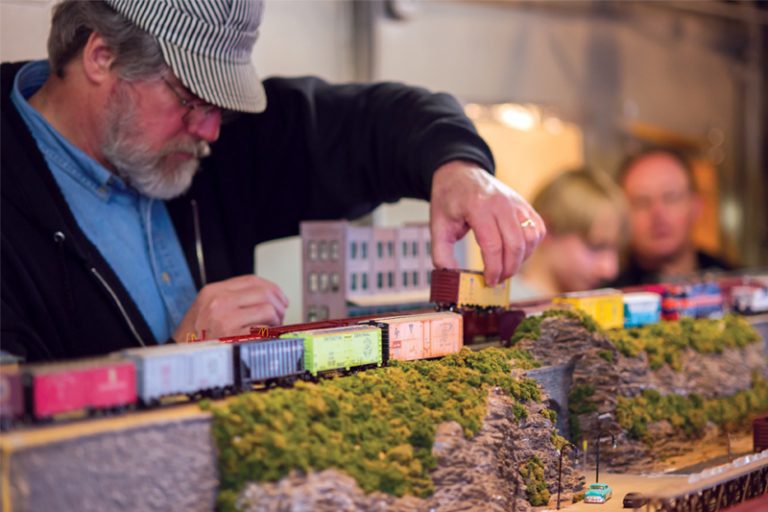 Growing up in Pennsylvania’s Lehigh Valley, Tom Schweikert would often see a train, a railroad crossing or track, no matter where he went. And while some people would bristle at the inconvenience of being stopped at a rail crossing, Schweikert relished the opportunity to see a train moving along the track.

His love for the railroad extended beyond the large diesel and steam engines. “I was always anxious at Christmas every year to go to my uncle’s house and see his [model] trains,” he recalls. His uncle would move the dining room table and chairs to create a large holiday display spanning two rooms with an American Flyer engine and train cars.

At about the age of 12, Schweikert would do chores at his father’s beer distributor business, which was right next to a hardware store that sold HO-scale model train kits. When he wasn’t needed to work for his father, he would buy a kit and build a train.

Before heading off to college, Schweikert gave his trains to his brothers and didn’t think about the hobby until the late 1990s when a friend, who was building a home layout, asked him to come to a model railroad show in Timonium. Knowing Schweikert’s interest in technology, the friend said model railroads could now be run by computers. Schweikert went to see for himself and became hooked again.

When Schweikert was looking at the designs to build a home in Spring Ridge, he made sure half of the basement would be devoted to a computerized, HO-scale train and digital control layout he would build himself. A now-retired engineer, Schweikert had the technology part down but needed help on how to create scenery, like making realistic rocks out of plaster and foam. Needing expert opinions, he decided to join the Frederick County Society of Model Engineers.

Founded in 1966 by four train hobbyists, the Society of Model Engineers currently has about 25 members with 12 to 15 that are active. The group meets on Wednesday nights, the first week of the month at a member’s house for a business meeting to pay bills and discuss replacing and buying equipment. The remaining meetings are hosted at the organization’s historic 70-foot, six-door Chesapeake and Ohio horse car located just off East Patrick Street by Carroll Creek. Members use the time to make improvements to the indoor 56-foot HO and HOn3 layout and an outdoor G-scale layout, and to run their own equipment if they do not have a layout at home.

On a recent fall evening, members were milling about the car making repairs, including improving a wood mill scene, adding an additional backdrop and working on the engines, which can be quite temperamental. Club president Bill Trout says members play with programming to get the effects that they want, such as realistic motion, sound and everything in between. “The manufacturers have gotten pretty good at it, but there is still tweaking that needs to be done,” Trout says. Bringing out his phone, he uses the app WiThrottle to operate 28 different functions like a model horn or bell.

Outside, in the dark, members work to clear debris from their G-scale display. “That is hands-and-knees kind of work,” Trout says. “You are at the mercy of the weather,” noting they clear off leaves, cut grass and shovel snow to keep the layout operational. “They almost always are out there with an emery cloth to clean the top of the rail for the current to flow. There is no good tool out there yet to do that, so you have to be very careful and pay attention to what you are doing. … [The layouts are] never really finished. They always need something.”

Besides a love for the hobby, the members are working hard for their annual open house set for every Sunday in January and the first Sunday in February from 1 to 4 p.m. The winter dates are scheduled because trains are a part of the holiday season and many people have small layouts around their trees. The event “gets [people] out of the house,” Trout says. “It’s something different.”

A Germantown resident, Trout grew up in Pittsburgh, living next door to a train engineer who had a layout in his home. He later moved to Maryland to work at the National Institutes of Health where a colleague would get him involved in a Washington, D.C.-based train club that later moved to Hagerstown. He joined the Frederick organization in 2008 after a member convinced him to be a part of both groups. “A lot of us have office jobs. It’s not like working with your hands,” he says. “[This organization is] a remote way of working with your hands.”

Trout owns about 100 HO engines, mostly Baltimore and Ohio and Santa Fe lines, which he admits may be getting a bit overwhelming. “Well it’s not an addiction, but it is hard to stop,” he jokes. “You see something you like, you want another one. That is where I get caught up.”

Thurmont resident Tom Fedor joined the model train organization in 1998 after moving to the area. “I felt that I could contribute some of my skills to the group and enjoy working with my trains.”

Fedor has no idea how he first came to love trains. “It’s just something that has always been a part of me,” he says. “It’s always been in me. I’ve always liked trains. I was thrilled by the real ones. There is just something intriguing about model trains and railroading.” Having grown up in the Finger Lakes region of New York, he’s focused his HO collection of 30 or so freight cars and eight engines on the New York Central Railroad during the late 1940s to early 1950s timeframe. “There are a whole lot of different parts to this hobby,” he says. “A lot of ways to enjoy it.”

On meeting nights, he will often be found adding details to the scenery, such as building rock walls, and helping to remodel the railroad yard. “I think that’s why we all do this,” he says. “We just have this passion inside us for trains and model trains and railroading. It is a lot of fun. Our open houses just give us an opportunity to share this with people who are new to the hobby. It’s a lot of fun to encourage them.”