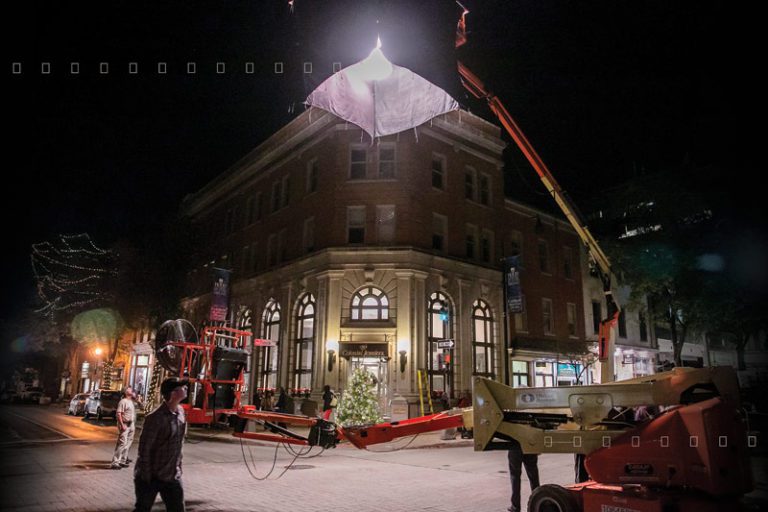 Frederick is dressed in holiday trappings. Snow is falling and, in the background, a romantic holiday tune plays. Of course, this isn’t Frederick’s typical holiday look; rain, not snow, is more likely on Christmas. But it is ideal for this setting—a holiday-themed Maryland Lottery commercial.

Frederick is not exactly Hollywood’s go-to for location filming, but it’s a setting increasingly being used, especially in advertisements. In another ad, Downtown Frederick homes and businesses are easily recognized in a commercial about Medicare’s open enrollment, shot in late September.

To make these commercials, there are street closures and traffic detours, but for the most part, people seem to take filming in Frederick in stride, says city Police Department Capt. Dwight Sommers.

It’s a good problem to have.

“We feel like this is a great thing for Frederick that people want to film here,” says Donna Goff, economic development specialist for the City of Frederick.

In the past few months, three commercials have been filmed in Frederick. Besides the Medicare and lottery ads, another spot touts biodiesel. “The good thing about Frederick is they come up to shoot one thing and find more,” says Carl Glorioso, director of the Frederick Film Office. The mission of his office is to support, attract and promote film, TV and multimedia projects that benefit Frederick County.

Frederick’s urban feel, with its proximity to rural roads, made it ideal for the Maryland Lottery commercial, which will air through Christmas, says Lottery spokeswoman Carole Gentry. The commercial is advertising holiday scratch-off lottery tickets. In the background is a holiday song set to the melody of This Magic Moment.

The commercial actually opens with a rural road scene, filmed on Old National Pike near New Market. The late day, rural setting quickly fades, and then there is Frederick’s bright, cheerful Downtown, ready for the holidays.

“Frederick fit the bill,” Gentry says. Film crews didn’t have to travel too far from Baltimore, and the postcard-perfect holiday image was awaiting them. Starting around twilight one evening in early October, the Square Corner at Market and Patrick streets was transformed into a Christmas wonderland, complete with snow and twinkling lights.

“We have become their backlot.”

“We like projects where they stay overnight and purchase food,” says Richard Griffin, director of economic development for the City of Frederick. Frederick offers production teams a good experience. He calls these bread-and-butter projects, ones that bring a production team to Frederick for a day or two.

Frederick may also show up on television screens in disguise. Sirens Media, based in Silver Spring, often uses City Hall’s boardroom as a courtroom for cable television shows. City Hall, once a courthouse, makes an ideal setting for re-created courtroom scenes. “They don’t show Frederick, but they do utilize our facilities,” Griffin says. “They’re our most frequent user.”

Sirens Media produces shows about crime and investigation for cable networks that include Investigation Discovery, A&E, MSNBC and truTV. Occasionally, the front of City Hall may be included in a shot that will survive a film edit.

“We have become their backlot,” Glorioso says. Film crews from Sirens also use Frederick scenes as stand-ins for other locations. These are altered to look like somewhere else. “If they’re looking for the Golden Gate Bridge, they may use Frederick,” he says.

Many documentary, reality and nonfiction programming for Silver Spring-based Discovery and its sister channels are also filmed in Frederick. One of those was Capturing Oswald, shown on the Military Channel.

“We want to show what the benefits are.”

More film and commercial projects are expected to come Frederick’s way. “We’ve been bombarded in the last three months,” Goff says. “I don’t know if our name is getting out there or what.” The projects range from a student film in Baker Park to the lottery commercial. The city had been averaging 12 requests a year from film crews, but in the past three months alone, however, Goff has received six requests.

The city is reviewing its permitting process. Right now, road closure permits are $100, with another $75 fee paid to the city engineering department. Goff says the plan is to design permitting fees that are more in line with costs to the city.

But Frederick still wants to keep welcoming film crews. “We want to show what the benefits are,” Goff says. At the same time, the city doesn’t want to inconvenience residents. Most people are excited when they learn Frederick will be featured in any kind of film.

Anyone who remembers the 2003 Civil War movie Gods and Generals may remember the opening scene. About 30 seconds long, it shows a carriage clattering down a 19th-century thoroughfare. The U.S. Capitol is in the background. This scene was shot in front of Frederick City Hall, with the Capitol superimposed into the scene.

The historic Ross and Mathias houses are in plain sight. These grand old historic homes are located on Council Street next to City Hall. The Mathias house became a stand-in for Washington’s Blair House.

Then there was the 2012 movie Elf Man, shot in and around Frederick over several months. It’s a slapstick family holiday movie with scenes filmed in a farmhouse on Old Frederick Road and at Bushwaller’s restaurant. The movie had a gala premiere at the Weinberg Center for the Arts.

And there was the highly successful indie film The Blair Witch Project, a fictional story shot in the style of a documentary. It was filmed mostly in Montgomery County but a few legendary scenes were shot in Burkittsville.

“Maryland doesn’t have any film incentive money available,” Glorioso says. But it does have indie filmmakers, some of whom are drawn to Frederick’s scenery and vintage American architecture.

Fishbowl, now on the film festival circuit, is set in Howard County, but about one-third of the movie was filmed in and around Frederick, Glorioso says. Filmmakers Stephen and Alexa Kinigopoulos wanted to set the late-1990s family drama in their native Maryland.

“It’s an amazing film,” Glorioso says. Locals will recognize St. Joseph on Carrollton Manor Catholic Church near Adamstown, Trout’s Market in Woodsboro, The Cellar Door restaurant in Frederick and one of the city’s water towers.

“They wanted a classic Maryland town.”

The Maryland Lottery likes to get out of Baltimore and shoot commercials around the state. Frederick offered that perfect opportunity, Gentry said. Nearly 30 people worked in Frederick overnight to produce the holiday commercial.

“They wanted a classic Maryland town,” Gentry says. “Frederick is film-friendly, and the merchants are very welcoming.”

Company Films, another Los Angeles-based production company, was in charge of the Maryland Lottery commercial. Its Baltimore advertising agency was already interested in Frederick. “We did scout other places in Maryland, but the director really liked the look of Frederick,” Miller says.

Miller, a freelance independent producer and production manager, says it was a coincidence she was hired to be the production supervisor for both commercials being shot in Frederick. “In both cases, the town, Police Department, residents, business owners and the Department of Economic Development were very supportive and easy to work with.

They really made us feel welcome and helped both shoots go smoothly,” she says. “Frederick was a great alternative, and I have no doubt there will be more opportunities to shoot other commercials there, as well.”

“It brought out everyone’s holiday spirit.”

The Lottery commercial begins with a truck driving along Old National Pike near New Market. Filming was done using a small drone with a camera attached. That part of the shoot, near dusk, took a couple of hours. After it wrapped, the filming was moved to Downtown Frederick.

The all-night filming went well, according to Sommers, of the Frederick Police. He was on the scene until about midnight, although there were officers there all night. In all, 16 worked overtime hours. Sommers says he worked with the production crew to make the road closures as painless as possible.

He was also on hand to help with the Medicare commercial, which featured older people casually talking about this fall’s Medicare enrollment in daytime scenes throughout Downtown. “Our Downtown area is so beautiful, with homes and front porches and roadways and businesses,” Sommers says. “It’s inspiring other people to come here.”

The road closures for that were intermittent. Closing the Square Corner at the end of rush hour for the lottery filming was a bit more of a challenge, he says. But it wasn’t as bad as he expected. “I was pleasantly surprised. It brought out everyone’s holiday spirit. It was a great atmosphere, really spectacular.”

There were many curious onlookers to see the intersection covered with snow, with no traffic. “This was one of the best-run events [in] Downtown, especially for the disruption it caused,” Sommers says. People were patient, courteous and in the holiday spirit, for the most part.

“You can’t make everyone happy,” he says. But most people were happy to use detours and park away from their homes or businesses.

“The vendor pays for police services, they rent building space out and they spend a lot of money here,” Sommers says.

And the best part is, Frederick residents get to see their hometown on screen.