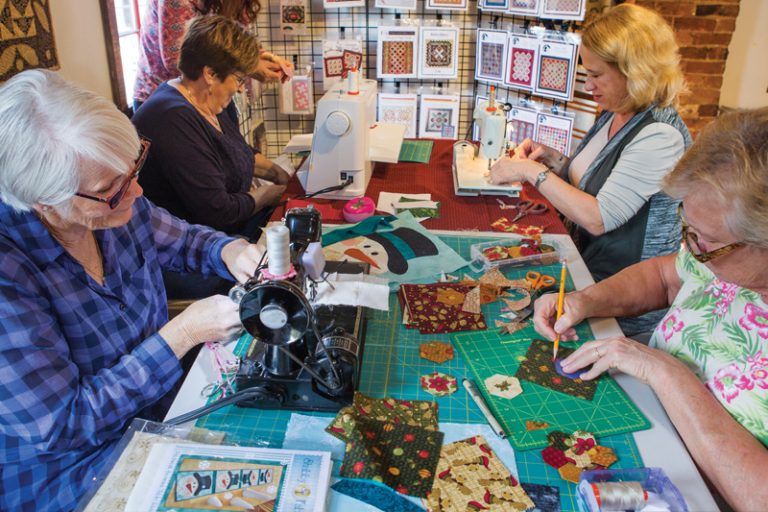 Ginny Green has a thing with fabric—the touch, the colors and the history of the fabric designs.  In her skilled hands, and in the hands of other seamstresses, fabric can become almost anything, a dress, table runner and, when it’s created into a quilt, it can become a story.

On a cross-country vacation with her husband three years ago, Green, a retiree, enjoyed seeing the sights, but something was missing. And she knew exactly what it was. She told her husband that she needed to get to a fabric store.

“He said, ‘Why?” and I said, ‘I’ve seen land. I’ve seen Colorado. I’ve seen Utah. But I have to feel fabric.’ There’s something about fabric that when you touch it, it just excites you. It brings peace to you. It’s a peace in this hectic world,” Green says. Creating with fabric often draws together like-minded people who join quilting bees and guilds, take classes to perfect their skills and commiserate when a design goes awry.

In Frederick, Green found her way to Charlotte’s Cottage Quilt Shop to get her fabric fix. The boutique is owned by Susan Napoleon and offers a vast selection of fabrics from specialty replicas and reinterpreted Civil War textiles to more modern design, color and theme varieties. Charlotte’s was originally housed in Walkersville, which is where Green first met Napoleon, but the shop can now be found in Shab Row on East Street.

“When you go into the store, it’s like a stress releaser. The smiles, the fabrics, the new spools of thread … you can leave all of the daily life pressures right there,” Green says. “[Napoleon’s] teaching staff is phenomenal. It’s a happy place.”

“I think that anybody that has quilted realizes there’s a peace in it where you sit down and you concentrate on the work,” she adds. “If you ever had panic attacks, they always tell you, find something that soothes your soul and stay with it. I think that’s what quilting does. If you come in and you’re angry or mad about something, it just brings a peace to you.”

People worldwide have ordered fabric from Charlotte’s. In mid-October, a customer from New Zealand filled a suitcase with fabrics. “We live in a very history-rich area here, between Gettysburg and Antietam,” Napoleon explains, with some fabrics unique to the region.

Napoleon, originally from New York, inherited her interest in sewing from her mom. Growing up, her mother would make all of her and her siblings’ clothes. “I didn’t know clothes came from a store when I was young,” Napoleon says.

Napoleon’s mom started quilting in her 40s, passing along the interest to her daughter. With that introduction, coupled with Napoleon’s love of history—her major in college—quilting became a natural progression.

Quilting dates as far back as Egypt some 5,000 years ago. It is an art form that relies on the use of pieces of material to create tapestries of intricately woven designs. In the United States, after the Civil War and during the Industrial Revolution, textile production skyrocketed, making it easier and even cheaper to gain access to more fabric and materials. The appeal for quilting grew and is still as strong as ever. “In this country, with poor people, there was no waste. In the 1930s and ’40s, they used flour sacks. They would go to the mill to pick up their grain, their flour, and the wives would make clothing and quilts out of the sacks,” Napoleon says, adding that quilting’s popularity has remained constant. “There are younger designs with a different look that appeal to a lot of people,” she says.

The shop is in the midst of running a Christmas-themed class where students like Green are making table runners and/or wall hangings. Green has taken several classes at Charlotte’s and also at Joann Fabric and Craft Store.

“We’ve done the log cabin quilts. I finished an heirloom quilt that … I did through Charlotte’s Cottage. I’ve done the wedding ring quilt, the pinwheel quilt. Then I do a lot of table runners, wall hangings, small things that you put around the house,” Green says.

Napoleon is planning a beginner’s class on quilting to start in January. Susan Alexander, an instructor at Charlotte’s, will be teaching. Alexander has been sewing and quilting for 28 years and loves that her beloved art form has picked up interest with younger people.

“Quilters are getting younger. They are new moms, professionals looking for relaxation,” Alexander says. “The friends you make doing it is where it’s at. You can get together with a girlfriend and sew all weekend.”

“One thing I’ve noticed about quilters is they will share any bit of knowledge they have with anyone,” Green says. “You go into a quilt store and you can talk to anybody in there and they will say, ‘Have you tried it this way?” It might be someone who comes in who has already worked on something that you’ve done. It’s not like a workplace where they climb over your back to kill you. These women cannot wait to share the knowledge they have with you or to help you with any project that you have.”

With quilters, “there’s so much love out there and so much kindness, so much help and so much friendship. I’ve made so many wonderful friends who I would invite to my house in a minute to have dinner,” Green says.