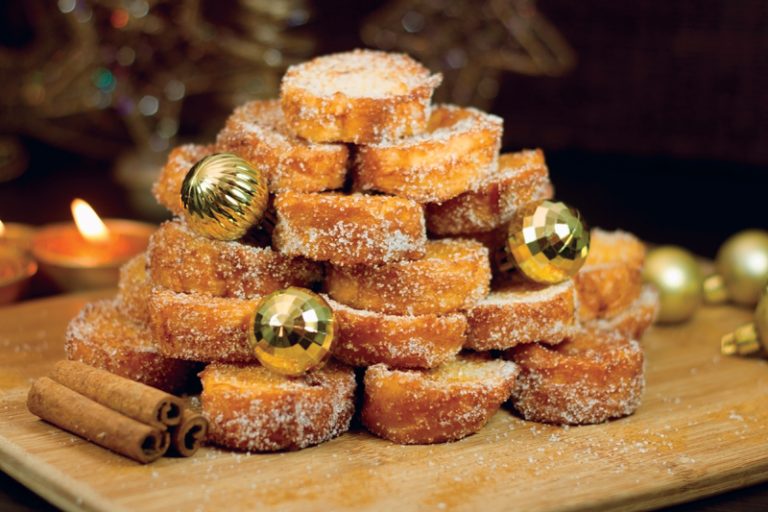 Food (and Other) Traditions Boost Fortunes in the New Year

“Senior moments”—wondering why you walked into a room—actually have a purpose. These incidences link to a brain function that helps us compartmentalize thoughts and focus on a new task. Wiping the slate clean enables a fresh start. New Year’s traditions have a similar effect. They prompt us to forget tired notions and habits, while embracing a hopeful eagerness for the year ahead. How can we guarantee a good one? Hard work and conscientiousness, of course, but it doesn’t hurt to add some reinforcements. There are as many rituals for garnering luck as cultures around the world. So, choose a favorite and go for it.

An entirely informal survey of Fredericktonians revealed practices both common and unique. Food plays a central role in laying a lucky foundation. Items deemed indulgent, sweet, money-shaped, golden or simply plentiful are considered luckiest of all. Overwhelmingly, Frederick residents with Germanic roots like to feast on juicy roast pork with sauerkraut or ground pork rolled into tender cabbage leaves. The tradition evolved because the meat is often described as “rich,” which is what we want to be. Pigs also symbolize progress, since they move forward to forage. (Unlike, say, backward-scratching fowl.) Leafy cabbage epitomizes paper “greenbacks.” Cooks might throw in a side dish of carrot “coins,” too.

People in Spain and much of South America eat naturally sweet grapes for luck. Stefan Fernandez has German and Cuban ancestors, but grew up in Venezuela. He remembers this tradition fondly. He says, “We would have wine glasses filled with 12 grapes,” one for each month of the year. Eaters make a wish with each grape, but don’t waste time. “This has to be done right before midnight,” he adds.

Marta Hernandez works at Centro Hispano de Frederick. She was born in Honduras and remembers the custom, too. “In my family we had a midnight buffet with tamales and lots of baked goods.” Neighbors were invited. “It was mostly about the gathering.” Torrejas (a syrupy donut-like dessert) are popular at Honduran festivities. Around the world, revelers invoke “sweet” blessings by eating such treats. In Greece it’s vasilopita (St. Basil’s Bread), a soft orange-infused coffee cake. An embedded lucky coin confers extra fortune on its recipient. Likewise, Swedish folk hide a lucky almond in creamy pudding. In France, merrymakers look for a promising find in “King” cakes or indulge in heart-shaped cakes (le Coeur de l’an) and ice cream logs. One French village is known for torchlight processions into the vineyards. Grape harvesting begins just after midnight and the resulting sweet wine is specially labeled.

Actions are lucky or unlucky, too. Looking for love in Italy, Brazil, Ecuador, or Bolivia? Don new red underwear. Choose yellow undies for wealth/gold. Clothing decked with coin-shaped polka dots is popular in the Philippines. It’s even better if your outfit has a deep pocket with money inside. Holding cash at midnight is good, too. Hoping to travel? Grab your suitcase and dash around the block. Just watch your step. People may fling pans, clothing, pails of water or furniture out of windows, enacting the adage “out with the old, in with the new.” Others clean their homes and restock cupboards in advance, believing that circumstances on New Year’s Day set the tone for the next 364.

The tradition of “first footing” comes from Scotland. Folks in England, Wales and Vietnam celebrate similarly. Gatherings start on “Hogmanay” (Dec. 31) but midnight is the magic hour. The first person into a house on Jan. 1 brings the luck. It’s particularly auspicious if that person is a tall, dark male bearing gifts of bread (for a full larder), whiskey (to toast the family) and coal (signifying ample wealth for comfort).

Kathryn Darling came here from Edinburgh 22 years ago. She stays connected to her heritage as a member of St. Andrew’s Society of Mid-Maryland. The group perpetuates Scottish traditions and culture, including an annual Hogmanay celebration at the Urbana Volunteer Fire Department. The event features Scottish country dancers, bagpipers, trivia, raffles and food. Darling says, “Back in the day, people came around to neighbors’ houses for a drink. On our street, everybody’s doors were open. It was one big party … regardless of the weather.” Darling recalls her mother, Mary Dalgleish, ladling out fortifying tattie (potato) soup after the revelry.

Dalgleish, now 90, chimes in via phone from Scotland. “It’s changed over the years.” She explains that neighborhoods aren’t as close-knit now. And driving to multiple homes can be dangerous if the lucky visitor “might have a wee tipple too much.”

Brunswick Area Recreation Council hosts a First Footing shindig, too. It’s a free community event starring the Frederick Scottish Pipes and Drums. At midnight, the crowd croons along to Auld Lang Syne and shares a blessing for the year ahead. Festivities continue with Freezin’ for A Reason, a daylight dip into the Potomac River for charity. Lee Zumbach coordinates the plunge, assuring all, “They only have to get in up to their ankles.” Some people dive in, channeling the heroism of similar traditions in the Netherlands, Ireland and Canada.

Jan. 1 is globally recognized, but Hindu, Chinese, Coptic, Jewish and Islamic calendars have different cycles. Eran Bosaz is operations manager for the Asian American Center of Frederick, a nonprofit that helps immigrants and others connect with resources, such as language classes. Bosaz’s smile broadens when asked about lunar New Year in her native Hong Kong.

“The date is different every year, but it’s always between mid-January and mid-February.” She recalls eating long noodles for long life, savory golden dumplings stuffed with pork, cabbage and sparkling fish. “In Chinese, the words for ‘fish’ and ‘extra’ sound similar.” Red and gold are lucky colors. For greater fortune, people decorate with kumquat plants, lucky words and poems. She points to a plaque in the office. “You hang the character for luck upside down so it drains into your house.”

Bosaz is exuberant about the Center’s annual Lunar New Year celebration at the Urbana Library on Jan. 28, highlighting crafts, activities, tea tasting and appearances by local dignitaries. (Feb. 16 starts the Year of the Dog.) Everyone is welcome. “We had 600 people last year,” says Bosaz, sagely noting that, across every culture, renewal and reconnection are core values of the holiday. “As long as you are happy,” count yourself lucky.