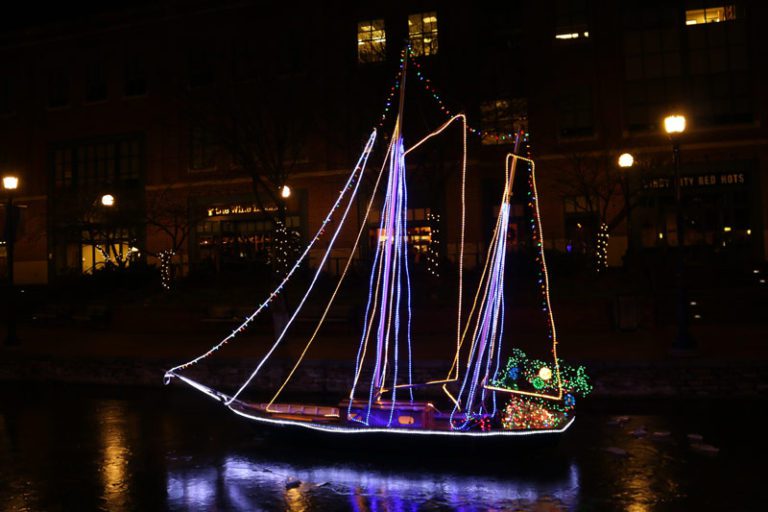 In a barn near Myersville, nowhere near any known navigable water, a regatta came together this fall. And don’t worry about needing virtual reality glasses because these are real boats. They might not be sailing too far, but they do actually float. At least, that’s the plan.

Here, amid the whirring of power tools and steady thump of classic rock music, a trio of volunteers created something Frederick County had never seen before: a collection of boats that will grace the calm waters of Carroll Creek Linear Park in Downtown Frederick for the next two months.

But this story actually begins last year with one boat, Stargazer, which was anchored on the creek and bedecked in holiday lights.

Dr. Peter Kremers, founder of the Color on the Creek water garden project, and friend/design guru Kyle Thomas created Stargazer at Kremers’ suggestion. “I was at a bar near Thanksgiving and ran into Kyle, and he was like a bass out of water, leaping into it,” Kremers jokes. “It was amazing to use all of his talents.”

And they knew it could be even bigger. So the pair was joined this year by Josh Diffenbaugh, whose automotive- and sign-painting skills are now being used for a nautical function. Harry and Natalie Louden donated the barn that has been turned into the shipyard needed to create the regatta.

The trio built six boats for sponsors, including BB&T Bank, Colonial Jewelers, Flying Dog Brewery, Property Management People, The Wine Kitchen on the Creek and Visit Frederick. Each boat is themed as a different style of tall ship, with input from the sponsors.

The sponsors are raising money to support their boat. Some of the money will go toward Color on the Creek, but the rest will go to a Frederick-based nonprofit of the sponsor’s choosing.

The Rotary Club of Carroll Creek is also contributing its own boat to join the fleet—and is providing a little friendly competition between the trio and the club, too. “They’re building their boat in secret—the guy in charge has this A-team of welders, electricians and cabinetmakers,” Kremers says, laughing. “We’ve been trash talking a little bit; it’s been fun.”

Construction on the Rotary Club’s boat began in its “dry dock”—a local garage—last May, says Melissa Joseph Muntz, part of the group of about 10 that has been involved in the project. Named the Carroll Creek Clipper, the boat has both aesthetic and structural appeal, as builders were mindful of weather last year that caused Stargazer to capsize. “We certainly built it to be very strong,” Muntz says.

Kremers says the reason for both the boat project and Color on the Creek is simple—wanting to make the park a destination space. He’s hoping the hotel proposed along the creek will help increase foot traffic, and wants to be sure there’s something to see and do once people get there. “The linear park ought to be like an old town square—a place for people to meet and talk,” he says. “The more we make it attractive for people to come down, the better it is.”

Muntz, marketing and communications manager for Visit Frederick, agrees the appeal of a regatta of boats adorned in holiday lights should make a visual impact. “It’s an all-around fun, positive project, she says.

Kremers was inspired by the parade of light in Annapolis and other cities, where ships are lit and sail on a one-night event, but wanted to find a way to make it a more lasting event to draw in people from out of town, and one that wouldn’t be easily derailed by bad weather.

“We have the perfect venue, and the winter is kind of dead on the creek—the water garden is done until April,” he says. “This is a way to liven up that whole promenade, and bring people down there. Our hope is, long term, things will sprout up around this, like a winter festival. Certainly it will brighten up the New Year’s Eve celebration.”

Stargazer had a four-week run last from the night of the Kris Kringle Procession through New Year’s Day, but the fleet will be floating through First Saturday’s Fire in Ice on Feb. 3. The boats will be floating in a section of the park between Market and Carroll streets.

Kremers hopes that eventually the boats will have more space available, enabling the involvement of local high schools or other community organizations. Instead of building the large boats he and his team are working on, those groups could work on toy boats, which would cost much less to build, and be placed in the water in a different part of the creek.

Stargazer was put together at a breakneck pace last year to make it in time for the deadline. “We did that boat in two weeks, but we were up until two in the morning, it was crazy,” Kremers says. “I mean, it was stupid. We rigged it up in my garage, We had no place to lay things out. We put the mast up two days before and rigged it up with the lights.”

He’s been slowly acquiring boats over the course of the year, with work beginning in earnest in mid-September. Kremers guesses it took roughly 500 hours to get the six boats ready for display, with costs between $1,000 and $1,500 per boat, depending on the initial purchase cost. Several boats, however, have been donated. Much like the body of a car sits atop a frame, the actual boat is largely covered up by the facades they are building, turning a simple sailboat into a classic tall ship lookalike.

Once built, they are decorated with lights and adornments for each sponsor. The lighting for the boats is powered through outlets available on the creek, and the cost for power comes out of the sponsorship money.

Thomas, who has a degree in scene design, formerly worked for Saks Fifth Avenue in New York City, building window displays. While he wasn’t building many boats there, he says a lot of the fabrication skills translate to the current project.

He says many of the design ideas are based on the boats they’ve acquired. He tries to match their shape to the overlay, so a sleek, shallow boat gets paired with similar boat design. “We want to keep the aesthetic of Old World sailboats,” Thomas says. “We don’t want to get into Viking ships and pirate vessels. We want to keep it Old World classy, and throw a little twist on each one to match the sponsor.”

For Property Management People, his parents’ company, the boat will feature a cabin made up of several houses, akin to the multiple properties the organization manages. Other boats will be themed in similar fashion.

One of the major challenges they’ll face is dealing with ice as the creek freezes over. Last year, Kremers ended up going out on the creek and breaking the ice around Stargazer, so they’ll have to remain vigilant with the larger fleet on the water.

“If we got two feet of ice out there, it’d crush the boats—expanding ice is like being in a vice,” Kremers says. “Sometimes it will pop the boat up out of the water a little bit and you would be OK. If it got really bad, we’d have to go out with chainsaws and cut them out.”

And while there have definitely been ships built to withstand ice, they’re typically designed for open-ocean sailing, not docking in a creek, which makes a pretty big difference in design. “In a sense, we’re building Arctic creek sailing craft, which has never really been done before,” Kremers says. “We’re kind of making it up as we go along, which is fun.”

Diffenbaugh joined the project after seeing a photo of the Stargazer and talking to Kremers, offering to lend his painting skills for the boats they were going to build.

“With all the sponsors, we got together and coordinated either their brand colors or what they might want. For instance, Colonial Jewelers is doing a breast cancer awareness theme, so it will be bright pink and white,” Diffenbaugh says.

He says that working with companies like Colonial Jewelers is one of his favorite parts of the project, as it both allows him to meet new people and it creates community support. “Now that there’s going to be seven boats, I’m hoping it gets people more excited—we’ve got to get out to Frederick and see these boats,” he says.

Thomas says he appreciated the opportunity to put his fabrication skills back to work, but he also appreciated just getting to be part of the community.

“It’s a collaborative process, and it ultimately is going to bring a lot of joy to people Downtown,” Thomas says. “Every part of it is great—I get to build boats and the people get to enjoy it and see it, we get to promote more business Downtown with more people walking by, and we’re donating money to charity. It’s win-win-win.”