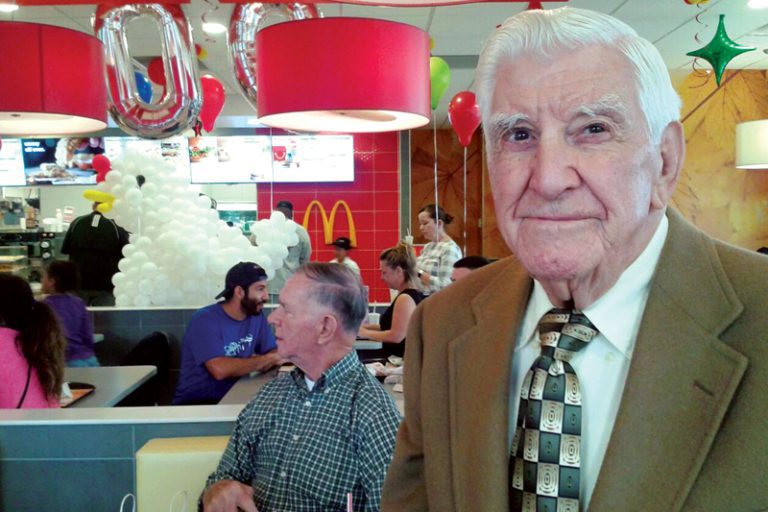 ‘Grandpa’ Finds a Home at McDonald’s

Happy faces joined the Happy Meals at McDonald’s recently in the Frederick Shoppers World on the Golden Mile when long-time employee George Haller was feted for his 90th birthday. Coinciding with the celebration was the observance of the store’s 25th anniversary. Owners Syed and Sadia Anderabi have three McDonald’s in the Frederick area.

“It’s so beautiful to have everyone here,” Sadia said to the lunchtime crowd gathered to salute Haller and the couple, complete with a chocolate cake decorated with “90” in red icing, proclamations from City Hall and lots and lots of balloons.

Haller, who has lived his entire life in Frederick, joined the Golden Arches 25 years ago after retiring from a career in accounting. He uses his numbers skills at the business, but also does “whatever needs to be done,” he said whether it’s landscaping the properties or making customers feel at home. Although he claims to be a good cook, especially his skill at making beef stew, he said he doesn’t work in the kitchen. His co-workers, decades younger, call him “Grandpa.”

Haller doesn’t have any immediate plans to retire a second time. He said, “I want to work as long as I can.” He attributes that mindset to his longevity and recommends others “keep working if you can.” A friend chimed in that Haller has been around so long because “he doesn’t smoke, drink or chase women.”

Gail Bradshaw is part of a regular group that frequent the McDonald’s on Old Camp Road where Haller also puts in hours. She was at the party enjoying a piece of cake and said seeing his smiling face when she comes in makes the visit special. “We like to exchange stories,” she said.

They might not have the years that Haller has, but the Anderabis are equally well-known in the community. DeVeda Coley, principal at North Frederick Elementary, said, “They have been wonderful partners with us,” making many contributions, including promotion of literacy initiatives. They also provide back-to-school giveaways, Thanksgiving meals and school spirit nights. “We love them and are so blessed to have them,” Coley said.

This marks the second time SJRCS has received this honor, previously being cited in 2009. SJRCS was one of only 50 private schools across the country this year selected as a high-performing school.

“This validates that all the countless hours of hard work by the school administration, teachers and staff are paying off for our students,” says Principal Karen Smith. “It is gratifying to know that we were able to meet the required test scores in math and reading at all grade levels to qualify for this nationally recognized award. Our students are testing within the top 15 percent of the nation in both math and language arts.”

All winning schools will be honored at an awards ceremony this month in Washington, D.C. For more than 30 years the department has bestowed this award on some 8,000 American schools. National Blue Ribbon schools represent the full diversity of American schools, including public schools, charter schools, magnet/choice schools, Title I schools and private schools. Winners are urban, suburban and rural, large and small, traditional and innovative, and serve students of every social, economic and ethnic background, Department of Education officials say.