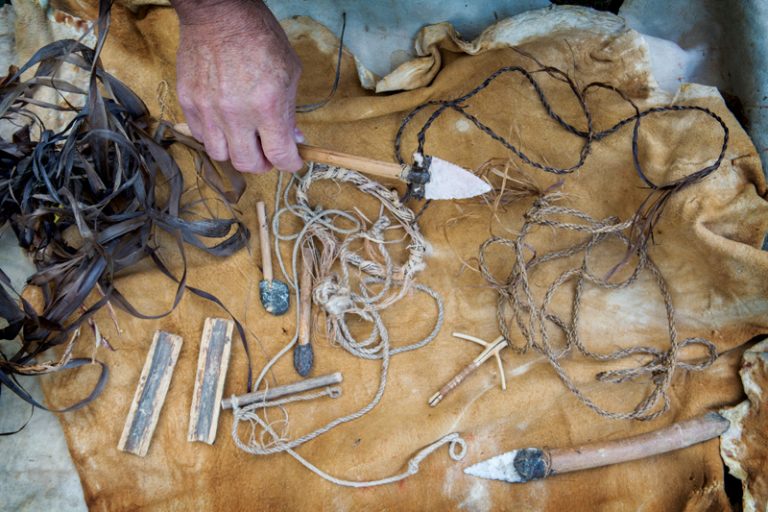 The yellow-hued soybean leaves softly wave in the wind at a farm field outside of Walkersville near the Monocacy River. Butterflies feed off plants, and in the distance is the traffic hum of U.S. 15. Hundreds of years ago there was also the hubbub of humanity here, but today the evidence of that life can only be seen underground.

November is Native American Month, a chance to look at the history of these people who lived on this land long before Columbus set foot on the Caribbean Islands. Before European explorers brought their goods and culture to America, a Native American civilization thrived in what is now Frederick County.  Communities of people lived along rivers, creeks, streams and springs. There’s evidence of their existence, but much of it is buried or lost to development.

Frederick County’s Native American heritage isn’t as entrenched as in other parts of Maryland. That’s probably because there weren’t large communities here when European explorers ventured west from the Chesapeake Bay.

Archeological excavations, however, show the existence of populations around 1000 AD. And Native Americans were most likely here as far back as 8000 BC, according to retired archeologist Hettie Ballweber. But signs of their presence have mostly disintegrated.

“All our dates are approximate,” says Nancy Geasey, of Frederick. She and her late husband, Spencer, spent many years exploring the early history of Frederick County through archeological digs. In fact, the couple met on a dig.

Around 11000 BC, or 13,000 years ago, in the Paleoindian period, Native Americans probably lived in semi-Nomadic bands, hunting and taking advantage of local resources. Archeological digs in Pennsylvania and Virginia’s Shenandoah Valley indicate that people gathered in base camps, possibly during harvests.

“We have no known Paleo sites within Frederick County, as we know it,” Geasey says. There are indications that people were here then, however. A jasper quarry near Point of Rocks, likely used in that period, is now covered with houses.

Life back then needed to be portable. “They were using things that were easy to move,” Geasey says. “They weren’t using clay pots. They were using baskets and hides. If you wanted to heat water over a fire, you can use a hide. Knapsacks were made of hides and furs. These were people who were used to living off the land.”

In the Archaic period, from 8000 BC to 1000 BC, melting glaciers helped form the Chesapeake Bay. Villages appeared along the bay, and evidence of these villages still exists today.

Around 1000 BC, in the beginning of the Woodland period, groups of Native Americans regularly visited areas near Frederick. Two such groups were the Montgomery Complex and the Luray Complex.

By 1000 AD, the Montgomery Complex occupied what is now called the Biggs Ford site along the Monocacy River. This site, like the Rosenstock site east of Frederick, has rich, fertile soil, good for growing corn, beans and squash, dietary staples. It’s a half mile from a natural spring at Fountain Rock. The Montgomery group returned to the site repeatedly until about 1450. By 1300, the Luray Complex also encamped there, off and on until about 1500.

Historians and archeologists learned a lot about the people who lived here, as well as the Rosenstock site, through excavations. Spencer Geasey first encountered Biggs Ford in the 1950s. In 1969, before a sewer line sliced through the land, he brought in a team of archeologists who discovered a large trash pit, fire pits and post holes, clear evidence of a settlement. Later digs occurred in 2013, ’14 and ’15.

The post holes indicated wigwams, typical shelter for Eastern Native Americans. Wigwams, round or elongated, were made of material easy to gather from the surrounding area, and were practical for cold winters.

Dried tree saplings were tied to logs sunk into post holes dug into the ground. The saplings were bent to form the roof, tied together with fiber, usually made from stinging nettles or other nearby vegetation, and covered with hides, with a smoke hole in the center above a fire pit. Wigwams often lasted only a year or two, and would be rebuilt.

A lot of clay pot fragments were found. Clay, which is versatile and light, supplanted soapstone for pots. The clay was made of dirt bound together with sand, rock or other firm material, and was easy to mold. These pots tell a lot about a local population—the materials used and the food cooked in the pot, offering clues to the lives of the native people.

One clay pot at the Biggs Ford site exploded while the meal was cooking, which was the end of that meal. Apparently the fire became too hot, Geasey says. “We can tell that happened because all the pieces were found in one place.”

The village was surrounded by a palisade. Usually made of fencing, the palisade was moved outward as the village boundaries grew and protected villagers from outside animals and invaders, plus it kept the dogs in.

Arrowheads indicated the sophisticated weapons the pre-Columbian Native Americans used. The more ancient weapons were spear points, which were not as accurate or powerful as arrows.

The material in the arrowheads ranged from chalcedony, not local, to rhyolite, which was local. Long before Europeans arrived, Native Americans had built a sophisticated trading network, Geasey says.

A rhyolite quarry along Crow Rock Road near Myersville was extensively used in this period. A rock shelter, still there today, sheltered native people who came to make arrowheads. For many years, Geasey and her husband lived near the shelter, and raised their family in a house just up the hill.

Elongated wigwams have also been found at a 900-year-old settlement at Noland’s Ferry, along the Potomac River in southeastern Frederick County. Dark patches in the soil indicate post holes.

Living Off The Land

Imagine life without metal. Even when we go back to nature, we use metal. It’s in the ax used to chop wood for the stove. It’s in the canteen, the fishing pole and lure. It’s in our gardening tools.

Guy Neal of Woodsboro makes prehistoric survival items and teaches others about prehistoric living through his business, Primal-Knowledge. He specializes in the clothing, tools and implements used in the latter part of the Stone Age, from about 9000 BC to 2000 BC. He makes clothing and blankets out of deer hides, using tools made in the prehistoric fashion. He has a replica wigwam and makes fishing poles and hooks using natural cordage and thorns.

Most of these items were never documented because most didn’t survive. So Neal experiments. “I’m using organics,” he says. “It’s not specific to Native American things.”

He teaches a class in making traps with natural materials and recently found a stone in the Monocacy River used for scraping animal hides. “That would have been something they would have ground out of stone,” he says. The item dates to the pre-Columbian era.

He tans animal skins using a process to make the skins watertight and builds primitive kilns out of straw, sand and clay. He makes bows out of green wood, the way Native Americans would have, and arrows out of stone.

Neal worked on the Biggs Ford and Rosenstock archeological digs to learn about native populations in Frederick County. He’s trying to learn all he can about primitive life. “Just gathering firewood is a whole different thing,” he says. “A stone axe is not as efficient as a metal axe. You use up resources. You’re burning fire 24/7. You’ve got to have fuel every day. Eventually, you denude the area.”

Communities were forced to be nomadic to survive. “It doesn’t take that much wood to clear an area,” he adds. “You needed to be close to your wood. There were no pickup trucks to carry it. Everything we do is processed before we get it.”

Native Americans, along with other primitive populations, were truly in tune with nature, he says. Their lives were guided by the environment and the seasons.

Schifferstadt is considered Frederick’s oldest house, but its location along the fast-flowing Carroll Creek made it ideal for Native Americans long before German settlers arrived. Behind the old stone house and the German-style garden, the land slopes down toward the creek. Throughout the property, there’s evidence of Native American settlements ranging over thousands of years.

Quartz and rhyolite projectile points, tools and tool fragments indicate populations in the area from at least the late Archaic period through European colonization. Carroll Creek was also a major transportation route for pre-Columbian people traveling to the Crow Rock Road rhyolite outcropping.

Schifferstadt “was a seasonal resource,” says Hettie Ballweber, who documented a 1997 dig. “The uses would have been opportunistic, whether for hunting, fishing, plants or as a freshwater source.” The area was used to smoke and preserve meats and process hides. Tools were also repaired, reconfigured and sharpened to match their tasks.

“The fact that Archaic-period projectile points and a late-Woodland point were found suggests that the site was occupied at various times throughout prehistory,” she writes. The spot was ideal for viewing game movement along the creek banks.

“People moved according to the seasons and what was available,” she says. Excavations at Schifferstadt are limited, hampered by its urban surroundings. Archeology is not written history, sometimes to its detriment, Ballweber says. “Archeology can add to written history, confirm it or disagree with it.”

But what is known about Schifferstadt agrees with common sense. “Think of yourself as a survivalist,” she says. “You’ll look for a south-facing slope above a creek. You’ll be among plants and animals you could exploit. It’s all based upon human needs.”

The Schifferstadt site is valuable because it’s still a preserved slice of history surrounded by an area of intense development. It’s a good reminder to Frederick people today of those who came before them.

The Tuscarora and Piscataway people did occupy Frederick County, but most likely not until after European colonization. These tribes figure into the county’s history, not because members spent much time here, but because Europeans were around to record their presence.

The name Tuscarora is familiar to most Frederick County residents because of Tuscarora Creek northwest of Frederick, originating in the Catoctin Mountains, and the community of Tuscarora near Dickerson.

The Tuscarora were a people on the move, according to Geasey, who credits the book Tuscarora: A History, by Anthony F.C. Wallace, published in 2012, for an explanation of the tribe’s local presence.

The tribe is part of the Iroquois Confederacy, which flourished for hundreds of years in what is now upstate New York. About 900 years ago, the Tuscarora left the area and began migrating, traveling east, then west, then south, settling in North Carolina.

After a tragic battle in 1713, the Tuscarora headed back for New York. They came through Frederick County 300 years ago, 600 years after leaving their upstate New York homeland.

Most didn’t stay long. Native Americans were trying to carve out an existence despite the increasing European presence. Tuscarorans lived in the county for a decade or two, although some were still in the area 100 years later, into the early 19th century. “According to the Moravian Church records, they were still entertaining Tuscarora Indians in 1820,” Geasey says.

Piscataways once lived on Heater’s Island in the Potomac River. This mobile offshoot of the tribe, about 300 strong, settled there in 1699, building 27 cabins. The struggling group was hoping to find its way in an increasingly European land. Piscataways, like other Native Americans, were pushed out of their territories. Often this led to unfriendly encounters with other tribes, as well as with European settlers.

The Piscataway left Frederick for Pennsylvania around 1712, and never did find that elusive place to call home. Three hundred years later, some descendants returned to Heater’s Island in a 2015 ceremony to honor those ancestors.