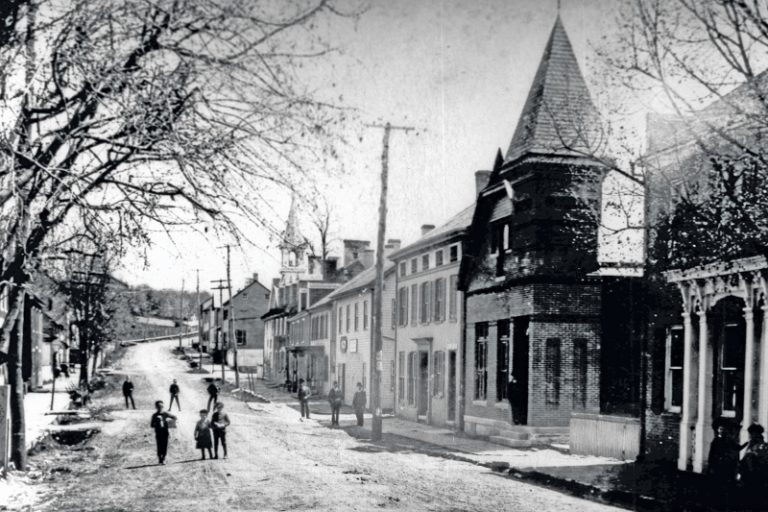 Middletown Celebrates 250 Years By Looking Back … and Ahead

It was perfectly situated for success: a location in the middle of a fertile valley between two mountains, a place where the main route heading north and south intersected with the route heading east and west. Not surprisingly, its name became Middletown.

“There was a creek nearby and it became a natural place for people to assemble,” says Dwight Hutchinson, volunteer with the Middletown Valley Historical Society.” The Old National Pike was the first macadam road in the country. The rest of the routes were more like trails. Lots of people were traveling the road driving animals and goods across it.”

Inns and small businesses catering to the travelers sprung up around Middletown and William Penn solicited German settlers to come to the area and farm.

The town was founded in 1767 by Michael Jesserong, who laid out the original plots and then sold the acreage to Conrad Crone, who developed the land. Settlement began near the creek and moved eastward.

For long-time Frederick County residents, images of Middletown might include a lush green valley dotted with family farms leading into the center of town anchored by the iconic white steeple of Zion Lutheran Church. Much has changed over the years, but many of the historic buildings remain.

If history had taken a different turn, however, that might not be the case. During the Civil War, Confederate Gen. Jubal Early demanded a ransom of $5,000 to save the town from destruction. (The handwritten ransom note can be viewed at the Heritage Gallery in the town hall.) Town officials negotiated for more time with a down payment of $1,500. Fortunately, Early and his troops had to leave before the rest of the ransom was paid, and the town avoided ruin.

While Middletown only experienced a few skirmishes during the war, it did receive many wounded soldiers from the battles of South Mountain and Antietam, including future President Rutherford B. Hayes. Many homes and churches were used as hospitals.

With such a rich and varied history, deciding how to best celebrate the 250th anniversary fell to a committee co-chaired by John Gladhill and Becky Axilbund, the town’s Main Street manager. The planning started in 2015 and activities have included everything from small gatherings to large street events. “We knew we’d be in the middle of a Main Street enhancement project in 2017, but we had no idea when it would take place,” says Axilbund. “So instead of trying to plan one big celebration and risk it hitting during that time, we decided to opt for smaller events throughout the year.”

Every month this year has featured a “Town Talk” where a different aspect of the town’s history is highlighted and discussed. Burgess John Miller asked the committee to choose a venue related to each discussion instead of holding them all at the town hall.

For example, Historic Preservation Month showcased the old homes of Middletown and agricultural history was discussed during Dairy Month at South Mountain Creamery.

Another history-related activity is the quarterly luncheon held for the oldest citizens with three to four generations of family living in Middletown. Their memories and knowledge are videotaped for future generations.

“I feel like I know a lot about Middletown,” says Axilbund, “But I learn something new every time I go to one of these discussions.”

Over the many years, Middletown farms and businesses prospered. Evidence of that can be seen in the many stately homes located along Main Street. The National Register of Historic Places recognizes two historic districts covering multiple neighborhoods in Middletown.

To showcase this aspect of the town, officials revamped the self-guided walking tour into six distinct segments. Each can be done in approximately 30 to 45 minutes. Brochures are available at the town hall or at the Frederick Visitor Center. “Of course, you can drive or ride a bike and follow the tour, but we really hope people will get out and walk it,” says Axilbund. “That’s really the best way to experience it.”

October marked the grand opening of two new additions to the town—Heritage Park and Heritage Gallery. The park is located at the corner of Main and Jefferson streets, across from town hall. It’s a joint venture between the town and owners of the land, Middletown Valley Bank. “It’s a nice little green space in the middle of town,” says Miller. “It’s our gift to the town.”

The gallery is located on the second floor of town hall. With the help of a grant, a lackluster meeting room was transformed into an interpretive history display. The room features some interactive stations, as well as a large collection of Middletown memorabilia provided almost entirely by Town Commissioner Larry Bussard.

While October featured something new, this month looks backward again. “This year marks the 100th anniversary of our entry into World War I,” says Miller.  “So we have decided to rededicate the plaque to honor these soldiers on Veterans Day.”

On Nov. 15, World War II Veterans are the focus of attention for the November “Town Talk,” which will be held at the Christ Reformed Church at 12 S. Church St. at 7 p.m. The town, in conjunction with the Middletown Valley Historical Society, will host veterans recalling their wartime experiences.

Winding down the year, but kicking off the holiday season in style, is “Christmas in the Valley” on Dec. 2. from 4 p.m. to 8 p.m. It includes the lighting of the Christmas tree, the arrival of Santa Claus and seasonal music. “It’s a great family event,” says Miller. “We also do the ‘Miracle on Main Street.’ If a child brings a new, unwrapped toy to donate, they will receive a stocking. They can then take it around to the stores and businesses and receive a treat to fill it.”

Axilbund encourages anyone interested in attending one of the remaining functions to check the town website at www.middletown.md.us for any last-minute scheduling changes.

It would seem the anniversary committee hit its mark by highlighting Middletown’s history while also providing the platforms to gather and share more information with those who came after. “It’s been a great year,” says Miller. “A lot of good things have happened that will continue on for years to come. This celebration has been very successful in that regard.”