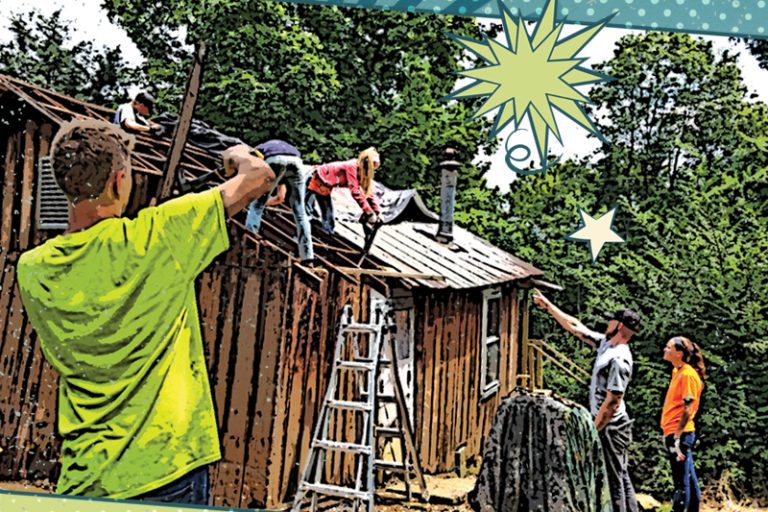 If you ask best friends Katie Athey and Maddie Laramore about their favorite time of year, you might expect the high school juniors to say summer vacation, maybe Christmas break or perhaps homecoming week.

Instead, they both agree the event they anticipate the most is the week they spend each summer repairing homes in some of the poorest parts of the United States as part of the Appalachian Service Project (ASP).

“I look forward to it every year,” says Laramore, who attends Catoctin High School and has participated in ASP for several years through her church, Brook Hill United Methodist Church in Frederick. She and Athey, who attends Middletown High School, will be part of the estimated 45 people Brook Hill UMC will send to Appalachia again next summer. Despite the heat, the difficult working conditions and the abject poverty they see, they say they wouldn’t miss it. “It’s remarkable to see what the impact our work can be on the lives of others,” Athey says. “I just love it.”

Any parent who has raised a teenager knows that acne, moodiness and self-centeredness are standard equipment for adolescents. Ironically, however, they may roll their eyes and complain about taking out the trash or cutting the grass, but when it comes to serving their communities and the less fortunate, many of these young people demonstrate incredible dedication and generosity.

Child Trends, a national nonprofit research organization, reports that teenagers ages 16 to 19 were more likely to have volunteered over the previous 12-month period than any other age group under the age of 35. And to those who believe kids these days are even more self-absorbed than the generations that preceded them, nearly 40 percent of these teen volunteers reported that they approached the organizations they help.

In fact, it was students at West Frederick Middle School who asked their teacher, Leslie Williamson, if they could expand their in-school philanthropic club to include efforts outside of school, as well. So Williamson began researching youth programs around the country that she could emulate to fulfill her students’ request. Three years ago, she established the nonprofit Kids These Days.

She now has more than 300 young people on her mailing list, many of whom are “regulars” who return again and again to participate in everything from park clean-ups to social events at local senior living centers.

The organization doesn’t have any minimum participation requirements. There are no fees to join. The only requirement is that members must be in middle school or high school. “They come from all different socio-economic levels. We’ve even had kids from the homeless shelter work with us, but when they are here they are all the same,” Williamson says. “These kids are not afraid of hard work and they have fun.”

At age 14, Cristian Castillo is already a Kids These Days veteran. He was one of the group’s first members and has already put in more than 100 hours of volunteer time with the organization, attending nearly every event. The paint-splattered Kids These Days T-shirt he wore while spreading mulch at Old National Pike District Park in Mount Airy early one Sunday morning was evidence of his participation in a previous project that involved painting signs. Whether it’s painting, spreading mulch or even cleaning up a stretch of highway, Williamson says she can always count on Cristian. “I just enjoy the work,” he says.

In recognition of his contributions and commitment to the organization, Cristian was named the 2016 Youth Honoree Wertheimer Fellow for Excellence in Volunteerism Award by the Community Foundation of Frederick County. With his award, he selected Kids These Days to receive a grant in support of its activities.

Williamson says that when she first began seeking community projects for the kids to help with, she encountered some hesitancy. “Let’s face it, there are some people who think kids these days are lazy and irresponsible,” she says. “But once they work with us, they call us back again and again because the kids do such great work.”

In between throwing shovels of mulch with the other members of the crew, New Market Middle School student James Martinez admitted that when the alarm went off at 7 a.m. that Sunday, he was slightly tempted to roll over and tell his mom he didn’t want to go. “But I like to work with anybody to help the community,” he says. “So I got up and said, ‘Let’s do this thing.’”

Although it often seems teenagers have their cell phones fused to their fingers, those who work with adolescents say that sometimes tuning out their immediate world actually helps them tune in to issues affecting the larger world in which they live.

“Technology presents lots of challenges and opportunities,” says Eric Phillips, supervisor of Accelerating Achievement and Equity for Frederick County Public Schools. He organizes the school system’s annual Martin Luther King  Jr. Day celebration which recognizes the outstanding achievements of students of all demographics from each of the county’s public schools. Whether it’s helping classmates fearful of their immigrant status or those struggling with poverty, Phillips says many young people are demonstrating that they “want to give back in a meaningful way and they are doing wonderful things.”

Ironically, however, some of what drives their volunteerism is the very thing for which they are often maligned: their use of social media. “Because of their news feeds, young people today have a heightened awareness of issues and a greater sense of wanting to help right wrongs,” Phillips says.

Ashley Kight, director of the Youth and Young Adult ministry at Brook Hill UMC, sees the same thing. “Young people today have issues in front of them all the time on social media,” she says. But she also knows that being engaged—or enraged—on Facebook is one thing. Working for, and with, families that have practically nothing can truly be life-changing.

“HOW CAN WE MAKE THINGS BETTER?”

Before the teens who volunteer for ASP leave Frederick, they spend hours of time preparing for the trip, engaging in exhaustive fundraisers to offset their costs as well as “tool time” training, when they learn how to operate circular saws, drills and the like.

Kight and her adult leaders work hard to make the preparations fun, which is certainly part of the reason she has so many teenagers return year after year to make another trip. But nothing can quite prepare them for what they will encounter in parts of America where the average per capita income hovers around $30,000 a year.

Although they were not on the same work crews, both Athey and Laramore worked on homes last year in rural Tennessee that had neither electricity nor plumbing. “Before they leave Frederick, the kids think they know what they are walking into, but then they get there and they realize that this is the first time they have seen poverty like that in America,” Kight says. “Then that’s all they can talk about, asking, ‘How can we make things better?’”

Over the course of seven days, she watches as the teens zero in on the work to be done. There is still lots of fun and laughs, but their focus changes. “Nobody wants to leave things unfinished so there’s always a huge push to get their projects done,” Kight says. Despite being tired, sweaty and sore, the teams coalesce around the work that needs to be finished, with the young people often stepping up to encourage everyone to stay on task.

Given the scope of the poverty and the extent of the work to be done, Kight says many of the projects simply cannot be completed in one week. And that can be hard for the volunteers when they come home. She says that she has had parents tell her that when their kids return from the trip, “They can’t stop crying about what they saw and experienced. They are more mature than when they left. They realize it’s not ‘all about me.’”

Whether fixing roofs in Appalachia, stocking the shelves at the Frederick Food Bank or tending to the residents of the animal shelter, there is no shortage of opportunities for young people in Frederick County to volunteer.

Although it’s true that there’s a percentage of young people who volunteer because they consider it necessary for beefing up their college applications, those who work with youth say regardless of their motivations, it’s hard to come away not affected by their volunteer experiences in some way.

Kight says she has seen many of her ASP teens return willing to accept leadership roles in their school clubs and organizations. “There’s a mindset change,” she says.

Many of these young people also indicate that they would like to mentor future generations of volunteers. “I’d love to be an ASP leader someday,” says Laramore. Helping the less-fortunate, she adds, “puts a lot into perspective. It’s a reward in itself.”

Kids These Days’ Williamson says that kind of attitude is common among her volunteers. It’s why she will advocate for the kids, even going so far as to call college admissions or financial aid offices to see what can be done to help these remarkable kids be able to attend college. Kids These Days also conducts fundraisers so it can offer scholarships to its deserving members.

But for West Frederick Middle School eighth graders Samantha Acri and Ella Krone, volunteering with Kids These Days is both work and play. “It’s just fun,” Acri says, as she joked with her teammates about their mulching skills. Although the early hours can be trying for these sleep-loving teenagers, they don’t shirk the responsibilities. “It’s a commitment,” Krone says.

“People don’t realize there are kids like this,” Williamson says.

Castillo agrees. He knows that he and his peers often receive a bad rap, that many label his generation as “entitled” or maybe even “selfish.” But with a maturity that defies his years, he shrugs and says, “I hear that talk but I guess I think there are always people who will misjudge others.”