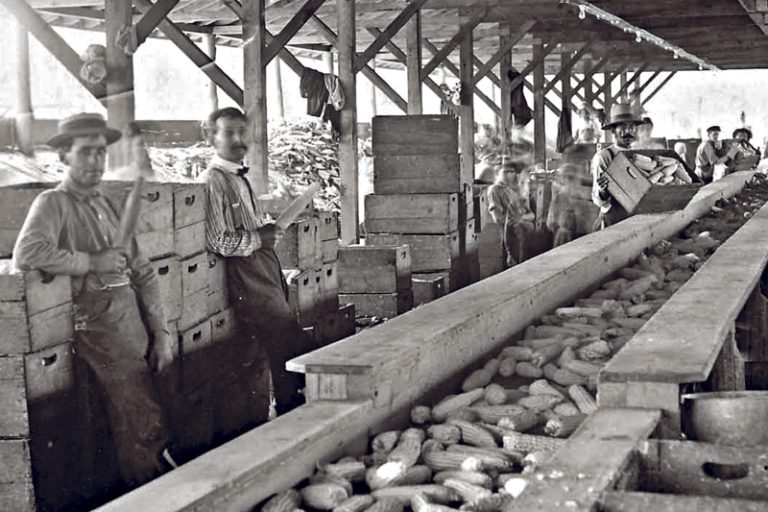 Story of Canning Factory’s Past Lives in Modern Office Building

As a teenager over summer breaks, Charles Ross IV worked in the filler area of the Monocacy Valley Canning Company. Watching as the cans swept in on a conveyor belt from another part of the building, he would make sure they were clean and properly lined up just before they were filled. Sometimes he worked during winter and spring breaks to get extra cash either helping out maintenance crews or painting.

The company, located on East Street, was founded by his grandfather, Charles W. Ross Jr. and Charles B. Staley near the turn of the 20th century with $500 borrowed from Charles W. Ross Sr. In the early 1900s, the company expanded to a second plant in Walkersville.

The company employed 500 to 600 residents and processed a variety of fruits and vegetables—corn and peas being the main exports. The book, Carroll and Frederick County Canneries, says the city plant produced about 200,000 cans a day. The combined annual capacity for both plants in 1913 was estimated to be 6.5 million cans sold nationwide. The central Maryland location was popular for canneries. From 1868 to 1968, Frederick and Carroll counties were home to around 75 canneries.

Ross recalls much of the intricate canning process through family stories and what he witnessed. In the 1910s, filled and sealed cans were placed in iron baskets that were lowered into steam kettles for cooking. Once finished, the baskets were loaded onto horse-drawn wagons to be driven around until they cooled off. Years later, his father took the horses out of the process and used a conveyor belt through a water trough to cool the cans before packaging.

With the county moving more toward dairy production and growing cattle feed, the cannery’s two locations closed in the late 1940s. Ross’ father spent about a year liquidating the company’s assets to pay off debts. “He was a concerned citizen,” Ross says. “He did not want people that he had dealt with for 20 to 25 years to have their [money] lost. He did the right thing.”

The building sat vacant but also hosted other businesses over the years. Local developer Bert Anderson bought the property in 1999 with adaptive reuse plans for an office building. Noelker & Hull Associates architect Thomas H. King was tapped to bring the historical structure into the present with a look to the future. Though in a dilapidated condition, structurally the building was extremely sound.

“It embodies an ambiance that you don’t find or easily re-create in new construction,” King says. “… One of the things that we try to do when we look at a building like that is allow it to be what it wants to be and not try to create a new look. We looked at the heavy timber construction, the masonry walls, the arches and tried to incorporate those into the architectural theme of the building.”

Crews worked to build the site up to current building codes, including installing sprinklers, a new fire alarm system and an elevator. “We tried to craft the new construction so that it did not detract from the architecture of the building,” King says. “The original building is still the dominant feature. The glass is still a negative space, if you will, that allows the contrast of the old and the new to be very obvious.” The new glass wings on the building were completed in 2013 with the first tenant moving in the following year.

As Anderson gives a tour of the 36,000-square-foot facility, he points to echoes of the past, like the still-visible company sign noting the large V in the middle of the logo and the three dots and dash in Morse code that meant “Victory” during World War II. One of the largest nods to the past is inside at First United Bank & Trust. Customers will feel like they’ve stepped into a museum, thanks to the large mural depicting historic photos and small descriptions of each part of the canning process. There’s even an interactive station where patrons can learn more about each photo.

Also on the first floor, construction crews are putting the finishing touches on the new DeLeon & Stang Certified Public Accountants office. Anderson points to the ceiling to show the original timbers still on display. Some now frame indoor office windows, as well. A conference room hosts a sliding door used by the cannery.

Brad Hoffman, who will lead the DeLeon & Stang Frederick branch, says the company will host its grand opening on Oct. 18. The office aesthetic was a joint collaboration. “The underlying design of our thought process for moving into the cannery was simply to make the statement that we are different from other accounting firms essentially,” Hoffman says. “That building is very unique, very well known and we wanted to come into Frederick and start with that being what we are known for— unique and different and open.”

With offices already in Gaithersburg and Leesburg, Va., the Frederick branch completes a triangle around the region for the firm. Many of the staff also lives in Frederick. “We are looking forward to being able to be part of the community … and be active with the Downtown area,” Hoffman says.

Founded in 2011, Tribe Design and Branding moved into their space in the cannery in October 2016. “We were looking for a blank canvas,” says Seth Sirbaugh, principal. “Once we got in the building and we saw the history here, it was pretty cool for us to walk into a space that was rehabbed and had a lot of history and we were going to make something new in it. There was something really nice about that.”

The multidisciplinary branding and design firm has a wide range of clientele, including corporate, government and retail clients. Located in a corner office, about 50 percent of the wall space is windows. “Not only are we smack dab in the middle of Downtown and easily accessible to everything Downtown, but also our clients can jump right off [Interstate] 70 and get here,” Sirbaugh says.

Ross is excited by what is happening at the building. “[Anderson] is so meticulous in not only wanting to preserve the building but have the tenants really realize what they are working in and to appreciate it,” he says.