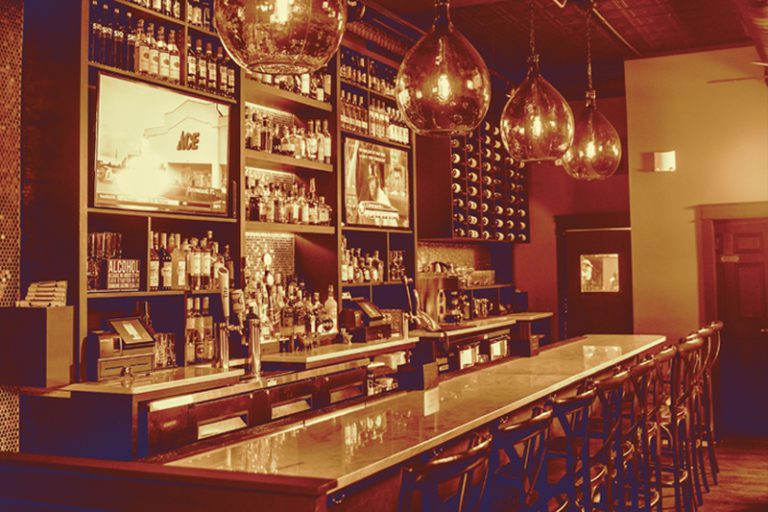 With a Variety of Offerings, Downtown is a Destination for Foodies, Tourists, and Dollars

On a rainy cool Saturday in early September, a group of eight out-of-towners dutifully followed Jessica McHugh as she led them through the streets of Downtown Frederick. The tour group paused briefly in front of traditional icons of Frederick tourism such as the National Museum of Civil War Medicine and the churches that define the city’s famed “Clustered Spires.”

But this group wasn’t hungry for history. They were hungry for Frederick fare.

During her three-hour tour, McHugh, an experienced guide for Taste Frederick Food Tours, treated her guests to an entertaining, enthusiastic and tasty expedition to some of Frederick’s most popular restaurants and food shops.

The group stopped and tasted at Pizza & Pretzel Creations, the North Market Pop Shop, Brewer’s Alley, the Wine Kitchen, Firestone’s Market on Market and Zoe’s Chocolates. At each location, McHugh shared some background information about the business and explained a little bit about what the guests would be sampling.

At Zoe’s, she talked about the local honey that went into the baklava they tasted and boasted that guests at the Emmy Awards, the White House Correspondents’ Dinner and the G-8 Summit have all been treated to chocolates from Zoe’s in Frederick, Maryland.

As they licked the last smudges of chocolate off their fingers, it was obvious the group thought the tour was a delicious success.

In the 20 years since John Fieseler became director of the Tourism Council of Frederick County, he has watched the city become as well known for its food offerings as for its Civil War history. “It used to be that if I went somewhere else in the country, if people had heard of Frederick it was because of Barbara Fritchie,” he says. “Now, it might be because of VOLT or Flying Dog.”

As a result of Frederick’s growing reputation as a mecca for restaurants, specialty food retailers and craft breweries and distilleries, Fieseler’s peers around the state tell him they are envious of the great food scene in Frederick. “It is definitely a reason people are choosing to come here,” he says.

That includes both tourists and entrepreneurs. Keith Campbell-Rosen recently relocated The Spice & Tea Exchange from Georgetown to East Patrick Street in Frederick. “I was looking for a new space and I got the good advice to take a look at Frederick and it just turned out to be perfect,” he says.

He knew the city was gaining a reputation for its dining scene and now that he’s settled in his new space, he’s not looking back. “Business has been great,” he says. “We have been really well received.” He credits much of his early success to the fact that people who come to Frederick to dine at a new or favorite restaurant are more than likely willing to try other new things as well. When they see a new business such as a specialty food shop like his, their curiosity is likely to be piqued.

Maggie Lebherz and her husband Josh Russin capitalized on that trend. They were trailblazers eight years ago when they opened Lebherz Oil & Vinegar Emporium, their specialty olive oil and vinegar store on North Market Street. “At the time, we were the only niche food shop in town,” Maggie recalls. “We heard lots of, ‘This is never gonna work.’”

But they ignored the skeptics and are one of the 20 percent of small businesses across the country that still operate beyond the first 18 months.

Lebherz’s success can be attributed to vision, creativity and a little good timing. “When I first opened in 2010, Frederick was really beginning to make its place on the map for its dining culture,” she says. And as the dining options have increased, so, too, has her business. It also helps that Lebherz and Russin, assisted by her mother, Marybeth Lebherz, have seized on every opportunity to engage in creative marketing.

In addition to promoting their business on social media and through a monthly newsletter, they were also eager participants in Downtown Frederick Partnership’s Cooking Schools, which showcased the goods and services of local merchants and restaurants. And they’ve now recently added demonstration space in the front of their shop so they can partner with other businesses to cross-promote each other’s products.

They’ve collaborated with the Common Market to use locally sourced produce and Lebherz’s vinegars to pickle cucumbers, onions and garlic. There was a class on how to make “shrubs,” a Colonial-era drink that mixes vinegar with fresh fruit and sugar, and another session on how to complement local Hippy Chick Hummus with olive oils and vinegars.

Those who have watched Downtown Frederick’s renaissance believe that Bryan Voltaggio’s appearance in 2009 on Bravo’s Top Chef sparked curiosity about the celebrity chef’s hometown. “I think that started to bring people from places like Montgomery and Loudoun counties,” Fieseler says. “The timing was good for us because we already had a lot of critical mass by that time.”

When visitors realized they probably should have gotten a reservation if they wanted to dine at VOLT, they quickly discovered that Frederick had lots of other choices and word started to spread.

Sherif Salem and Cherie Nearman admit they were not aware of Frederick’s burgeoning reputation as a foodie hot spot. The couple had worked in the food and hospitality business for years in the D.C. area, and as a result, Nearman says her husband promised her they’d never open a restaurant together.

But then they discovered Frederick. They were taken by the charm and energy of the Downtown area so when the building at 49 S. Market St. became available, they quickly forgot that promise. “It almost seemed too good to be true,” Salem recalls of the property and the location.

They bought the building in 2015 and immediately began making plans to open a restaurant with a creative menu that would offer choices and price points to appeal to a wide variety of ages, budgets and palates.

Since opening two years ago, Hootch & Banter has drawn a loyal following of local diners as well as fans from D.C., Bethesda and Baltimore. The eatery was named Best New Restaurant in Frederick Magazine’s 2016 “Best of Frederick” competition and business has been so good that the couple is in the process of expanding by opening a new lounge on the second floor.

Despite being the “new kids on the block,” Salem says neighboring restaurants have been nothing but welcoming and supportive. He says it’s not uncommon to get a request from a nearby eatery for extra eggs or for help in times of crisis. He recalls how his restaurant and its neighbor, The Shuckin’ Shack, ran out of ice during In the Street last year. “Next thing I know there’s a pickup truck full of bags of ice at my back door,” Salem says. “Not only did [a Shuckin’ Shack employee] run out to get some for himself, but he bought some for us, too.”

With its variety of dining, tasting, touring and specialty food shops, Frederick is now a mecca for the rapidly growing culinary tourism market. Although Fieseler does not have specific data on people who come to Frederick specifically for culinary reasons, visitors to Frederick County in 2015 (the most recent year for which data is available) spent $391 million, with the largest segment—$105.5 million—spent on food and beverage.

Research by the World Food Travel Association indicates that culinary tourists span a range of ages and desires, and Frederick seems to have something for all of them. Millennials looking for local, sustainable and organic experiences can enjoy the offerings of places like Glory Doughnuts and Hippy Chick Hummus, while baby boomers can find small group “behind the scenes” experiences like Lebherz’s demos where they can learn something and immerse themselves in an experience.

Campbell-Rosen, of The Spice & Tea Exchange, says the majority of his customers range in age from 25 to 55. His older customers are willing and able to spend their disposable income on his products, while younger ones like the idea of discovering something novel, such as the new line of chocolate and spice products he is creating in conjunction with Frederick-based coffee and cocoa bean roaster ChocoSombra.

Visitors to Frederick can now source an entire dinner in a two-block area: lemon-garlic linguini from the Pasta Palette; blood orange-infused olive oil from Lebherz; and fresh parmigiano Reggiano from Crisafulli’s Cheese Shop. Stop at Zoe’s or the Perfect Truffle, Cakes to Die For or Angel Cakes for dessert and, voila, dinner is served. “Just like they do it in Europe,” says Marybeth Lebherz.

Although Amber Kettmann lives in Annapolis, she was aware of what she calls Frederick’s “artsy, foodie vibe,” and wanted to take her parents, Greg and Cathy Kettmann of New Hampshire, on a Taste Frederick Food Tour.

As they finished up their chocolates at Zoe’s, the Kettmans, along with some friends from Fredericksburg, Va., raved about their culinary tour. “I loved it,” said Greg Kettmann. “We really enjoy these immersive experiences. And we’ve already made a reservation for dinner.” For Amber, part of the fun was stopping at places she might never go to otherwise, like the North Market Pop Shop.

Sarah Kurtanich, founder and owner of Taste Frederick Food Tours, says the Kettmans are typical of her customer base. About half are from the local area, while the other half are from farther away.

“I often hear people say that they have driven by or through Frederick but are surprised by the size and how much there is in this small area,” says McHugh. She has given tours for bachelorette parties, for Mother’s Day, Father’s Day and Girls’ Night Out. She even led a tour for the members of a women’s yacht club from D.C.

Over the course of the tour’s 1.5 miles, McHugh tries to point out restaurants and food retailers that are not on the tour (it is only three hours long, after all) as well as other community highlights, such as Carroll Creek and Frederick’s interesting architecture. That means that visitors like Amber Kettmann and her parents can savor a more complete, if not literal, taste of Frederick.

“People are usually very impressed and can’t wait to come back,” Kurtanich says.

Campbell-Rosen hears the same from some of his Georgetown customers who have visited him in his new digs. “They say they were sorry to see me go but tell me they really enjoy Frederick,” he says.

Maybe part of that stems from the fact that even though the historic district now has nearly 40 restaurants and almost as many food-related retailers, the proprietors of these businesses see each other as allies instead of enemies. “On Friday and Saturday nights when we have an hour-and-a-half wait for tables, I often suggest people take a walk, shop and get a drink at La Paz or the Wine Kitchen or The Tasting Room while they wait,” says Hooch & Banter’s Nearman. “We are all about people loving Frederick.”