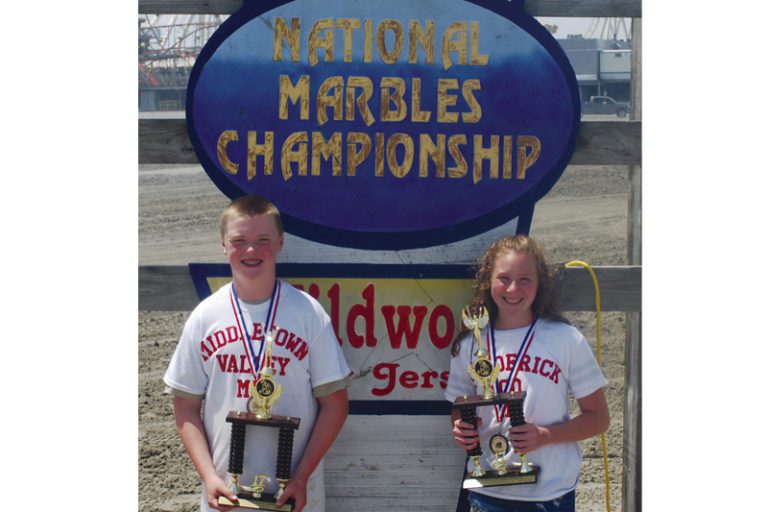 Mibsters Shoot for the Moon In Middletown and Beyond

At Coblentz Park in Middletown, a cluster of 14-by-14 blue-and-tan concrete squares are the home turf, of sorts, of a championship marbles program. What really matters for players who belong to the Frederick County Knucklers are the 10-foot rings inside the squares, the playing surfaces where players learn the lost art of marbles.

Two signs in the park summarize the Knucklers’ raging success: 13 national champion players, starting in 1992. The most recent local national champions won in 2014—Marilyn Fisher on the girls’ side, Dominic Rudakevych for the boys.

In this outdoor arena, Frederick County is inextricably tied to marbles, a game that harkens an era of simple toys and outdoor play. The object is to use a shooter marble to hit and knock other marbles out of an inner ring. Two opponents take turns, accumulating points in innings, until there’s a winner.

Jeff Kimmell, a 1981 national champion, started Frederick County’s program in 1990 as an after-school activity under the county’s parks and recreation system. The rings at the park came two years later.

Art Staus has been running the program, for children 8 to 14, during the last eight years. His son, Jeff, finished second in the 1996 national tournament. Staus remembers his son, a football player, keeping his hobby largely hidden while in high school, until he spoke about it on stage during a Mr. Middletown competition.

The first national marbles tournament was in 1922, according to a history of the game that Staus provides. It was a promotional tournament sponsored by Macy’s department store in Philadelphia. Since 1960, the national championship has been held almost every year in Wildwood, N.J., a coveted trip for Frederick County’s marble players, or mibsters.

This year, Ella Machen went to the national competition for the third time. Her friend Lauren Young, who got Ella interested in marbles, competed in New Jersey for the fifth time. Lauren finished third; Ella was further back in the pack.

Lauren says it’s fun to hear her name called over a PA system, then play marbles for several hours. “A couple of weeks before the tournament,” she says, “I practiced every day.”

On a Sunday evening, Ella, Lauren and several other mibsters gather at the park for fun and practice. During a game, Ella gets her head down around ground level, aims at a spot in the ring and fires. Her shooter zips between a few marbles, missing all of them, a smidgen off target.

Lauren responds strategically. There is less power behind her shot, more finesse. Her shooter smacks a marble out of the ring. The shooter spins and stays in the center, earning her another turn.

“The whole idea is controlling your shooter,” Staus says. A novice will curl his hand and flick his shooter with his thumb, with little additional thought. An advanced mibster does more. As 2002 national champion Jonathan Hulse explains, it requires a tight grip—a shooter resting on a thumb, an index finger snugly wrapped around it. The mibster rolls and twists the shooter against the curled index finger before releasing it, giving the marble back or side spin. “Really, it’s a lot of hand strength,” says Hulse, who belonged to the Knucklers but represented Washington County when he won his title.

The pursuit is a little like billiards, figuring out not just what happens when marble smacks marble, but what shot and angle you want next.

The unnatural, cramped hand position and the friction between fingers and marble are uncomfortable. Lauren and Ella hold up their hands to show an irritated splotch near their thumbs; they’ve gotten used to it. “You lose the skin,” Hulse says. “It peels off. Then, you get a callous.”

The right start and proper shooter technique was tough for Hulse to conquer as a boy. “It took me three months just to learn how to hold it,” he says.

In July, Hulse came back to the Middletown park when he heard that Staus started a weekly evening gathering. Hulse offered his expertise to young players receptive to instruction.

Hulse was 13 when 2001 national champion Tim Ratliff of Smithsburg invited him to try marbles. Hulse stuck with it and worked hard to get better, eventually practicing four to six hours a day. He said he crammed five years of learning into one.

The $2,000 scholarship that came with his national title helped him through Hagerstown Community College. He went on to get a biology degree from Frostburg State University. Hulse’s younger brother, Jeremy, was a natural. Jonathan says Jeremy “barely practiced” and won the national tournament in pouring rain in 2003, his first time competing.

Jack Kosch, who is going into sixth grade at St. Thomas More Academy in Middletown, gave it a shot at the national tournament this year. He finished fifth, a great improvement from the year before. When Staus came to his school a few years ago to talk about marbles, “I thought it was really cool,” Jack says.

Staus says that’s how he spreads the word—talking to several hundred kids a year in various settings, hoping a handful join the club.

He emphasizes that Frederick County’s marbles program is successful, but not pressurized or cut-throat. No one is shamed for missing a practice. Sportsmanship

is paramount—opponents always shake hands after games—and rewarded highly. The program is free. The club relies on donations from local groups such as the Lions and Ruritans. “I give away a lot of marbles each year,” Staus says.

Amanda Young says Staus and the marbles program have been a positive influence on Lauren, her daughter. “When Lauren was little, she was pretty quiet and shy. She has a learned a lot of people skills.”

“In my opinion, it’s such a wonderful thing for kids to do,” says Veronica Kosch, Jack’s mother. “It doesn’t involve electronics.”