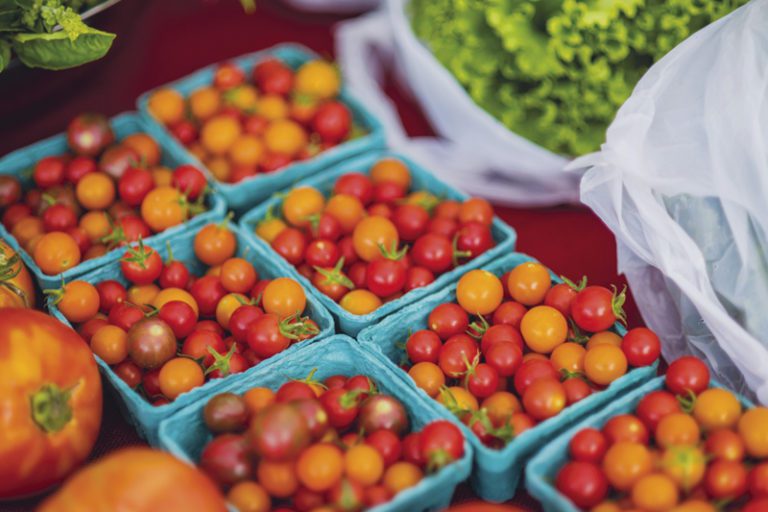 County’s Growing Farmers Markets Offer a Feast for the Senses

From apples that are, well, candy apple red, to bright green Swiss chard, neon orange pumpkins and russet pears, it seems every color known to autumn can be found at a local farmers market. There are the aromas of foods being cooked, the tastes of the delectable samples, the sounds of neighbors greeting each other and the farmers, and the feel of that crisp apple as you crunch it against your teeth.

And just because fall is almost here, it doesn’t mean farmers markets are winding down. When the kids go back to school, farms offer some of their best produce of the season. In September, corn, tomatoes, summer squash and green beans are still producing, along with some of the early fall crops, like butternut squash, beets, sweet potatoes and cauliflower.

Farmers markets have been a part of Frederick County for over 35 years. One of the early, if not the earliest, of the modern-day farmers markets started on Baughmans Lane in 1991, says Rachel Armistead, co-owner of The Sweet Farm in Woodsboro and vice president of the West Frederick Farm Market’s board of directors.

Back then, Frederick County agriculture was chiefly known for its dairy farms. But since then, more small produce farms have been established in the county. Farmers markets, Armistead says, “are a great way for us to promote our products. … When you go to the grocery store, you buy a jar off the shelf and you don’t know whether you will like it. At a farmers market, you can sample it,” she says. Many Sweet Farm customers were introduced to its sauerkraut through samples at markets. “They may not have liked sauerkraut in the past, until they tasted ours. It allows us to showcase our products. We want our customers to be happy with what they buy.”

The West Frederick market started as an informal group of farmers selling out of the back of pickup trucks on Baughmans Lane. Later, the farmers set up stands in the parking lot of United Healthcare, and this year moved to the Frederick Fairgrounds. Despite the move to Frederick’s east side, vendors have decided to keep the original name for now.

Each Saturday, about 30 vendors set up in an expansive, grassy area. There’s plenty of parking for farmers and consumers, and if it’s a nice day, the market is a pleasant walk or bike ride from Downtown Frederick.

The key phrase here, as in all farmers markets throughout Frederick County, is local food.

The Everedy Farmers Market, on East Street at Everedy Square every Thursday afternoon through October, has also been around for a couple of decades, to the delight of Downtown residents. Robert and Anna Hankey, who moved to Frederick in January, walk over each Thursday from their home on Second Street. “We love locally grown food,” says Robert. “We also patronize the restaurants that use local food.”

“You can tell the difference in the way the food tastes,” added Anna. On a recent late summer afternoon, the Hankeys were in the market for some yellow squash, but they were looking forward to the promise of fresh greens, beets and other root vegetables in the fall.

Some of that produce was making its first appearance at the market. There were crates

of cabbage heads the size of bowling balls. Bags of chard and collard greens brought visions of sautéed greens and hearty salads. Beets were the color of earth, not washed clean of the soil that nourished them.

Jim McSherry biked over to the Everedy Square market from his home on Second Street. “My sister’s preparing supper and had no onions,” he says. McSherry hadn’t visited the market before, but he was happy that he could get there in less than five minutes by bike. “I’m very glad they’re here,” he says. “I kind of knew it existed, but I couldn’t remember when it was open. I will come back.”

The Everedy market doesn’t have as many vendors as it once did. East Street traffic has made it less convenient for farmers. But Rich Calimer, of Scenic View Orchards in Sabillasville, is a staple there. He grows just about every local fruit and vegetable on his farm. He expects to have corn through the first frost, tomatoes into November with the help of high tunnels, apples, pears, broccoli, sweet potatoes and freshly made apple cider.

“I know a lot of my customers by name,” Calimer says. With the help of his nephew, his produce is featured at eight farmers markets each week. “You develop a relationship. I can tell you a lot of the times what they’re going to buy.”

“For farmers, that is a huge boost to their business”

Farmers markets give people the chance to meet the farmers, and to learn what goes into growing the food they’re buying. “We always try to encourage folks going to farmers markets to interact with the farmers,” says Amy Crone, executive director of the Maryland Farmers Market Association. “They can learn what pesticides are used, or not used. You can’t do that in a grocery store.”

Farmers markets provide Maryland with $52 million in sales annually. “For farmers, that is a huge boost to their business,” Crone says. “They are not going through a wholesaler, so they retain a larger percentage of the dollar and get the most money for their effort.”

Farmers on average receive only 15.6 cents of every food dollar consumers spend on food, according to the U.S. Department of Agriculture. More than 80 percent of money spent on food goes to marketing, processing, distribution and wholesale and retail sales.

At farm markets, Crone says, farmers typically retain nearly 90 cents on each dollar they take in.

The markets give people a way to connect with farmers without having to go to the farm, Crone added. In our urban/suburban society, many people don’t get a chance to see their food within hours of harvest, and these markets help change that.

One of those is the Middletown Farmers Market, which sets up each Thursday afternoon at the Christ Reformed United Church of Christ parking lot. There, Tina Siegel talks about her farming venture in the shadow of South Mountain. Siegel has converted a few acres of her fiancé’s pasture in Bolivar into a produce farm, where she raises vegetables without pesticides and free-range chickens for eggs.

The farm, called Picket Fence, has a two-fold meaning. “We’re picketing bad food and bad farming principles,” she says. “Picket fence is also an all-American symbol, the American Dream. We need to be much more mindful of our farming practices. By supporting local farmers, you’re supporting your local environment. We’re also meeting people when we normally only talk to animals.”

Along with the corn, tomatoes, zucchini and other summer vegetables, Siegel is growing kale, collards, turnips and pumpkins to sell this fall.

John and Marcia Bowers, who live on Mountain Church Road near Middletown, sell produce and eggs from their small farm, Poplar Spring Acres. Marcia retired a few years ago from the Braddock Heights Post Office. “The farmers markets are great for me socially, because I get to see everyone again,” she says.

Next to the Bowers’ stand is John R. Bergeron, who sells Simply Shaker Oval Trays. The trays are his hobby, and he makes them in his home just a few blocks from the market. He uses thin wooden strips to form the edges and the base of the trays, and tops them with polished wooden covers. Bergeron doesn’t sell a lot of trays at the market, but he gets lots of orders from people who learn about his work.

Josh Lewis manages the Middletown and Myersville farmers markets. (Myersville’s market is Saturday mornings on Main Street.) At the Middletown market, Claudia Prather looked over Lewis’s selection of honey and asked, “Is this local?” Lewis assured her that the honey was produced by bees raised on Spruce Run Farm, the Wolfsville farm run by Lewis and his partner, Kenny Trumpower.

“We grow a little bit of everything,” Lewis says. This fall, he will feature lima beans, kale, collards, broccoli and more. Lewis and Trumpower were inspired to start selling their jams and jellies after a visit to the Middletown market in 2010. “I personally love farmers markets,” he added. “I’ve never been to a farmers market that I didn’t like.”

Jan and Ray Wickline have a 6-acre farm just west of Middletown. They sell their own produce and bring in apples from a partner farm in Biglerville, Pa. The partnership helps the larger farm get a new avenue to sell its product, while the Wicklines can add the apples to their selection of homegrown produce. This fall, they’ll produce lots of applesauce from some of the apples, and from that make homemade apple butter.

The Middletown market also offers an array of food trucks, where residents can pick up dinner on their way home from work. Prepared food is also a staple at the West Frederick market, where bagels, sticky buns, soft pretzels and kettle corn were arranged in mouth-watering displays. Wine samples from Knob Hall Winery are another plus.

John Sexton, the West Frederick market manager, sells a variety of meats from his Shagbark Mountain Cattle farm in Knoxville. West Frederick’s new location at the fairgrounds seems to be attracting more people than in past years. The grassy location is cooler, too, he added.

Katherine Phillips, also part of the market’s leadership, sells native plants she grows at her home near Burkittsville. “Chokecherry, witch hazel, viburnums,” she says. “I tend to grow things that aren’t in nurseries.” Fall is a great time to plant native shrubs, which are easy to acclimate, she adds.

Tammy Biser, of Biser Farms in St. Thomas, Pa., just started selling artisanal cheeses at West Frederick in April. “We do very well here,” she says. “Frederick is a city we want to do more business in, and this is a great way to break into this market.”

More about Frederick County’s farm markets is at www.homegrownfrederick.com/farmers-markets. Most markets have individual websites that can be found through a search.

More about the West Frederick Farmers Market, now at the Frederick Fairgrounds, is at www.westfrederickfarmersmarket.com.

More about the Middletown Farmers Market is at www.middletownmdfarmersmarket.com.

More about the Maryland Farmers Market Association is at www.marylandfma.org.