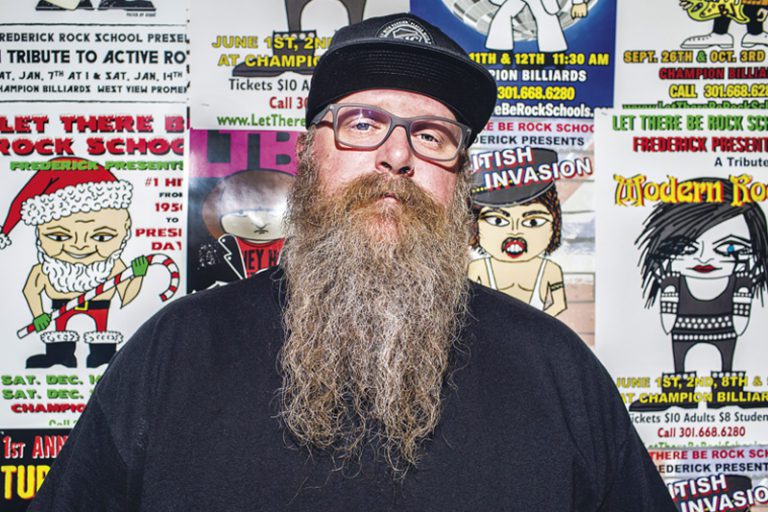 In the overall path and trajectory of his career, Scott Marceron sees little logistical change from his early years as a touring musician. He still spends days and weeks traveling the country in the back of a van, still shares hotel rooms with rock bands full of vaguely washed musicians who dream of rock-stardom, still leads a nocturnal existence, and still loves it all.

This time around however, Scott is not the towering and bearded bassist of one of Frederick’s loudest and most gloriously heavy bands (Shaft, a band still spoken of today in those corners of the music scene where volume and the love of it are still extolled). Instead, he is the towering and bearded manager of rock bands and owner/operator of two successful businesses, Let There Be Rock School and Outerloop Group, a record label and artist management company.

When I caught up with Scott, he was touring with Bad Seed Rising, a band that emerged from the rock school here in Frederick that includes his own son on drums. He keeps the band and the van running on time, advances the gigs by making sure everything is as it is supposed to be, attends to the money and keeping the wheels spinning smoothly on tour.

You started out as a musician, playing in Shaft. How did you become an artist manager and business owner?

Where are you right now, as we speak?

That’s a lot of road to cover. What is touring like these days compared to when you were touring in Shaft?

“You’d think it would be insane like the old days, but these kids are always tuned out and on their phones. The road these days is pretty quiet inside the van. In my day, it was a bunch of partying. This? This is the total opposite to that.”

What are these kids like, compared to when you were that age touring and playing music?

“Like any band, some guys are more serious, some less. It’s really the same stuff as ever. Nothing there has ever changed. Those things never change. Personalities are what they are. But, Bad Seed Rising … they’ve been together for five years, writing songs and doing shows. I trust these kids. They’ve been doing this since they were young teens and they act more mature than most adult musicians. The school has allowed these kids to come in and truly prepare to do what they have to do as pros. It shows, too.”

What are some of the challenges of working with musicians who are teenagers?

“The biggest challenge for this band is getting audiences to take them seriously because of how young they are. Once they hear them, they understand this is the real deal and not some gimmicky band.”

Describe a typical day for you.

“Before everybody crashes for the night, I tell the band what time bus call is. The next morning, I wake everybody up and get them into the van. If we have time, we grab breakfast or lunch and then we’re in the van for three of four hours, typically. … I dive into emails and conference-calls doing other stuff, dealing with the school and my other clients.”

Meanwhile, back in Frederick, your wife, Kela, is the business lynchpin.

“My wife and I run the back end of Let There Be Rock School, and with 250 students it’s a full-time job for both of us. …Kela [Marceron] is ‘on it’ day to day. Kela does everything really well. She blows me away. She takes care of our other four kids  and manages the school day-to-day. Her being there every day is why it works. She’s the reason I can do the management stuff I like to do.”

So, let’s get back to our typical day on the road.

“Right, so once we get there, we load-in at the club, I find out all the logistics, get everything set up, sound-check and then we have about three or four hours between sound-check and show time, so we all go get something to eat. I do emails and phone calls right up to show time.”

“Get paid, dude. And if we’re staying in that city, we get a room, cram all of us in one room and get some sleep. Sometimes, with a long drive, we get in the van. It’s like Groundhog Day every day.”

Any advice for young musicians?

“Get it. Get as involved as you can with your instrument. Play with as many people as you can. Never stop learning. Knowing three chords and a Green Day song isn’t enough. If you want to be in the biz, you have to understand that there are thousands of other people who are working harder than you.”

What do you think of the music scene in Frederick?

“I’m up with what’s going on and what’s happening, who’s coming up, etcetera, and I think the scene is great. Lots of eclectic artists coming up and lots of great singer/songwriters coming up, too. Kids are still renting halls for all-ages shows, also. That’s part of a scene too, you know? Renting church halls and putting on shows. That’s how Shaft first started, by doing it ourselves, and it’s a great way to build a buzz.”

Do you miss being home?

“Being away from my family is the kicker. That’s the tough part of it. We have five kids and only one on the road with me. It’s a big decision for us. We’ve been married for 21 years and she watched me go from a musician touring around to moving into the biz side of things. So when this happened for Aiden, she said, ‘Well, you have to be with him.’ We work well together, bottom-line.”

Aiden, the drummer for Bad Seed Rising, is your son. You’re his manager and also his father. How does that work?

“It feels pretty incredible. He wanted to do this from an early age and we never had to tell him to practice. He wants to play and travel, and it’s pretty special. We’ve been in every state together except Hawaii and Alaska, playing. … I admire his hard work and passion. He’s a 15-year-old kid and a pro musician on a major label, it’s pretty mind-blowing.”