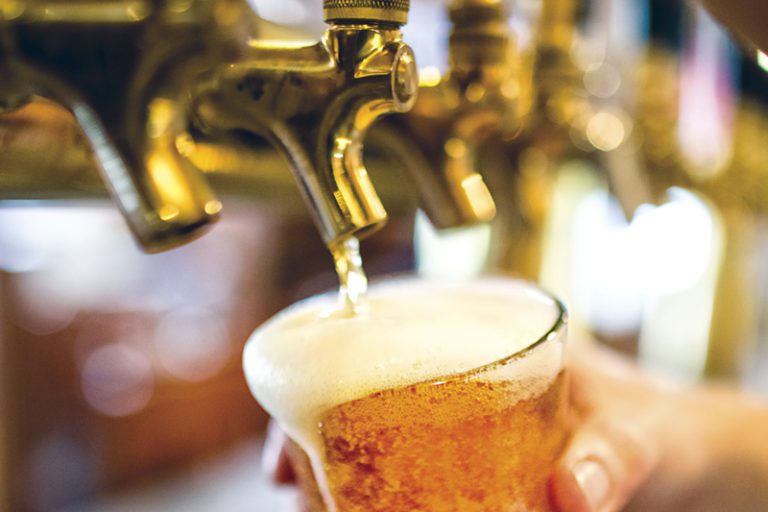 Artisan Brews and New Menu Shine at the Roasthouse Pub

Food might bring people together, but beer can make the gathering interesting. In this spirit of lighthearted camaraderie, new owners of the Roasthouse Pub, Mary Custer, owner/operator, and Niko Negas, executive chef, bring the brew-food relationship to a whole new level. Opened in 2011 by the Belles family, the Roasthouse Pub is an unassuming little place. It looks like a homey remnant of bygone days, caught between sprawling car lots and big box stores on Urbana Pike. If the place isn’t on your radar yet, it might be because it’s easy to zip by, shrouded by swift traffic and sun blazing off glass and steel. But just make a U-turn and circle back to see how substance trumps glitz. Good things do come in little packages.

Custer and Negas made the Roasthouse their own when the Belles’ decided to focus on other businesses (Belles’ Sports Bar & Grill, Green Valley Carryout and The Cellar Door). They took over in 2015, completing the paperwork in early 2016. Chef Negas earned his culinary degree in Baltimore, but his resume starts with dish washing at Urbana’s old Blue Fox Inn before moving on to The Turning Point and Peter Pan, ultimately opening his own business, Cornerstone Catering.

Custer elbows him, teasing, “You started cooking before double digits, according to your mother.” Their mutual respect is clear as Custer continues, “He is so passionate about food and creating. … No matter what ingredients I throw at him, I’ll always get something better.” Negas is earnest, insisting that truly pleasurable meals should look, taste and feel good.

The most recent changes are food-related. The core menu is two pages of thoughtfully engineered dishes that use locally sourced ingredients whenever possible. Weekly specials start on Thursday. Features always include a signature burger, soup, handmade pie, cheesecake and a bread pudding variation, but don’t expect anything pedestrian. Iceberg “salad” and ordinary French fries are passed over for dishes made with quinoa, creamy goat cheese, blackened salmon, duck pastrami or roasted sweet peppers, then colorfully accented with seasonal fruit. No arm-twisting needed to eat vegetables here. There are vegetarian/vegan options, too.

The mouth-tingling jerk chicken tacos are a favorite of both Negas and Custer. Three flour or corn tortillas are stuffed with seasoned chicken, Monterey jack cheese and cool greens, topped with a potently authentic sauce and accompanied by mango pico de gallo. Inspired by a trip to Jamaica, the chef convinced a local cook to share her family’s recipe. He admits, “I toned down the hot peppers a little bit.” It’s a perfect example of Negas’ penchant for bold flavors.

But don’t forget the surf. “I think our crab dip is the best,” says Negas. It’s a browned, bubbling pot of colossal crab in creamy, cheesy lava, served with ciabatta and Old Bay dusted flatbread. He grins, “And our crabcake gives [any preparation] a run for the money.”

Diners have noticed the changes and have given their approval. “We have people who come here every week to see what’s new,” says Negas.

Then there’s beer. Roasthouse is a connoisseurs’ paradise. Recently added high-tech digital signs show the maker, moniker, description, alcohol content, origin and price, with keg icons to show how much is left in stock. The program is linked to a free interactive app called Digital Pour. Fans can post pictures of favorites and track supply from anywhere in the world, so they know when to rush back. Options change regularly. There may be a small-batch milk stout from California or a Virginia-made coffee IPA. When those run out, look for a dry-hopped ale from Baltimore or barrel-aged barleywine by a craft brewer in Utah. There are 21 on-tap options. Tasting flights of two, four or six beers let patrons explore the variety. Happy hour is Monday through Friday from 3-6 p.m.

The 21st tap is new. It’s an old-world cask system. Unlike modern tap lines (which add carbonation), it has natural carbon dioxide, is not chilled and must be pumped from the barrel. Chef Negas envisions creating a leather-bound “anti-wine” list for rare vintages and barrel-aged stouts, as supplement to his periodic five-course beer dinners. Local brews are represented, too:  Flying Dog, Antietam, Old Mother, Steinhardt, Smoketown and Red Shedman, and even Tenth Ward Distilling spirits.

“Our entire staff is very knowledgeable and hard-working, very passionate, too,” says Negas, acknowledging how that rare good fortune can make or break a restaurant as much as the food. They tap into that shared passion for fundraisers and culinary competitions, such as hosting the annual charity Beer Bacon Music Festival’s two-ton bacon bar or garnering awards at the Mason-Dixon Master Chef Tournament to benefit Meals-on-Wheels.

Overall, the Roasthouse Pub is a dichotomy of sorts, from its convenient-but-easily-overlooked location to its posh food in an uber-casual setting; where humble beer, a drink of the common folk, is elevated and celebrated. For patrons seeking a mix of big taste and little drama, Negas says, “We’re here to help end that chase.”