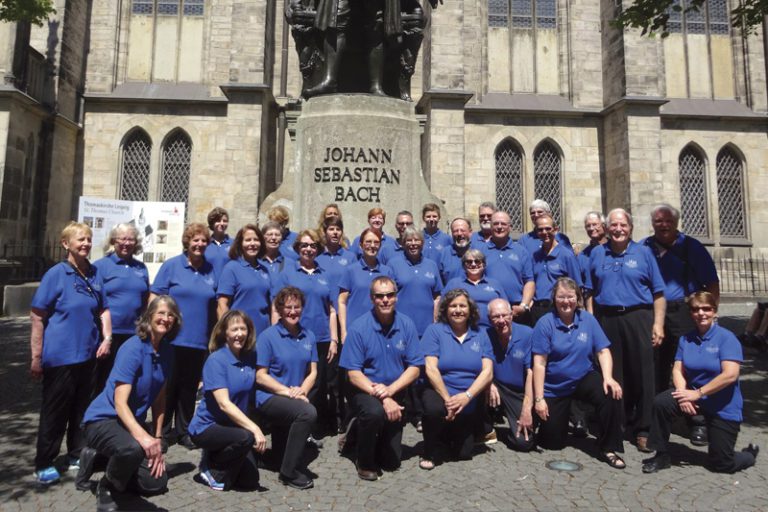 40 Years of the Frederick Chorale

“The performing arts are very much an adventure; it keeps your mind open to new experiences,” says Douglas Cox, director of the Frederick Chorale. Recently returned from a performance tour of Germany and in the midst of celebrating their 40th anniversary, Chorale members can attest to decades of adventure, whether it’s tackling an especially complicated piece of music or being part of the choir family.

“We have a tremendous amount of respect, appreciation and love for each other that has included supporting each other in times that are both joyous and sad,” says publicity chair Dayna Lane. “As a group we have participated in weddings, sung at the bedsides of members who are sick or dying and at their funerals. Music is powerful and making music together even more so.”

Cox, in his sixth year as director, saluted the “energy and vision” of founding director Nancy Roblins as well as the group “that decided to keep going and figure out how to get by without their founder. They had to learn to do things for themselves.”  The Chorale, made up of 50 active musicians, performs three concerts a year in Frederick and one outside the city—this year it’s Catonsville—as well as occasional international tours.

For Chorale president Linda Myers, a concert on Sept. 15, 2001, still makes her emotional.  The choir was working with a U.S. Air Force singing group for a presentation at the Weinberg Center when the terrorist attacks hit on Sept. 11. “We didn’t know if service members would be able to attend,” she recalls, but they did and “we had an overwhelming crowd. Everyone came together. It was probably the most powerful experience we had as a group.”

Tom Pryor, a founding member who still sings in the Chorale, recalls how 40 years ago the Frederick Orchestra wanted singers for a performance. “There were more people in the orchestra than singers,” he says. “In our first public appearance we were known as an ensemble with the Frederick Orchestra.” Pryor joins the chorus of those acknowledging the leadership of Roblins and her vision as well as echoing the closeness of the group. “I met my wife there. Several marriages have been made in the Chorale,” Pryor says, including Myers and her husband.

Pryor describes the Chorale as a learning experience. “Every Sunday is a music lesson,” he says of rehearsals. Fond memories are also part of the mix, including the string of Madrigal Feasts they once staged. The first feasts were at the former Mealey’s Restaurant in New Market. “The ladies researched and went into great detail” to have food that was authentic to the Middle Ages, he says, even though “Mrs. Mealey included her succotash” to the menu.

The group’s most recent adventure was a trip to Germany earlier this summer. “It was a very rigorous tour,” says Cox, “but they rose to the challenge.” The Chorale gave performances in Berlin, Leipzig and Frederick’s sister city, Schifferstadt.  The repertoires were different in each venue, including singing in German for the Berlin concert.

The Chorale’s next local concert is Dec. 3 and 4 at St. John’s Catholic Church, 118 E. 2nd St. A gala is planned for late next spring as part of the anniversary. www.frederickchorale.org

The 9th annual Stuff the Bus campaign resulted in 10 filled school buses, double what was collected last year. School officials say the outpouring reflects an understanding by the public that the best poverty-prevention tool we have is education.

The Frederick County Public Schools’ Community Agency School Services Program partnered with United Way of Frederick County in this year’s drive. “It just keeps growing,” marvels Joyce Kwamena-Poh, director of operations at United Way. “When I started here three and a half years ago, we did just two buses.” Last year 57 businesses participated and this year 20 more jumped in to help. “We had one bus just to carry what FMH (Frederick Memorial Hospital) collected.”

Race For Every Child

Eleven-year-old McKenzie Mollica is celebrating her third anniversary of completing treatment for a brain tumor by giving back to Children’s National Health System in Washington, D.C. where she received her care.

On Oct. 21, the New Market youngster and her family will be part of the 5th annual Race for Every Child, a 5k run/walk at Freedom Plaza on Pennsylvania Avenue.

“It will be a mix of walking and running, we’re not super-athletic people,” McKenzie says, adding that it’s encouraging the way the doctors and other hospital staff also take part. Seeing them outside the center “is like running into your teacher in the grocery store,” she says, adding that she has developed friendships through her treatment. “They call me Mackie.”

McKenzie is the daughter of Rachel and Travis Mollica and has an older brother and three younger sisters. “It’s a lot of fun, a family day,” Rachel says of the race, “and it’s nice to see the doctors and nurses outside the clinic. … They worked with us through everything, making us feel more at ease.”

“McKenzie was six when her parents became concerned when she started showing signs of precocious puberty,” according to staff at Children’s National. An MRI showed she had a brain tumor and because it was in a non-operable area, doctors recommended 15 months of chemotherapy. She continues with regular check-ups at Children’s and has stable brain scans since completing treatment.

Over the past four years, the Race for Every Child has rallied a total 10,850 runners and walkers and raised more than $4.3 million for the medical facility. www.raceforeverychild.org

Beer, Brats and Bands  Get Your German On

Just as everyone’s a little bit Irish on St. Patrick’s Day, this time of year all people are a little German when Frederick’s Oktoberfest arrives with its beer, bratwurst and bands that get the crowd dancing.

Event vice chairman is Ashley Waters, who will take the lead role next year from Amy Benton who has spearheaded the effort for several years. Crucial to Oktoberfest’s success each year are the legions of volunteers. Waters says more than 600 people run more than 1,000 shifts. “It’s a big undertaking,” she says, for an event that draws between 6,000 and 7,000 guests.The effort is worth it. Last year, Oktoberfest and the Tour de Frederick bike race raised $90,000 for Rotary’s community projects.

New this year was a decision to “change up the entertainment,” Waters says. German music with its polka and chicken dance will certainly be front and center, but there will also be a contemporary vibe with Fuzzy Match performing Friday night and The Reagan Years Saturday night. Also new is the option of purchasing a three-day pass for $40, allowing “people to spend the weekend with us,” Waters says.

Last year’s German heritage tent was so popular that it will have double the space this year. Visitors can learn about beer and how to make sauerkraut, as well as take part in a German spelling bee. Vendors will set up shop and a kid zone where pumpkins can be decorated and scarecrows designed will also be part of the fun. Food will include all the German favorites from sausages and sauerkraut to strudel. www.frederickoktoberfest.org