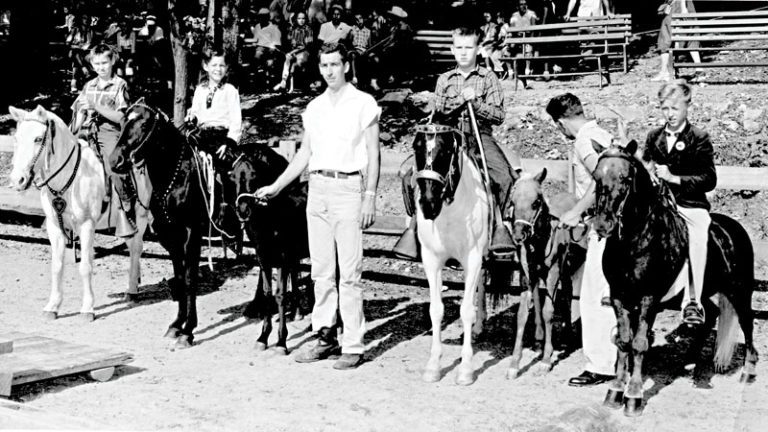 Braddock Heights was one of the first planned communities in the United States, founded in 1896 by developer George William Smith as a summer resort town. The original town plan included several hotels, a community pool, a wooden-floor skating rink, an amusement park, scenic overlooks, nature trails and a small ski resort.

One element of the entertainment pictured here were the horse trails. The park mostly offered pony rides for children in a semi-enclosed track, so the experience was neither dangerous nor dependent on any previous skill. Smith also built the Hagerstown & Frederick Railway, a trolley system designed to allow easy access from the City of Frederick to Braddock Heights, with other routes throughout the region.

After World War II, business at the amusement park began to suffer, partially due to discontinued trolley service in 1946, and Braddock Heights evolved into a typical town with permanent residents. In 1980 most of the ski resort buildings were destroyed in a fire, and in 1998 an arsonist’s fire destroyed the Stargaze Skateway, at the time the oldest skating rink in the country. Today, Braddock Heights has become an artists’ community like other former Maryland resorts, like Glen Echo Park and Pen Mar Park. But Braddock Heights does retain individuality as the roost of the Snallygaster, a mythical dragon/bird-like creature said to be responsible for the disappearance of livestock and assorted fires throughout the Middletown Valley.