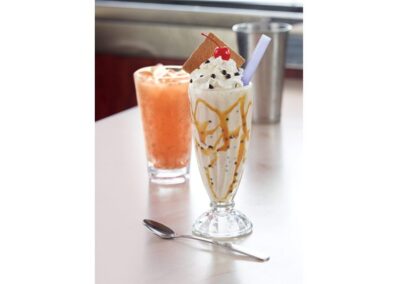 By April Bartel | Photography by Turner Photography Studio and Silver Diner | Posted on 08.09.17

Well before fast food giants planted signage along every highway and byway, diners were fully entrenched in American culture, and they go back further than you probably think. The diner concept was originated with Walter Scott in Providence, R.I. in 1858. According to the American Diner Museum, Scott was a part-time pressman and type compositor for the local newspaper.

At 17, he supplemented his income selling sandwiches and coffee to night-shift co-workers. This side business became so lucrative that he quit his job at the paper to focus on feeding the masses. He converted a horse-drawn covered wagon in the spirit of cowboy chuck wagons, and parked it outside The Providence Journal offices. His success encouraged other entrepreneurs as the idea spread across New England.

Soon, companies were selling improved lunch wagons with inside seating for guests. When cities initiated regulations, owners parked the wagons, called “Nite Owls,” in semi-permanent locations. They got creative, converting old trolleys and railroad dining cars, or “diners.” It wasn’t until the 1920s when these rough-and-ready eateries took on the air of chrome-splashed, art deco glitz and vibrancy we know today. Around the world, diners have become the icon of quintessentially American food: burgers and shakes, creamy grits, steak and eggs, tall cheesecakes, and mountains of pie.

Friends Bob Giaimo and Ype Von Hengst, an established restaurateur and executive chef, respectively, fell in love with diners. They decided to open one for themselves and began a cross-country tour, visiting over 500 diners as research. They opened the first Silver Diner in Rockville in 1989, then expanded into Laurel and Potomac Mills, Va. They served traditional diner fare with flair, successfully adding locations over the years. Today the pair owns a chain of 15 restaurants spread from Richmond, Va., to Cherry Hill, N.J. The Frederick location celebrated its one year anniversary in July.

The company experienced ups and downs along the way. By 2010, it was feeling the crunch of recession, like most other restaurants. Hearty portions of comfort food weren’t enough to draw the crowds, so other options were evaluated. The diner could either slash prices or innovate with new menus and improved quality. They took a chance, moving up the ladder rather than down.

“Everywhere we could, we swapped in healthier or local ingredients,” says Joe Howell, Sr. marketing manager for Silver Diner. “Even things that go unnoticed got an update, like unbleached flour in the pancakes.”

It’s been a challenge to balance traditional favorites with modern demand, but the company continues to evolve and thrive, while seeking customer feedback. “We interviewed thousands of guests,” he says, noting requests for gluten-free, vegetarian/ vegan and under-600-calorie options. The company also partners with more than 15 local farms and suppliers for fresh produce, meat and bread that comes from a one travel-day radius.

The menu development process is fairly extensive, but chef Von Hengst holds the line on taste. “If we changed something and heard that guests didn’t enjoy it, we would modify it right away,” says Howell, giving an example. “We tried many different recipes for gluten-free French toast, for years. It was never quite good enough. Then, in 2015, we found a bread that worked. Now the Paradise French toast is gluten-free.” Other top breakfast sellers are pancake combos and the bison huevos rancheros, which Howell notes is one of the most popular items ever introduced.

Another updated comfort food classic is the chicken pot pie. Roasted chicken is shredded and mixed with veggies, such as delicate summer squash and savory mushrooms, in an updated cream sauce, then encased in a thin, flaky shell. Howell counts their burgers as “second to none.” Guests can build their own burger, starting with antibiotic- and hormone-free beef from Creekstone Farms, or bison, chicken, turkey or veggie burgers. Menus change twice a year. The spring menu includes a lamb merguez sausage until offerings refresh in October.

There was some pushback on the wholesome overhaul, but customers have been generally receptive. They’ve embraced items like the warm roasted veggie salad and healthier options on the kids’ menu as complements to enduringly indulgent hand-spun milkshakes and deluxe mimosas. Now they have a hard time keeping champagne in stock. There are four flavors of mimosa and the seasonal Campfire shake is made with mini malted balls, graham crackers, caramel and luscious ice cream. “It’s as good as it sounds,” sighs Howell.

The Silver Diner’s loyalty program, called “Eat Well, Do Well,” started in 2004. The mobile app launched in 2015. Patrons get a unique code and earn one point per visit. Five points equals $5 off the check. Members also get a free entrée on their birthday. Points are earned for eat-in and carry-out, as well as for engaging on social media. Says Howell, “We call it social rewards and it all accumulates to the same account.” Fans can tweet the hashtag #muchmorethanadiner or post pictures on Instagram.

The loyalty program’s members also get to choose schools that benefit from a percentage of restaurant sales. Howell points out that restaurant locations are chosen for high-density populations with many families be-cause “our operators and general managers live close to their locations, and they are a part of the communities we serve.” The restaurant partners with nonprofits for fund-raisers, too.

Gambling on changes worked out well for the Silver Diner. In addition to opening a location at Baltimore-Washington International Thurgood Marshall Airport for travelers, the company introduced a higher-end version of its brand in Bethesda, simply named Silver. Another Silver is slated to open this month in Cathedral Commons on Wisconsin Avenue in Northwest Washington, D.C. A private capital investment group recently signed on with the owners to speed up the expansion process to other locations. When asked about plans, Howell confirms that several additional sites are “near certainties” in the region.

Walter Scott would be proud.