A Haircut Makes a Difference 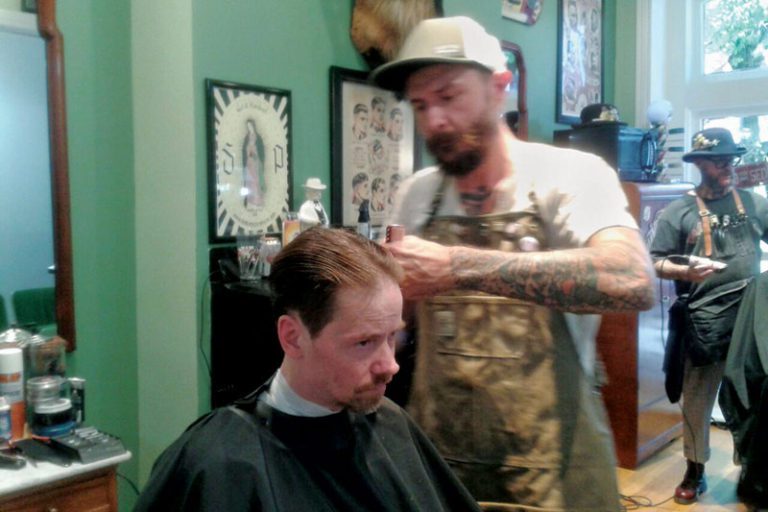 Money for a haircut comes at the bottom of the list when it’s a struggle to afford basics such as food and a place to live, but Frederick’s population living on the edge has a friend in Ladies and Gents Downtown Hair Co., 23 E. Patrick St., owned by the husband-and-wife team of David and Dena Brockhoeft.

On the first Monday of the month the shop gives free haircuts to those who can’t afford them, working with nonprofit On Our Own, “a state-funded, peer-support wellness and recovery center,” says director Eric Wakefield. “We deal with a lot of folks with homelessness and chronic mental health issues.” He calls it “a last-stop, one-stop shop” where training and education are also part of the offerings. “Lots of times having a safe place to be with people facing similar challenges is helpful.” The center, at 331 W. Patrick St., served 380 people last year.

Wakefield is speaking as he and outreach coordinator Cindy D’Aquino stop by the shop to see On Our Own clients being transformed by David Brockhoeft and fellow barber Jason Stevens. D’Aquino recalls a man who received the first haircut. He constantly wore a hat, something he abandoned after his makeover. “Now he’s standing a little taller,” she says. Brockhoeft makes a similar observation, saying a good haircut “makes you want to strut.”

Russ Bennington settles into the chair. His locks are long and it has been awhile since his last haircut, although he says he once had hair to his waist. “I’m going to go pretty short,” he says.  Soon he and Stevens are connecting by talking about shared experiences playing in bands and discussing the tunes being played over the shop’s sound system. Bennington gets the royal treatment, right down to good-smelling tonic applied to his neatly trimmed head of hair. He looks in the mirror, pleased. He says thank-you and walks outside to show off his new look.

The Brockhoefts are excited by their haircut project and Dena recalls how one man told her he had a job interview the next day and that the haircut was a blessing. Weeks later, he returned to the shop with the news that he got the job. He sat down for another haircut, this time taking money out to proudly pay.